Dr Tijana Blanusa is a RHS Fellow in the School of Biological Sciences. Her research interests include the role of urban greening in the mitigation of heat island effect; gardens and microclimate; understanding the physiological responses of ornamental plants to water deficits; and improving the establishment of ornamental plants.

The University of Reading and the Royal Horticultural Society (RHS) have teamed up at this year’s Chelsea Flower Show (22 – 26 May 2012), to showcase their research into the effect of plants in urban environments.

I work in a very privileged position for a scientist – based at the University and allowed the luxury to follow sometimes quirky questions, but working for a big charitable organisation and hence asking those questions grounded in reality, on behalf of the people we strive to support. For the last few years my work has focused on understanding plants in the urban environment and their contribution to provision of several ‘ecosystem services’*. The aim is to inform and encourage wide and thoughtful use of plants in the domestic and public (urban) context. 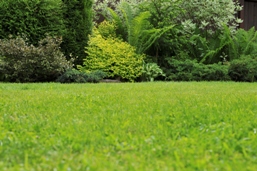 Even in the busiest and most populated of Western cities, a surprisingly high proportion of their surface is covered in vegetation (almost up to 50% in some cases). Furthermore, in the UK, almost half of those urban green areas are made up of private gardens. Hence what we grow in our gardens and public green spaces and how we manage them can really impact on our environment on many levels, both positively and negatively. In my job I question general assumptions on what urban green spaces (and domestic gardens in particular) do and don’t do, and challenge advice given to people involved in managing any sort of green space.

There is very sound scientific evidence about a number of ‘services’ that urban vegetation can provide; it is well established for example that vegetation moderates air temperatures, helps insulate buildings against the extremes of weather, supports and enriches urban biodiversity and human health. So the common public perceptions that parks, street trees and green domestic spaces help lower summer temperatures locally are supported by largely unanimous scientific evidence. The scientific questions remaining there lie, for example, in the need to tease out how vegetation works at various spatial scales (e.g. locally, next to the individual house, or on a neighbourhood or whole-city scales) and how various ‘services’ provided by the vegetation can be best combined. However, the way our urban green spaces and private gardens are managed (i.e. how much water, energy etc. is consumed in their management) greatly influences the level of their potential environmental benefits (with higher inputs often meaning that the benefits decrease).

To showcase the interest that the University of Reading and the Royal Horticultural Society have in researching plants in the urban environments, the two organisations are, for the first time jointly, organising an exhibit at this year’s RHS Chelsea Flower Show (22 – 26 May 2012). Our display ‘Keeping their cool: how the plants in urban environment help reduce temperatures, control flooding and capture pollution’ will be featured in the ‘RHS Environment’ section of the Flower Show. We will be attempting to provide some answers to the following questions: why urban gardens matter, what do plants contribute to the urban environment and how do they do it.?  We will also reinforce the view that not all plants act in the same way, so that a variety in plant form, structure, habit, colour etc. is likely to provide the best overall ‘service’ to the urban environment. So if you are interested, come and see us there.

*Very broadly speaking ‘ecosystem services’ can be thought of as benefits that humans derive from resources and processes that are supplied by ecosystems. In some scientific literature, the term ‘ecosystem disservice’ is also used to balance the arguments and describe functions of ecosystems that are perceived as negative for human well-being.