The communication of science is almost as important as the science itself. Especially when dealing with issues like climate change that affect us all and in whose solution we all have a part to play.

But not everyone likes looking at graphs and tables so we teamed up with poet and spoken word artist Dan Simpson to create a poem based on forecasting and flooding research:

Or you can listen to Professor Hannah Cloke and Maria Ferguson read their poem Today’s the Day it’s Supposed to Rain.

This poem which was created as part of Experimental Words, a collaboration which paired leading scientists and incredible poets to make this spoken word album.

More of Dan’s work with scientists (and others) can be seen on his website. Another innovative approach exploring the meeting of science and the arts is Consilience Journal. This features poems about science all linked by a common theme, written by poets of all backgrounds, to help make both the poetry and the science accessible to all audiences.

Science doesn’t happen in isolation, mostly what we’ve talked about has been the result of lots of people working together building on past discoveries. The job of communicating science is no different. The digital flood simulator is based on an earlier art science project developed by Louise Arnal (who is now at the University of Saskatchewan) and Stuart Mitchel of the European Centre for Medium Range Weather Forecasts. Louise made all the pictures for our flood simulator while Stuart worked out how to create a digital version of this. We’d like to offer our grateful thanks to them for working with us to convert this into an online experience.

Using art to communicate the importance of climate change doesn’t have to involve a large project team though. Chloe Brimicombe has written about her experience of communicating climate change through the use of images freely available on the internet. 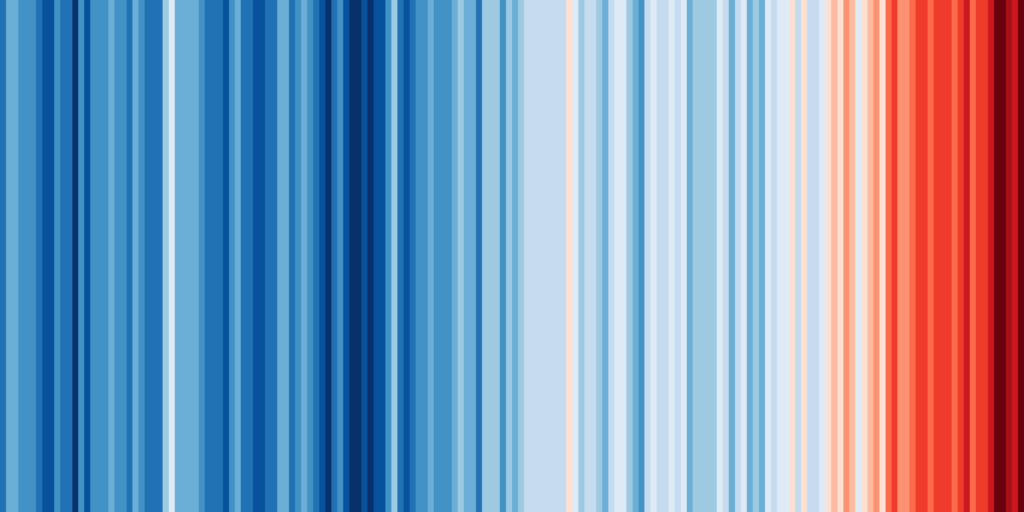 Visuals can be much more directly linked to data like the Climate Stripes, created by University of Reading Professor Ed Hawkins. These show the global average temperature for every year since 1850 in the form of coloured stripes. Each stripe represents a year and blue stripes show cooler than average years and red stripes warmer than average years. From this it’s easy to see that as we move to the present there are more warmer years than cooler years.

Since their creation the stripes have been seen all over the world from international conferences to the main stage at Reading Festival. You can create a customised version of the climate stripes for your area at the Show Your Stripes website.