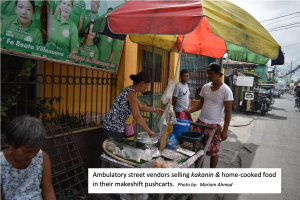 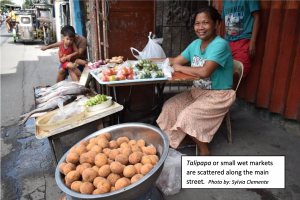 I always ponder on the many contradictions of this small barangay located along the lake shore of Laguna Lake. The first time we visited it’s impossible not to see it as one of the poorer barangays in Santa Rosa as you are greeted by the very narrow streets and alleys, old bridges that cut across a number of silted esteros, dilapidated wooden houses, street hawkers peddling food, and children playing on the streets.  It’s a lively community with its public space full of life as people go about their day-to-day activities and the ubiquitous tricycles darting in and out of the main street. 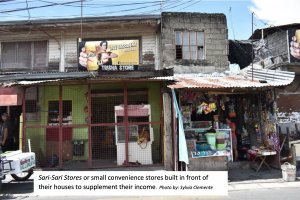 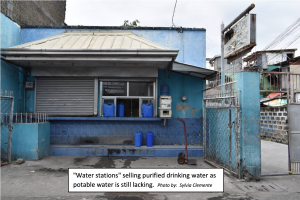 The main street is the heart of the community and is where you get a glimpse of its character.  Churches of all denominations from Iglesia ni Cristo, Aglipayan Church, to Born Again, line up along this busy street.  The people are very religious, friendly to outsiders, are generally content and do not demand much from the government.  They live and co-exist peacefully regardless of religious denominations.  In a nation that is predominantly Roman Catholic (around 70% because of Spanish colonization), this small barangay appears to be an anomaly. 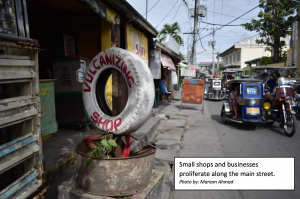 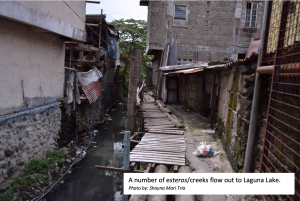 They are resourceful, hardworking, resilient, and self-reliant, no doubt. You can see sari-sari stores(convenience stores), talipapa(small wet markets selling fish, vegetables, and carinderia/home-cook food),  water stations (selling purified drinking water for lack of potable water with majority still using artesian wells), and ambulatory vendors with their makeshift pushcarts sellingkakanin/street food.  Some of the residents work abroad as domestic helpers to support their family back home; the young with limited schooling work in the factories in the light industrial park of Santa Rosa.  Others work in offices,  while some have their small businesses (formal and informal).  There are fewer and fewer fishermen now, so I am told, as Laguna Lake becomes less sustainable for fishing because of its environmental problems (siltation, illegal fishpens, pollution from industries, etc.).  I have personally witnessed the environmental degradation when I went around the Laguna Lake with a fisherman. 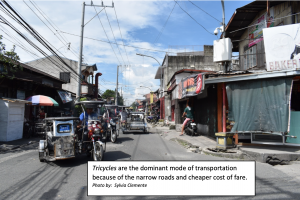 For now, the local government approved a PPP (public-private partnership) eco-tourism project to be built along the lakeshore which will reclaim and transform it into a mixed-use/recreational park.  The newly elected barangay president of the Bantay Lawa, a volunteer group of fishermen that police the Laguna Lake against illegal activities, is in favour of it as it will provide them with open/recreational space.  They reminisce about their childhood days when the lakeshore with its parola  used to be a place where people would stroll and rest at the end of the day.  It was a time when the lake was still clear and pristine with an abundance of fish and marine life.