From Italy to Britain I

Winckelmann fell in love with ancient art in his native Germany through texts and portable antiquities, such as coins, which he studied in the library of his first patron, Count Heinrich von Bünau. Renaissance antiquarians avidly collected ancient coins as well as gems and cameos, which they prized for their beauty and precision as well as the historical information they offered. Across Europe, learned men circulated impressions and engravings of gemstones, and in later centuries the gems themselves. In Winckelmann’s time Italian formatori (cast makers) began to produce and sell sets of casts of ancient gemstones. Winckelmann himself helped the craftsman Philipp Daniel Lippert, a friend from Saxony, to produce a ‘dactyliotheca’ or set of 3000 gem impressions for the use of scholars and artists. Such sets were collected across Europe and inspired artists to produce new, neoclassical images, from which in turn casts were taken, so that it is difficult to distinguish the ancient from the neoclassical. 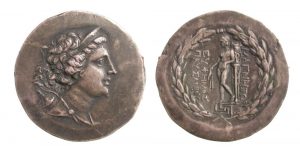 From 1775, the British sculptor John Flaxman adapted classical and neoclassical images in modelling reliefs to decorate Josiah Wedgwood’s jasperware, which remains in production today. Flaxman’s illustrations of scenes from Homer, published in 1793 while he was in Rome, however, brought him lasting fame throughout Europe.

Winckelmann considered coins to be the truest witnesses of antiquity since they were authentic artefacts that could be dated reliably according to inscriptions and images of rulers. They were crucial sources for his reconstruction of a four-phased development of Greek art according to period styles. He commented on the retrograde (backwards) writing on some Sicilian coins, which, together with the stiff figures, evidenced their very early date. Syracusan coins exemplified the next, ‘noble’ phase, which culminated in the work of Pheidias, sculptor of Hera’s cult image (ca. 450 bc), the head is which is copied on coins of Argos.     In the case of a coin from Magnesia, the absence of Apollo’s name from an inscription alongside his statue—ΜΑΓΝΗΤΩΝ meaning ‘[Apollo] of the Magnesians’—confused Winckelmann. But he recognised the seated image of Pheidias’ Olympian Zeus on the coins of Alexander the Great: ‘so much divinity is modelled into the small features of his face’. The regal yet benevolent image of Zeus’ head on a Hellenistic coin from Knossos belonged to the next, ‘beautiful’ phase.