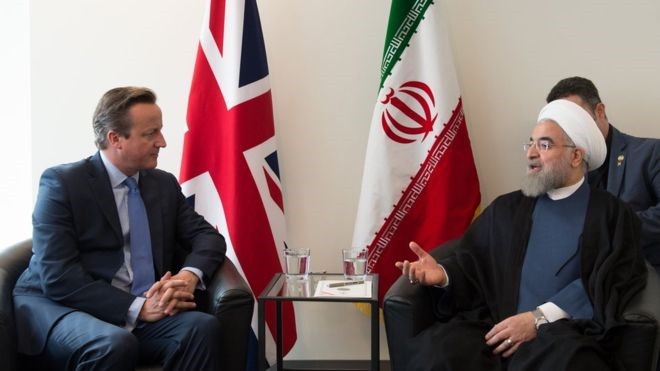 In September 2014, the then British Prime Minister, David Cameron, met with the Iranian President, Hassan Rouhani, as part of attempts to improve Anglo-Iranian relations. The meeting in New York was doubtless significant. It was the first time the leaders of both countries had met since the 1979 Iranian Revolution, when an Islamic government opposed to the UK replaced the pro-western Shah of Iran, Mohammad Reza Pahlavi.

The gathering in New York, despite the oft-cited tensions in Anglo-Iranian relations, formed part of much broader efforts by the British government to foster ties with Iran since 1945. During the early and middle stages of the Cold War, for instance, the Shah’s opposition to communism made him a vital ally in the struggle against the Soviet Union in the Middle East. The USSR had also provided significant funding to the Iranian communist party, the Tudeh (Masses), which Iran’s monarch had outlawed.

UK policymakers regarded the Foreign Office’s Information Research Department (IRD) as pivotal to efforts to improve Anglo-Iranian relations. Established in 1948, this open source intelligence agency strove to combat communist propaganda, discredit the Soviet Union and promote British values domestically and overseas. IRD officials sought to achieve these aims by working with prominent individuals and organisations at home and abroad who shared their concern towards communism. SAVAK, the Iranian secret and intelligence service, was one such agency. Established in 1957 at the Shah’s behest, SAVAK dealt with external intelligence threats and monitored domestic dissidents. Then Director, Hassan Pakravan, had already approached the Foreign Office to request the IRD’s assistance in dissuading Iran’s public from communist thinking and Soviet sympathising. Pakravan had spent his formative years being educated in British and French boarding schools and as a result of his privileged education, he possessed staunch pro-western views with an extensive network of European contacts in influential political positions.

From the early 1960s onwards, the IRD sought to work with SAVAK on a bilateral basis. Officials in London seconded Donald Makinson, an operative in the Foreign Office Department, to the British Embassy in Tehran. The IRD had two reasons for deploying him in particular to the Middle Eastern country. First, as a fluent Farsi speaker, Makinson was able to translate and edit anti-communist literature sent by the IRD in London to make it appropriate for distribution in Iran. Second – and more importantly – was Makinson and Pakravan’s close rapport, the latter promoted to Director in 1961. Since SAVAK’s 1957 conception, both figures had frequently corresponded with one another regarding the production and dissemination of propaganda.

Within months of Makinson’s February 1962 secondment in Iran, the IRD and SAVAK were instrumental in establishing a writers’ panel in Tehran. Composed of prominent, influential journalists, editors and columnists from Iran’s three largest newspaper publications – The Tehran Times, Kayhan and Ettelat – the panel met monthly. SAVAK officials would provide these journalists with stories and information that extolled the virtues of the Shah’s regime. Figures who attended these monthly meetings would receive ‘snappy and informative’ 10-12 page booklets that would provide suggestions for possible stories, as well as potential angles to take on these reports. Between November and December 1964, for example, articles appeared in the Farsi and English editions of The Tehran Times and Kayhan. These would warn readers of the Soviet Union’s dissemination of pro-communist propaganda across Iran and the wider Middle East. In particular, both newspapers’ readerships were urged to watch out for Farsi translations of Russian books and films.

Makinson, moreover, was instrumental in persuading Pakravan to send SAVAK officials to Britain to attend training sessions on the production and dissemination of propaganda. Makinson argued that this was the most effective way of ensuring that middle and high-ranking SAVAK figures would be adept at producing propaganda with little IRD input in the long run. In May 1963, selected officials from the Iranian secret and intelligence service were flown over to the UK to commence a two-week training course. IRD officials taught the Iranians how to construct and publish effective propaganda. Sessions were given on the importance of persuasive techniques, the importance of translating western novels and the distribution of books, leaflets and other literature through third parties.

IRD-SAVAK collaboration, however, was a two-way relationship. The Iranian agency was instrumental in persuading their British counterparts to assist them with the countering of Arab Nationalist propaganda. The Cold War neutrality espoused by the Iraqi and Egyptian regimes concerned Pakravan. He feared it would spread to Iran, making the country vulnerable to Soviet penetration.

SAVAK’s request for IRD assistance to combat Arab Nationalist propaganda placed the Foreign Office department in an awkward position. As this request did not pertain to anti-communist propaganda, it went beyond what the agency was established to do. Yet the IRD acquiesced to SAVAK’s requests. If they refused, officials in London feared that it would lead to a dilution in collaborative efforts between both agencies. They had also become increasingly concerned at the thawing of Iran-Soviet relations. In September 1962, the Shah pledged to USSR’s then leader, Nikita Khrushchev, that no American missiles would be placed in Iran.

The two-way nature of IRD-SAVAK collaboration masked the issues blighting their cooperative efforts. Crucially, staff shortages meant that the booklets handed out to Iranian journalists in the writers’ panel meetings were often not of the required standard. Many of the articles produced from information supplied in these meetings were poorly written and uninspiring, doing little to harden the views of readers towards Soviet style communism. More broadly, IRD-SAVAK collaborative efforts were undermined by the United States. Despite the Anglo-American ‘special relationship’, there were significant tensions between the UK and US in the Middle East. Both countries worked together on the larger regional issues – most notably in fighting the Cold War – but wrestled with one another for supremacy in the Middle East. The US State Department, cooperative with the IRD in other countries, discouraged SAVAK from sustained collaboration with the British agency. Arguing that the propaganda produced was provocative, they claimed that these projects would antagonise Arab Nationalist regimes in the Middle East, attracting them towards the Soviets. Iran, they claimed, would be more isolated, left with fewer regional allies.

Such an agency led approach meant that IRD-SAVAK collaboration was short-lived. In 1965, Makinson was promoted to a more senior position in the Foreign Office in London, with no other IRD official willing or able to succeed him. In 1966, the Shah appointed Pakravan as his Minister of Information. His successor, Nematollah Nassiri, was suspicious of IRD motives in Iran, convinced the department was seeking to meddle in Iranian affairs.

Despite this, three key themes can be ascertained through analysing IRD-SAVAK collaboration in this period. First, it illustrates the importance that Foreign Office figures placed on Anglo-Iranian relations in both fighting the Cold War in the Middle East. Second, the IRD’s assistance in the production and dissemination of propaganda in Iran underlines the value that British policymakers placed on what political scientist Joseph Nye termed soft power. Fearful of the pro-communist content produced and peddled by the Soviet Union, IRD officials strove to persuade Iranians towards a style of thinking they deemed more preferable. Third, an analysis of IRD-SAVAK collaboration reveals the tensions present in the Anglo-American ‘special relationship.’ Fearful that the British sought to be the dominant Western power in the Middle East at the US’ expense, State Department officials sought to limit the effectiveness of the Foreign Office’s initiatives in the region. In the case of propaganda produced by the IRD and SAVAK, American officials sought to discourage the Iranian agency from working with their British counterparts. Arguing that such collaborative efforts would escalate regional tensions, State Department figures rejected British requests to work with the Iranians in this field. Such an approach to Anglo-Iranian interactions highlights the ‘competitive collaboration’ evident in UK-US encounters. Sharing a near-identical perspective on international affairs, Britain and the United States worked together to limit the Soviet Union on the world stage. Underneath this unified approach to global proceedings, however, both British and American policymakers sought to be the dominant partner.

Written by Darius Wainwright, PhD student at the University of Reading