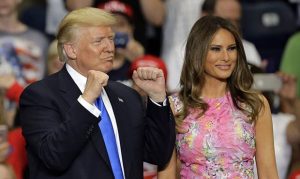 een scanning the latest headlines on President Trump and a presidency that history may well record as the car crash to end all car crashes. In the past few days he has publicly humiliated his Attorney General, while his Secretary of State is rumoured to be on the verge of quitting. His Press Secretary – and a senior assistant in that team – have quit, to be replaced by a Wall Street financier with no communications experience (but who appears to be straight out of central casting for The Godfather).

In legislative terms, Trump has pushed the Senate to vote on a Healthcare Bill (forced through on the casting vote of the VP) without any detail on what the Bill contained or discussion about it. Yet the chances are that his efforts to Repeal and Replace Obamacare could well still die in Congress. At the same time, the House has voted 416-3 on a Sanctions Bill on Russia, Iran and North Korea – a Bill that the President is contemplating not writing into law. If he does that, he may find Congress summons up the votes to override his veto.

Meanwhile, the President’s much-trumpeted tax legislation has yet to progress; the Mexican Wall remains a pipe-dream and, in fact, six months into his term in office, Trump has failed to land any major legislation. And what’s clear is that he doesn’t seem to be enjoying the job at all. But should we be surprised?

Donald Trump came to prominence as the scion of a family empire where his wishes were never questioned. He surrounded himself with people who were prepared to take the money and not challenge his opinion – and his intent was to take that style to Washington DC. His inner circle encompasses his family – a very few outsiders. Those such as his new Director of Communications, Anthony Scaramucci, are tolerated so long as they present no threat – and certainly Scaramucci has gone out of his way to sell his soul on prime time TV since last weekend to prove his loyalty to Trump. And loyalty is the key word. Trump is threatened not just by those who are more intelligent, but by anyone who might have their own power base outside his circle – too often they’re the butt of his increasingly intemperate tweets. and as exemplified by his treatment of Jeff Sessions, he’s a bully who exerts his power not through witty repartie and searing intellect, but through aggression and humiliation. It might work for a New York development project, but is significantly less effective when you are supposed to be the Leader of the Free World and are operating under 24/7 media scrutiny.

Fair play to Trump. He seemed to have got away with it up to this week. But since last Friday, there has been a pretty perceptible shift in his behaviour – which has largely arisen from the realisation that the investigation into his campaign’s links with Russia, led by Special Counsel Mueller, seems to have the power to requisition and investigate Trump’s finances. Why has that spooked the President? What does he have to hide?

Other than his increasingly questionable surrogates, President Trump appears to be the only person on the planet still questioning whether Russia attempted to intervene in the US election. Actually that’s not fair. Anything up to 35 million people in Heartland America seem not to care a jot about ‘Russiagate’ either – but I’ll return to them presently.

This week has already seen ‘behind-closed-doors’ appearances from Jared Kushner before both the House and Senate’s Intelligence Committees. We’re about to be treated to former Campaign Manager Paul Manafort and Donald Trump Junior’s testimony on the Hill too, though it appears this will be out of the public’s view…at this stage.

Democrats in DC are seeing the vultures circling and talking about impending impeachment, while Trump’s advocates staunchly state the whole Russian-connection investigation is a ‘nothingburger’. So why the increasingly-rattled Trump and his perceived chain of action that could see Jeff Sessions resign under presidential pressure; a new Recess-appointed Attorney General, and that person firing Robert Mueller and making the whole investigation go away?

It all comes down to the Trump finances – we’ve yet to see Trump’s tax returns, and if he has his way, we never will. What if, just for speculation’s sake, those returns and the abundance of corporate information around them, showed that Trump’s family businesses raised money in Russia to fund his developments. How far could Mueller follow the trail to investigate how clean that money was? And what if money flowing through the Trump accounts as he sold properties originated from the accounts of Russian oligarchs and was polished and shined as it emerged, freshly pressed from a wash and spin in the Trump financial laundry. Pure speculation of course, and at this stage there is no evidence to corroborate this train of thought. But what if? Would it be treason?

Treason would be very difficult to prove under the very tight US definition of treason which states:

By Section 110 of Article III. of the Constitution of the United States, it is declared that:

“Treason against the United States shall consist only in levying war against them, or in adhering to their enemies, giving them aid and comfort. No person shall be convicted of treason unless on the testimony of two witnesses to the same overt act, or on confession in open Court. The Congress shall have power to declare the punishment of treason.”

Is Russia the ‘enemy’? Could Trump be seen as giving them aid and comfort? There are those saying that even proving links to involvement in election manipulation could be seen as treason. Couple this with the worst that could emerge from a deep probe into his finances, and no wonder Trump has been casting around for opinion on whether he can pardon both himself and the rest of his inner circle!

But we’re far from there yet. The febrile nature of DC politics hasn’t yet made it to Nebraska, or the Rust Belt or the Red counties of Texas. In the Heartland, while Trump may not yet have fulfilled his campaign promises, he hasn’t yet done his base wrong. Across social media, through alt-right radio and in the right-leaning press and TV, they rush to his defence, even when the ‘fake news’ is proven to be true – cf Don Junior’s release of e-mails relating to his pre-election meeting with a Russian lawyer.

Over the past six months in office, Trump has normalised the irrational, the intemperate and the unwise – and his base have loved him for it. Yet in the coming months, repeal of the ACA will bite at that base hard. Tax changes look set to favour the wealthy – and again, will hit the base hard. And still the swamp continues to fill with Wall Street billionaires, while the Mexican Wall continues to look great…but only on paper. If the base turns, Trump’s game could be up. Not because of any more negative headlines, but because it will lose him the support of GOP Representatives whose sole loyalty is to getting re-elected in the 2018 Mid-terms. If abandoning Trump will secure their seats, then that’s what will happen – and fast! So far they have backed the President because it cements the Republican stranglehold over the levers of power. In theory the Presidency is their greatest strength. It could yet turn out to be the GOP’s most massive weakness.

Six months in, and Trump is far from finished. The breezes are just picking up and not blowing the way he wants. They could bring the whole Trump House of Cards down. If that happens, it will be quick and Trump could be gone without warning. I suspect we won’t see any long-drawn-out impeachment process. It just doesn’t fit the style of a President quite unlike any other.