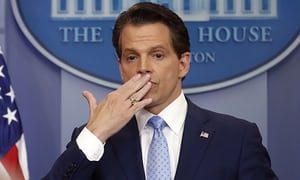 eek into Anthony Scaramucci’s tenure as President Trump’s Director of Communications, perhaps the only full week he’ll serve, as incredulity at this latest turn in the Trump White House soap-opera has already turned to high farce with Mooch’s expletive laden on-the-record interview with The New Yorker’s Ryan Lizza where he firmly set his sights on ridding the Trump Administration of Chief of Staff Reince Priebus, and political svengali, Steve Bannon.

Scaramucci has launched himself into one of the hottest hot seats in global political communication – but seemingly with no grasp of either Journalist, nor Organisational Communications, School 101. As someone who spent over 20 years in corporate communications prior to heading into academia, that appals and saddens me. Scaramucci is seemingly ignorant both of how the media operates (nothing is off the record until both sides have agreed that’s the case), and of what makes a great spokesperson, be it for a corporate or a president.

Now Mooch is clearly a pal of the President, albeit politically, it seems he’s a very recent one. You can almost imagine his pitch for the Director of Comms role: “Hey Mr President. I can walk and talk at the same time. Give me enough access and I’ll spit out whatever you want me to, with a big grin and a warm, Italian, touchy-feely tone that’ll have the White House reporters eating outta my hand! Capiche? How hard can it be?”

Well, if you know nothing about it, pretty hard, as Anthony’s  first week in big school has shown. Here are just a few lessons he should have learned.

Anthony Scaramucci’s performance so far is more the fire cracker than the Saturn V rocket. Maybe he’s a quick study. Maybe, as some journalists contend, he’s not in Trump’s pocket, but a tool for Jared Kushner and Ivanka Trump in the power struggle with Bannon and Priebus. Perhaps he has been the perfect deflection in a terrible week for the Trump presidency. What he’s not, and I suspect will never be, is an effective Director of Communications. But there again, this White House is consistent only in its surprises. It’s a circus, and Mooch is the new clown in town.