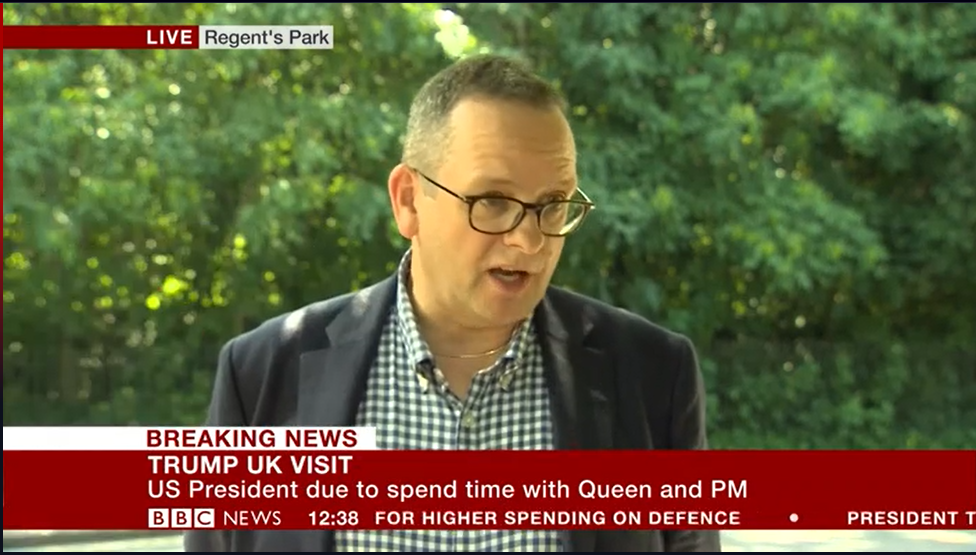 Associate Professor Mark Shanahan has today been in London on BBC News giving expert coverage of President Trump’s arrival into London ahead of his four day visit, his first to the UK as President. Discussions included topics such Trump’s over exaggeration of US defence spending, trade, and what the UK government should expect from his (diplomatic) visit. One prominent piece of advise Mark gives is that we must respect this visit as one from the Office of the Presidency despite the ‘deeply flawed individual’ who currently heads it –  we must go beyond the individual,;this is a visit about diplomacy and the cementing of relationships:

I have the clipboard. I'm almost official as 'presenter's friend' working with @BBCNews ouside the #US Ambassador's Residence in Regent's Park in the run-up to @realDonaldTrump's arrival. On air from 11.30am. In latest news, just seen a motorcade depart. @USAmbUK off to airport? pic.twitter.com/m0Tvr7YNe9

Who's been watching @LeapfrogMark on @BBCNews talking on #TrumpUKVisit? There's been lots to talk about so far! Suggestions are that May and the UK gov can't expect too much from the visit – it is mostly a photo opportunity however it could pave way for discussions after Brexit pic.twitter.com/UCGueHBlJJ

Trump Lands in the UK!! A huge American presence has arrived. As @LeapfrogMark says while a 'deeply flawed individual' will be coming down those steps, 'we have to go beyond that – this is about diplomacy an cementing relationships'. @BBCNews #TrumpUKVisit pic.twitter.com/TX9kTp6qza

Theresa May will be hoping that Trump gives some favourable and 'positive comments about Britain post-Brexit' and about future bi-lateral talks, which will 'work in her favour' at a time when she is in a weak position – @LeapfrogMark @BBCNews #TrumpUKVisit pic.twitter.com/l8tTfPzTMq

I hope it looked a little more glamorous on @BBCNews. Thoroughly enjoyed my stint talking about @realDonaldTrump with @annita_mcveigh today. Thanks @NickJBBC for thinking of me. pic.twitter.com/75lzptBvVm