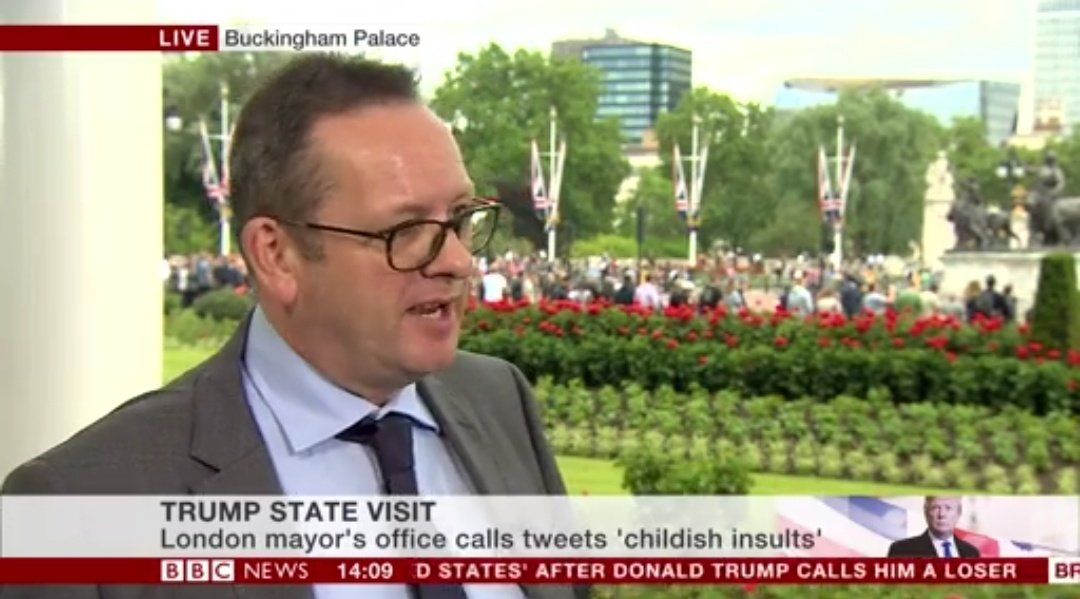 Associate Professor Mark Shanahan has been all over the media today talking President Trump’s first state visit to the UK.

President Donald Trump and First Lady Melania touched down in London on Air Force One this morning (Monday 3rd June) for his three-day state visit to the UK. This is the President’s first state visit to the UK, with his trip last year being a working visit. In his three days in the country, Trump will be a guest of Queen Elizabeth II at Buckingham Palace, have an official meeting with Prime Minister Theresa May at Downing Street, and attend a ceremony in Portsmouth to mark the 75th anniversary of the D-Day landings.

Mark Shanahan was outside Buckingham Palace in the afternoon talking to BBC News and BBC World News and giving his insights into Trump’s state visit. Later in the day he also discussed the visit on BBC Radio Berkshire and on France 24 International news. He argued that the political side of this visit is very much second fiddle. The pomp and circumstance that Trump loves and that he has received today is perhaps most important on Trump’s agenda; the optics of the First Family with the Royal Family will play really well with middle America ahead of his presidential campaign next year. Tomorrow is the political day of Trump’s visit, although according to Mark, this is perhaps the part that has the least value to both sides – Theresa May is a lame duck PM and Trump is not somebody that does ‘deep’ talks, so we shouldn’t expect anything more than a few tweets coming out of those meetings from Trump’s side!

Mark also discussed Wednesday’s D-Day anniversary ceremony, warning that many people might not consider that President Trump, a man who has never been in uniform and who ducked out of the Vietnam war because of heel spurs, has much of a right to be there. He also talked of the President’s unusual interference in UK domestic politics, with his recent tweet criticising the Mayor of London and his involvement in the new leadership campaign, wanting someone in No.10 who will make his ‘America First’ trade policy easy.

Who wouldn't want to be a fly on the wall in tomorrows #Trump/#May meeting tomorrow? The President's meeting with the "lame duck Prime Minister…he doesn't like 'losers' but he does like to be associated with power" @LeapfrogMark on @BBCNews pic.twitter.com/FOFl4oPDDS

Will it bother #Trump that he's not getting to address the joint houses of parliament? As @LeapfrogMark says, yes probably, especially as Obama got one. "But then again, a Donald Trump speech is probably not something we would all sit up for" pic.twitter.com/xO3QRb1Yo5

Pretty much 45 mins on @BBCWorld with @LucyHockingsBBC. Coveted everything from the #SpecialRelationship to fashion….certainly stretching my expertise! Missed my @SkyNews slot though. Oh well. Radio and @FRANCE24 later, and more tomorrow. pic.twitter.com/RC8RyAcvm1

On The Mall near #ClarenceHouse where @POTUS just arrived. The crowds (nearly all tourists) are nearly one deep. Not quite the adulation @realDonaldTrump may have hoped for. A few jeers; isolated cheers. But much of what #London does very well: mass indifference. #TrumpUKVisit pic.twitter.com/qVdAsa1tQE