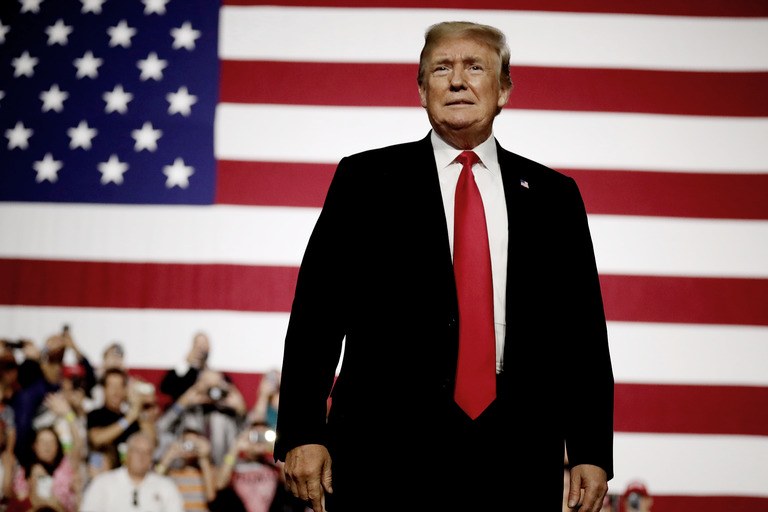 by Mark Shanahan, originally published on LSE US Centre

It’s all about The Donald. It always is. President Trump may not actually be running in the US Midterm elections on November 6, but in this strangest of ages, with a very ordinary presidency being delivered with extraordinary rancor, the name that is not on the ballot continues to dominate all the pre-election headlines.

About three hours after he was declared the winner of the 2016 Presidential Election, I was asked my opinion of him on the BBC. At the time I said he would be gone long before his four-year term was up. Rashly, I stated he might even be gone before the Midterms. That hasn’t happened. But he will go. Trump will exit the stage at a time of his choosing. That time will be when the gig no longer pays a hefty dividend. And with a divided government likely, the Midterm results could well define the timing of his departure.

A few months ago, I might well have predicted a Trump departure in the immediate wake of the upcoming Elections. Across America, a blue wave appeared to be building set to sweep the GOP from legislative power. Today, the forecast is 84 per cent likelihood that the Democrats will take the House of Representatives.  However, and in part because the races are in the wrong places, the chances of the Senate turning blue are a shade over 20 per cent. Many of the US Senate seats in the 2018 race are already held by Democrats, and there’s certainly a chance that the Republicans could actually gain a seat or two if the Huckster-in-chief manages to continue to rally Tribe Trump in the wake of the Kavanaugh Supreme Court confirmation. That delivered a win for conservatives and a galvanising force to drive blue collar white men to the polling booths again. 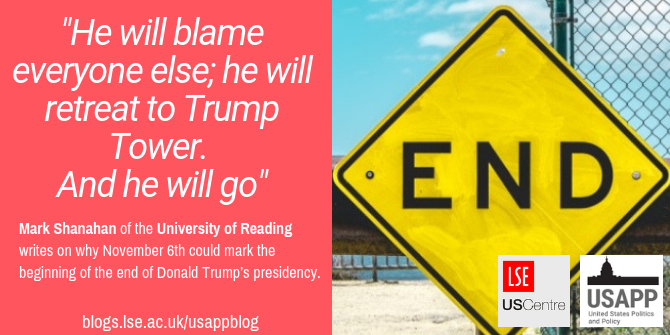 Trump has remained in campaign mode throughout his time in 1600 Pennsylvania Avenue. Building on the strategy of leading the daily news cycle early through his incessant and often intemperate early morning tweeting, and then appearing at rallies in front of non-questioning Trumpsters (buoyed, allegedly by staffers and actors) he has sucked the oxygen of publicity away from candidates on both sides of the political divide on all but the most local issues. Whether he’s lauding a politician for body-slamming a Guardian journalist, or building the fear of ‘other’ as he threatens Mexico over its handling of migrant caravans, he has ensured his face and name are the leads across the media. This election is less about legislative change at State and national level, and far more the first round of voting in ‘Mr America’, the latest Trump beauty pageant.

Trump’s presidency is all about the ratings. Not so much his approval ratings which have been woeful since day one, but the sheer amount of coverage he can garner. Elected in part through being the best-known brand in the race (thanks to 15-years of weekly exposure in The Apprentice and Celebrity Apprentice) his tactic has been merely to deliver on a series of campaign promises that run from the straight-forward standard Republicanism of cutting taxes, to the populist bellicosity of boosting the Second Amendment and building a border wall. Simple messages that connect – even though the ‘solutions’ are anything but simple. With the House, the Senate and the majority of States in the red zone, it has been a tick on taxes, ticks on reducing immigration and the biggest ticks of all in appointing not one, but two conservative Supreme Court justices. Reaping the wind of an improving economy and managing to not yet start a major war have played well with the base at home and in the run-up to November 6, Trump seems on a roll. He has been happily endorsing Trump-lite candidates and if the GOP pushback halts the blue wave, he will claim all the success as his own.

But what if the Blue wave does breach the Red Zone? If the Democrats were to take both the House and Senate, the Trump train would likely crash into the buffers at speed. Stymied by divided government, Trump would be impotent and exposed. Special Prosecutor Robert Mueller’s circling would become ever-more shark-like and, boosted by Congressional backing; we would soon see how many members of the Trump inner circle POTUS would throw to the wolves to save his own skin.

Much more likely is that the House will turn blue with a two-year red reprieve at Senate level. Trump could fight on in 2020, but we would then be far more likely to see the Democrats take the Upper House – even with their ongoing absence of policy, strategy and emerging nationally recognized figures (the old-guard of Warren/Pelosi/Sanders aside – they’re not the future).

Does Trump want to continue under a divided legislature where the threat of impeachment will only grow; where at best we’ll witness legislative paralysis and at worst a roll-back on his tax reforms and where he’ll have reduced protection from whatever Mueller might have on him?

In the short-term, any GOP Midterm failure will sit on the steps of the Capitol and outside a slew of governor’s mansions.  Trump, who has campaigned hard not in battle grounds, but in deep red states, may well claim to have saved the Senate for the GOP. But the likely reversal in the House may well come to be a slow death by a thousand cuts.

Trump does not like losing. Trump has no patience. Trump needs to have bragging ammunition. Two years of reinvigorated opposition. Two years of Congressional push-back and two years of having to swim hard to stay afloat will not play well in what he probably truly believes to be the greatest presidency ever. He will cause a fuss. He will blame everyone else; he will retreat to Trump Tower. And he will go. Quickly and with fireworks. American politics will be changed forever. November 6 could be the tipping point.