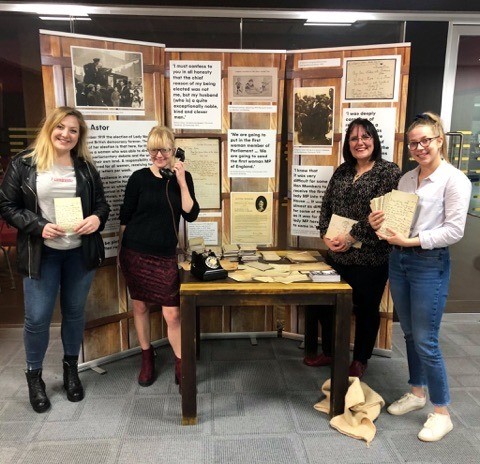 On 28 November, two weeks ahead of the General Election, a group of History MA students will witness the unveiling of the first public statue to a British female MP – Nancy Astor – a hundred years to the day since Nancy won the Plymouth bi-election with more votes than the other candidates combined. Here Molly Edwards, Bronwyn Jacobs, Rachel Newton and Abbie Tibbott remind us why it’s important to exercise our right to vote.

Why should you vote in this election?

Because you can and because the right to vote was hard won as we have seen though our research but also through our engagement with the Astor100 project, celebrating a century of women in Parliament.

Women won the right to vote thanks to the suffrage campaign which was a politically driven movement. Militant acts of arson, and hunger strike were used to gain Parliament’s attention. In 1918 the Representation of the People Act granted the vote to some women over 30 and working class men over 21. Only in 1928 did women gain voting rights on the same terms as men. But political equality has been a struggle for decades; women weren’t granted access to the House of Lords until 1958 although daughters still do not have the right to inherit hereditary titles.

The Astor 100 Project, managed by Dr Jacqui Turner and our team of postgraduate students from the History Department here at the University of Reading, is celebrating the election of Britain’s first sitting female MP: Nancy Astor. This year marks the one hundredth anniversary of her entry into parliament, leaving a fascinating legacy for women today.

So who was Nancy Astor?

Somewhat surprisingly Nancy was an American. Her husband Waldorf Astor was the sitting MP for Plymouth Sutton but following his elevation to the House of Lords, Nancy was persuaded to stand for the seat. Plymouth Sutton was a constituency that she was very familiar with and the electorate knew her very well.  On the 28th November 1919 she won her seat by more votes than her opposition combined; making her the first woman to take her seat in the House of Commons. Nancy was a pioneer and her election changed British democracy forever. Here, for the first time, a woman was able to directly influence the parliamentary debate and the writing of the laws of their own land.

Nancy was the only female MP for two years and faced a barrage of misogyny from the majority of male MPs who did not want her there. Nancy received 2-3000 letters per week from all over the world highlighting that she represented all women, not just her constituency. She paved the way for female MPs to join her, and when they arrived in the Houses of Commons, Nancy worked closely with them, across party divisions, predominantly supporting legislation surrounding the needs of women and children until she retired in 1945.

Importance of voting for a better, balanced world

Our work as part of this project has highlighted to us the importance of female representation in parliament in creating a better balanced world, but even more importantly, it demonstrates how important it is for everyone to be able to exercise their right to take part in the democratic process, and that’s where you come in!

More details on eligibility, registering, and how to vote in person can be found here: https://www.gov.uk/register-to-vote

Who you vote for is your choice, the only person that will see your ballot paper is you!

Whether this is your first election or not, going to the polling station or deciding who to vote for can be a daunting experience. As students ourselves, we’ve seen firsthand the struggle that men and women faced to be granted the vote and to be elected so that their voices would be heard in Parliament. So we urge you to make the most out of the information available to you, to enable you to make an informed decision about the future of our country’s government. Information about party manifestos, projects, promises and candidates can be found online with a simple google search. News websites will keep you informed of the progress of campaigning parties and you may even receive information through the post. Don’t let this overwhelm you!

Being able to cast a vote at a general election is an important way that you can contribute to changes in society. We as a nation hold the power to determine who represents us, what they stand for, and how they bring about change. We are under no illusion that politics is perfect, but as students, it is vital to be aware of how we are affected by governmental decisions. Whatever your preference on polling day, exercising your right to vote helps make the mission of those that campaigned for equal franchise worthwhile, continuing their legacy.

As part of the Astor 100 Project we will remember Nancy as we cast our votes on the 12th December.