GWR named one of its new Intercity Express Trains the ‘Nancy Astor’ at a ceremony at Paddington Station, Platform 8,at 7am on 28 November exactly 100 years since the by-election result announcing her being elected.

The inaugural journey was a special service carrying guests to Plymouth in time for the unveiling of a bronze statue of Nancy Astor, the first female to take her seat in Parliament. https://www.gwr.com/about-us/media-centre/news/2019/november/gwr-names-intercity-express-train-after-first-woman-to-take-her-seat-in-the-house-of-commons

Astor was nominated as part of GWR’s search for 100 Great Westerners.  Watch the naming ceremony:

“I know how challenging it can be to be one of the few women in a male-dominated environment. It requires resilience, determination and hard work to have your voice heard… I can’t begin to even imagine how much more challenging that would have been in 1919. But Nancy has shown that where one woman goes, many can follow. 100 years on there is still much to do to achieve full gender equality. But I am proud that GWR are providing, quite literally, a moving recognition for a woman who went first, who broke down barriers and allowed other women to follow.”

Dr Jacqui Turner, historical advisor to the campaign from the University of Reading, leading the Astor 100 programme, said:

“The election of Nancy Astor changed British democracy forever. For the first time, a woman was able to directly influence the parliamentary debate and the writing of the laws of her own land. A responsibility she willingly shouldered for all women…Today, she continues to make history and we hope the train renaming, statue unveiling and other activities involved in the Astor 100 project will inspire further changes in politics, where equality is yet to be achieved a century after her election.”

“this Nancy Astor train and her statue represent links between time and space, emphasising that equality is not here yet and there is a great deal still to be done.”

“I don’t know our grandmother would ever have thought a train would be named after her. But we feel she would be both flattered and appreciative and her father absolutely delighted.”

The train was managed by an all-female crew: 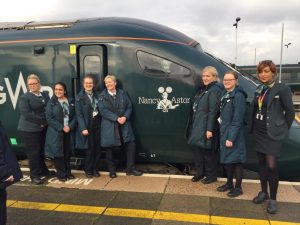 Postgraduate students from the University of Reading worked with GWR to deliver a historical narrative for the passengers. Back onboard, they were able to read and handle copies of letters and personal documents from the Astor archive. 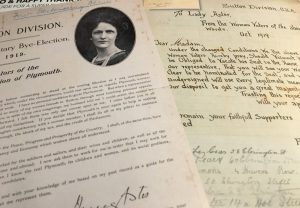 You can hear the student’s biographical tannoy announcements . 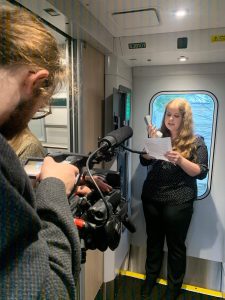 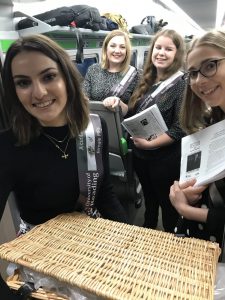 Our sincere thanks to Jane Jones and her team at GWR.