It’s now less than six weeks until the moment we’ll install a bronze statue of Nancy Astor on Plymouth Hoe to commemorate the first female MP to take her seat in parliament and the centenary of her historic election victory.

The eleventh of October was another significant date for us, as the bronze for the statue was poured. It also marked four hundred days since we started the fundraising campaign.

it’s been incredible to watch as the memorial to a parliamentary pioneer takes shape. As the national programme lead for #Astor100 and the historical consultant on the Nancy Astor Statue Committee, for me, the ‘bronze pour’ at the Bronze Age foundry in Limehouse this month was an important milestone – the point of no return – we now have a statue that will represent Nancy Astor and her legacy. 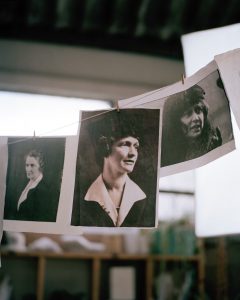 Who was Nancy Astor?

Nancy Astor made history when she took her seat in parliament in November, 1919. American-born Nancy née Langhorne, succeeded her husband Waldorf as Conservative MP for Plymouth Sutton in 1919, becoming the first woman to sit in the House of Commons. She continued to represent the Plymouth Sutton constituency until her retirement in 1945. The election of Nancy Astor as MP for Plymouth Sutton changed British democracy forever. For the first time, here was a woman who was able to directly influence the parliamentary debate and the writing of the laws of their own land.

A century on and following a £125,000 crowdfunding project chaired by the incredible Alexis Bowater, Plymouth Women in Business CIC and myself, this historic statue will be erected outside Nancy’s constituency home in Plymouth. It was designed and sculpted by Hayley Gibbs and the bronze statue was “poured” at the Bronze Age casting foundry in Limehouse, London on 11th October 2019.

Having been part of the commissioning process and an observer of the creative process from start to finish, for me the pour was the culmination of 4 years’ work and generated an unusually emotional reaction I didn’t quite expect. It was wonderful to encounter the partial upper part of the statue in bronze  – for the first time the Nancy Astor from our archives at Special Collections was looking back at me.

We have trawled archives, checked periodisation and worked with the Astor grandchildren to get the right ‘look and feel’ for the statue while at the same time being careful to deliver the right message. It has been a long but both exciting and rewarding process. Historical consultancy is never easy – it is a balancing act between historical accuracy, the creative process and ensuring an empathetic modern legacy.

The creative process and the ’bronze pour’ 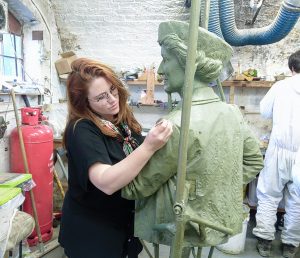 The first one and a half times sized statue of Nancy was sculpted in Hayley’s South London studio. The texturing has been created from the fingerprints of statue supporters and donors using casts of their hands made at workshops held by Hayley and her team. The clay model was then cast in silicon to make the first mould. A full wax model then allowed Hayley to make finer detailed adjustments before the statue was cast in bronze.

We were lucky to see the bronze pour for the bottom part of the statue in the company of the UK and US media. The sound, the smell and the heat generated during the bronze pour was elemental – a process that has changed very little since the Victorian period. 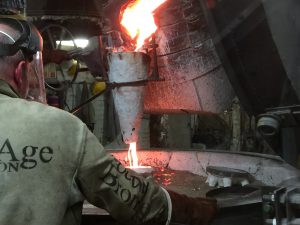 Now cast, the statue will be unveiled on Plymouth Hoe, outside Elliott Terrace on 28th November 2019. Watch this space for more news and events.

More images from the bronze pour can be found at Getty https://www.gettyimages.co.uk/photos/nancy-astor-bronze?family=editorial&phrase=nancy%20astor%20bronze&sort=mostpopular