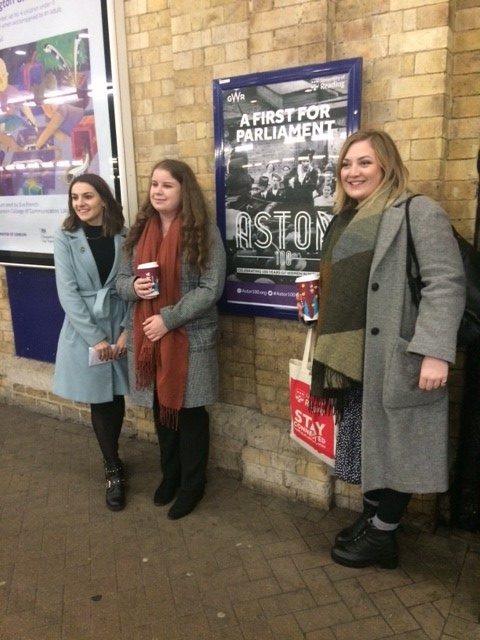 On 28 November 1919, Nancy Astor was elected to Parliament, becoming the first female MP to take her seat. A century on, a train named in her honour took VIP passengers to Nancy’s former Plymouth constituency where a new statue was unveiled. Here we tell the story of the day’s events in tweets and audio clips from the historic journey.

The election of Nancy Astor changed British democracy for ever. For the first time, a woman who was able to directly influence the parliamentary debate and the writing of the laws of her own land – a responsibility Nancy willingly shouldered for all women.

Her courage and resilience in standing alone for almost two years in a hostile House established a platform on which women continue to build today. Nancy’s arrival in Parliament ushered in a new type of politician, a public woman, a new perspective and a reminder that there was a female electorate who increasingly demanded that their voice be heard.

Reading historian Dr Jacqui Turner has spent the past four years curating and leading #Astor100 – a major series of academic and public engagements taking place during 2019 and on into 2020. The programme is underpinned with an online exhibition of Nancy’s political career and legacy using materials from the Astor archive which is held within the University of Reading’s special collections. #Astor100 goes beyond Nancy Astor to be a wider celebration of what Nancy represented and the avenues she pioneered for women who followed.

The anniversary celebrations began in the early hours of the morning of 28 November, with the naming of a new Great Western Railway train in Nancy’s honour at London Paddington.

And we were on board with @Jacqui1918, @MelanieKhuddro, and @UniRdg_Research, on the way to unveil the @ladyastorstatue for #Astor100 ❤️ https://t.co/lqOiiuV6ZV

As was Dr Jacqui Turner, who spoke at the train unveiling ceremony:

Meanwhile, in Reading, where the Astor archive is held at the University’s special collections, Nancy appeared on a huge digital billboard outside the station.

What a lovely surprise to see this super-sized @LadyAstor100 advert outside Reading station this am! pic.twitter.com/PrLCnFDMk7

Astor historian and Jacqui’s PhD student Melanie Khuddro hopped off the train at Reading to give media interviews:

Lovely to meet @HelenPankhurst who gave a speech at Paddington for the naming of the Nancy Astor train. Here she is with our postgraduate history student @Bronwyn14_ at Reading station 🚉 #Astor100 pic.twitter.com/dsjOt5LhtZ

Back onboard, passengers were able to read and handle copies of letters and personal documents from the Astor archive.

Pieces from the Nancy Astor Archive being spread throughout the train.

I work with the originals all the time at work @UniRdg_SpecColl and seeing them being consulted and marvelled over en masse is a real joy! #Astor100 pic.twitter.com/EofoRammXy

And the four Reading MA History students on board told the story of Nancy’s life over the train’s Tannoy system as the train headed west.

After the train arrived in Plymouth, passengers were taken by bus to the statue outside Nancy’s former home at 3, Elliot Terrace on Plymouth Hoe.

The Nancy Astor Express has arrived in Plymouth, Nancy Astor’s constituency for over 20 years.

Fabulous speeches at the unveiling of the @ladyastorstatue on the Hoe. #astor100 pic.twitter.com/CCCYm2u5kE

What a fantastic afternoon attending the unveiling of the @ladyastorstatue today. Commemorating 100 years of women in parliament. #Astor100 pic.twitter.com/3I4acitQPf

And there she is!

Nancy Astor commemorated in front of her Plymouth home.#Astor100 pic.twitter.com/2HQHEsbMuS

The Reading MA students took the opportunity for a selfie with the former Prime Minister:

Unbelievable opportunity for all of us today. Incredibly lucky to meet @theresa_may today after the statue has been unveiled. What a day! #Astor100@UniofReading @LadyAstor100 @ladyastorstatue pic.twitter.com/zCsvp8ST75

The unveiling of the statue by Theresa May caused controversy in some quarters, particularly in the current pre-election climate. Jacqui Turner says:

“It is inevitable that we look to the past to find synergies and echoes of the challenges and achievements that are evidenced today. Our present and the future is inevitably shaped by the past and to some extent those who inhabited it. Being the first is never easy and as historical totems they rarely sit comfortably on the pedestal that we force them on to.”

Visit the Astor100 FAQs page for more context about Nancy Astor’s views and the controversy that has sometimes surrounded her.