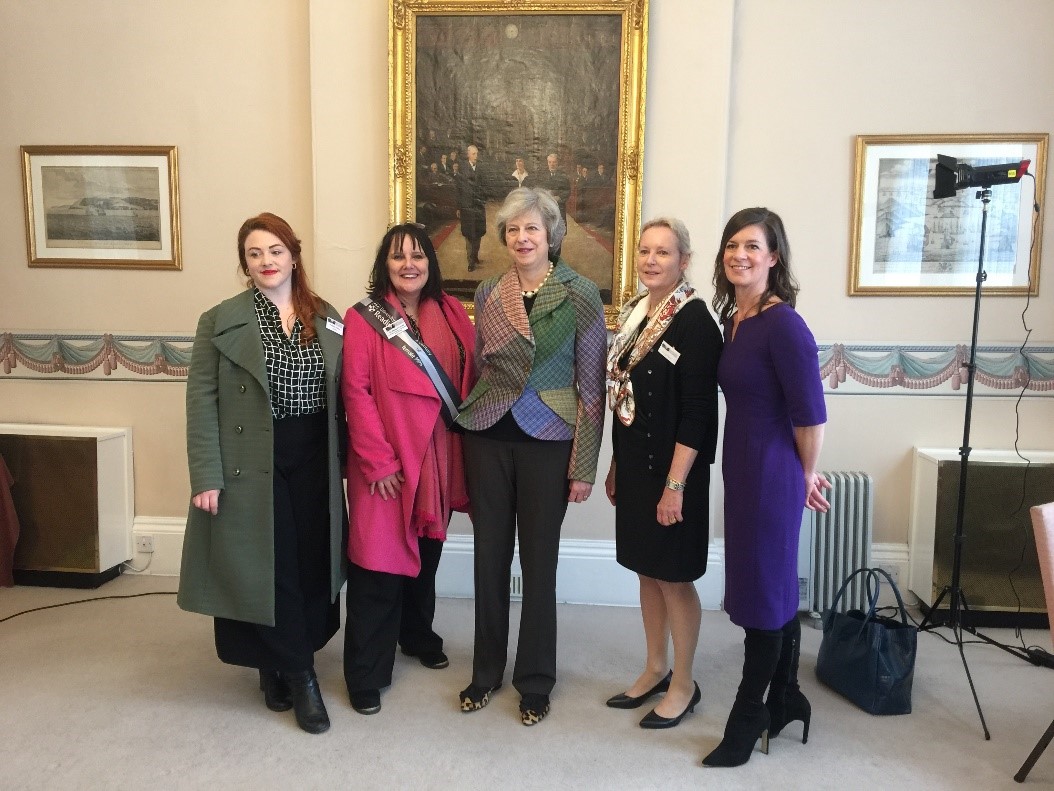 I have been privileged to be the curator of Astor100, a major bipartisan series of academic and public engagements that have taken place during 2019 and Spring 2020. The programme has been underpinned by a digital humanities project ‘An Unconventional MP’: The political career of Nancy Astor in 50 documents’, an online exhibition illustrating Nancy Astor’s political career and her legacy. But Astor100 goes beyond the commemoration of Nancy Astor as an individual, it is the memorisation of the achievements of one individual, what she represented and the avenues she pioneered for women who followed. It also amplifies the demand for continued progress towards political equality – we are not there yet!

One of the major successes of Astor100 was undoubtedly the crowdfunding and unveiling of the Nancy Astor statue which became the media centrepiece for the programme. GWR renamed a train the Nancy Astor and with an all-female crew we made the inaugural journey to Plymouth delivering many of those who have supported Astor100 to Plymouth for the statue unveiling. But there were major events and installations with other organisations. We worked with Parliament and with current MPs highlighting and drawing parallels to the challenges that women still face today, including IWD 2019. At her country home Cliveden, we worked with the National Trust challenging the ways in which in which the Trust typically represents women – not just in a domestic setting but as pioneers in power and politics. We also worked with the Astor family, especially Emily Astor, who generously lent their time, support and resources.

Dr Jacqui Turner talks to Jacob Rees Mogg, The Leader of the House about Astor’s maiden speech and her legacy here https://twitter.com/CommonsLeader/status/1231843703741984768

📺 100 years ago today in the House of Commons, Nancy Astor became the first ever female Member of Parliament to give her maiden speech. pic.twitter.com/dTPHeHtqBM

But there have been some tough lessons learned for “doing” women’s parliamentary history in the public sphere along the way. Erecting a statue to a Conservative and Unionist party politician was very different from commissioning and unveiling a statue of a suffrage campaigner or a non-political woman. It was an honour and a privilege to speak at the unveiling of the statue of Nancy Astor in Plymouth on the 100th anniversary of her election to Parliament on 28th November and to be part of the celebration of the centenary commemorations of her maiden speech which she delivered on 24th February 1920.  The statue commission and event was a bipartisan affair, attended by senior women and men across the political spectrum. But we ran up against an issue that meant that the bipartisan support for women’s achievement and the message of gender equality was lost; it was swept away as the statue was caught up in the rhetoric of one of the most divisive general elections for many years and the Twittersphere exploded in righteous indignation. Commentators on the far left condemned the statue and Theresa May for unveiling it and Astor was roundly labelled a fascist, a Nazi sympathizer and notorious anti-Semite:

‘The Astor statue had been drafted into Britain’s 21st-century culture war. The outrage about it was a proxy, in part, for contemporary squabbles: May’s involvement nourished the perception, popular on the left, that the British press has a double standard when covering racism in politics. Allegations of institutional anti-Semitism have engulfed coverage of the Labour Party in recent years. (The party is currently under formal investigation by Britain’s equalities and human-rights watchdog.) Claims of racism in Conservative ranks, critics say, have attracted a lesser focus.’ (Jon Allsop, The Columbia Journalism Review, December 2019)

And it is here that I want to return to the Astor family, the subject of both the positive and negative comment was their grandmother, someone that they remembered well and with affection.

Where do we go from here?

How then do we move forward with women’s parliamentary history? More broadly, we have to get away from celebrating women consistently through the lens of centenaries. The media may make a beeline for centenaries but as a historical framework it is limiting. It is inevitable that we look to the past to find echoes of the challenges and achievements that we still see today. While the lines of continuity with the past are not always crystal clear they are there, our present and the future are inevitably shaped by the past and those who inhabited it no matter how imperfect. Thus Nancy Astor, both as an individual and her legacy, are important despite the fact that as people they rarely sit comfortably on the pedestals that we force them on to. Similarly, we cannot assume that all women are feminists and certainly this can be a problematic label for Conservative women but that does not make them and their contributions any less worthy of our attention. “Doing” women’s history must be a more nuanced affair than short span media attention and social media soundbites allow, we must return to the fundamentals of the education system and make women’s parliamentary history part of the mainstream narrative. Should we ask whether we still need women’s history as a category simply a history of Parliament? Centenaries are often apologies for why we are talking about women and that must change.

While Nancy embodies the challenges of women politicians between the Wars she also highlights many of the challenges that women in politics still face today. While great strides have been made, in our 24 hour a day, social media driven world issues may take a different format but they are the same.  Nancy Astor was the first step towards a better balanced political world but we also need to acknowledge and act on what she herself said – she ‘left the door open for others to follow’ and we must provide all women in politics with the support and protection that Nancy Astor needed to ‘keep her up’.

Sincere thanks to Jon Allsop whose article for The Columbia Journalism Review can be found here.