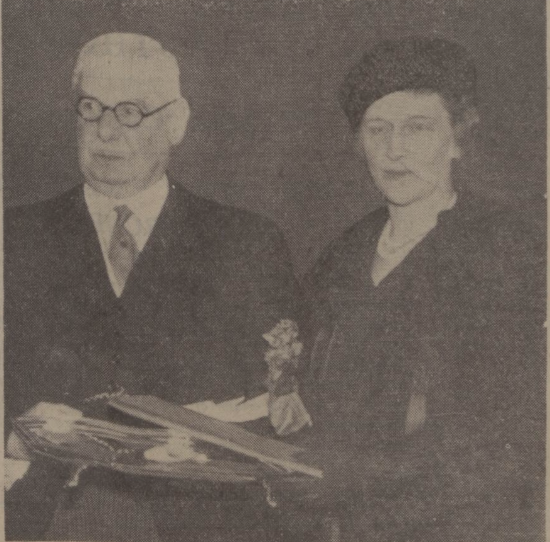 Nancy Astor’s election agent, Christopher George Briggs was one of a new breed of agents who established the National Society of Conservative Agents. Here,  Dr Kathryn Rix, Assistant Editor of the House of Commons, 1832-1945 project, explains Briggs’ role in Astor’s  successful campaign for the Plymouth by-election in 1919.

In January 1941 Nancy Astor was among the mourners at the funeral of Christopher George Briggs, who had served as her election agent in the seven contests she fought in her Plymouth Sutton constituency from 1919 onwards. Briggs had retired as Conservative agent for the division four and a half years earlier, an occasion marked by a testimonial to which nearly 1,000 people subscribed. Astor presented him with an album containing their names, together with a silver salver. He also received a cheque for £113.

Obituaries of Briggs noted his pioneering achievement as election agent to the first female MP to take her seat in Parliament. However, he had started working as a Conservative agent in a rather different political era, well before the extension of the parliamentary franchise to women and the prospect of women MPs. His career was typical of the new breed of professional agents who became increasingly significant in the wake of the major electoral reforms of 1883-5, making a full-time occupation out of the registration and electioneering activities which had previously been done on a part-time basis by solicitors. The Conservative agents formed their own professional organisation, the National Society of Conservative Agents (NSCA), in 1891. It held regular meetings at national and regional level, published a professional journal and set up a benevolent fund for agents. Those wishing to join the society could qualify either by taking its professional examination or through several years’ experience.

Briggs applied to join the NSCA in 1894 and was asked to take the examination. Having sat a three hour paper with 21 questions on registration, election law and ‘General Organisation, Knowledge and Efficiency in the Work of a Political Agent’, he was awarded his certificate as an Associate of the NSCA in June 1894. The examination aimed to prepare agents for all eventualities, with questions ranging from the day-to-day routine of party organisation – What would you consider the most successful method of organizing ward committees in a borough constituency, and how would you keep up the interest and enthusiasm of the workers from one election to another? – to dealing with the unexpected at an election: Assume that a riot takes place in one of the polling districts of a county constituency in the evening of the polling day, and that the ballot box and contents are burnt, what effect would this event have on the election return?

By the time he passed this examination, Briggs had several years of political work under his belt. From 1885 until 1891 he was second in command of the organisation at the central offices of the Leeds City Conservative Association. He acted as election agent in the Leeds West constituency at the 1892 and 1895 general elections. Although this was a safe Liberal seat, held by William Gladstone’s son, Herbert, Briggs’s efforts contributed towards a reduction in the Liberal majority in 1895.

For Briggs, as for many of his fellow professionals in the Liberal and Conservative parties, employment as an agent offered the opportunity for a higher salary and upward social mobility. He was born in 1863 in Halton, a village close to Leeds, where his father Alfred Spencer Briggs was a bricklayer (as was Briggs’s grandfather, George), and his mother Caroline was a dressmaker. Briggs’s father was listed on the 1871 census as a builder, suggesting an improvement in the family’s position, but he died in 1878, aged just 39. Briggs did not follow his father into the building trade; instead he became a pupil-teacher, a scheme which Gill Sutherland has described as ‘a limited little career ladder by which the working-class child could move to white-collar respectability’. By the time of his marriage in 1883 – to Mary Elizabeth Keighley, the daughter of a Leeds plumber – Briggs had become an assistant school master. His move into political work two years later provided the possibility of further advancement. While the average annual salary for an elementary school teacher in 1895 was £122, an agent could typically expect to earn between £150 and £200, with those at the upper end of the profession earning £300 or more.

In 1898 Briggs moved from Leeds to take up a new position as Conservative agent for Plymouth. Unlike solicitor agents, who tended to confine their political work to one constituency, the professional agents were a highly mobile group, transferring their knowledge and experience across the country. Briggs’s skills were clearly in demand, since in 1906 he was asked by the former Liberal Unionist MP J. C. Williams to become agent for the Truro division of Cornwall. This seat had been lost to the Liberals in the 1906 landslide, and the Liberal Unionists and Conservatives had formed a joint committee ‘to consolidate, extend, and improve the organisation of the division’, a task they entrusted to Briggs. Although the party did not regain the seat, they succeeded in cutting the Liberal majority, and in 1914 Briggs returned to his previous position as Conservative agent for Plymouth. In common with many fellow agents he undertook voluntary work during the First World War, serving as secretary to the Plymouth War Hospital Supply Depot, where he was presented to King George V and Queen Mary when they visited in 1915.

At the 1918 general election Briggs served as Waldorf Astor’s election agent for Plymouth Sutton, and performed the same role for Nancy Astor at the November 1919 by-election and all her subsequent contests. Alongside his efforts in maintaining the local party organisation and running Astor’s election campaigns, Briggs enjoyed some more light-hearted moments, being among those introduced to Charlie Chaplin when Nancy Astor hosted him at Plymouth in 1931. He trained other agents to follow in his footsteps, including his successor at Plymouth Sutton, Herbert Murray, and his own son George, who was appointed as agent for Totnes in 1906 and became agent for Penryn and Falmouth in 1911. Briggs’s experience meant that he was also in demand to assist at by-elections in other constituencies, particularly in the Western region.

When Briggs announced his impending retirement from political work in 1936 after more than half a century, the chairman of the Plymouth Sutton Conservatives praised his ‘many years of most faithful, skilled, and devoted service’ during which he had ‘built up an electoral organization of which he has every right to be proud, and one for which we have every right to be grateful’. Astor’s place in Parliament was underpinned by the efforts of this stalwart political organiser.

This post from Dr. Kathryn Rix, Assistant Editor of the House of Commons, 1832-1945 project at the History of Parliament Trust, traces the background of Nancy Astor’s election agent, C. G. Briggs, a long-serving member of the Conservative agents’ profession. For more on the professional agents, see her book Parties, agents and electoral culture in England, 1880-1910 (Boydell & Brewer, 2016).