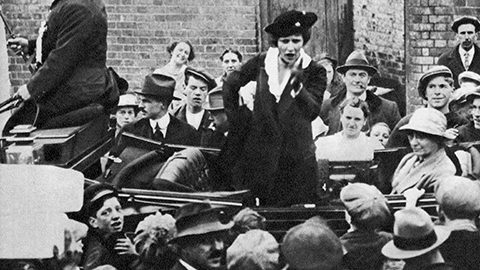 The History Department at University of Reading are embarking on a new blog series – historical Desert Island Discs. You can find the series via twitter @UniRdg_History or directly on the Reading History blog https://unireadinghistory.com/ We couldn’t resist doing our own Desert Island Discs for Nancy Astor. 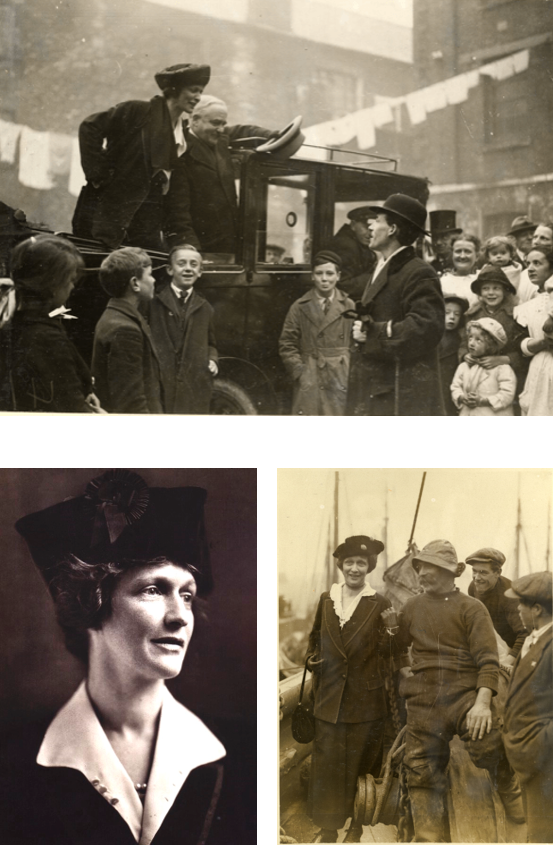 Cast away on our desert island (something that she would absolutely have hated) is Viscountess Nancy Astor, the first woman to take her seat in the British Parliament. Nancy succeeded her husband Waldorf Astor as Conservative MP for Plymouth Sutton in 1919, becoming the first woman to sit in the House of Commons. She continued to represent the Plymouth Sutton constituency until her retirement in 1945.

But less about the politics and more about the music:

Nancy was born and bred in Virginia. After a disastrous first marriage she set sail in 1904 to ‘do the English season’. A charming, witty and keen horsewoman she made a great impression. When asked if she was after a rich British husband she replied “if you knew the trouble I had getting rid of mine you would know I don’t want yours”!

‘They say you’re nothing but a party girl’

To many Nancy was a surprising and disappointing first woman in Parliament because she was known primarily as a society hostess who had supported her husband’s political career. She had never been an active feminist or part of the suffrage movement. No one expected family connections or elitism to secure the first seat for a woman. However, Astor always claimed that she was ‘as good a feminist as anyone’ and women turned to her in droves as she pursued legislation for women and children.

‘How do I feel this good sober?’

Nancy was voraciously teetotal and said ‘One reason I don’t drink is that I want to know when I am having a good time’. On 24 February 1920 Nancy gave her Maiden Speech on the vexed question of drink. It took some courage to stand alone in a belligerent Chamber of men and advocate for the continuance of wartime restrictions on drink but she did. Subsequently, she introduced the first Bill by a woman, the Intoxicating Liquor Bill in 1923, which remains the reason that we all have to wait until we are 18 to drink alcohol today.

‘Can you sharpen your tongue kid’

Nancy was famous or infamous for her wit and repartee. This was often on display in the House of Commons and on the hustings but her family didn’t escape either – she signed letters to her father, “Affectionately the battle Ax “and “though I’ve the tongue of a shrew, and many vices, I adore my cranky old Pa“.

‘Explain it to me again/ Though I know all about/ The words you’re spitting out/ The floor is yours without a doubt.’

Nancy was often rebuked for her audible commentaries on other MPs questions, responses and speeches on the floor of the House of Commons. Frequently, this was her annoyance at what we might call ‘man-splaining’. She found it difficult to listen to men pontificating at length on issues relating to women, hmmmmm.

Don’t Let Me Be Misunderstood (1965) The Animals

‘I’m just a soul whose intentions are good, Oh Lord please don’t let me be misunderstood’
Nancy wasn’t without her own unpalatable views, but some of these charges against her require more nuance than this blog will allow though others have become legends that is difficult to shake. Many biographical accounts of Nancy focus on her personal character flaws though these are most often highly gendered and in relation to her deficiencies as a wife and mother – all written by men by the way!

The alleged ‘Cliveden Set’ was certainly the ‘in’ crowd; allegedly they were a group of influential people who supported appeasement and used their wealth, connections and ownership of newspapers to subvert government policy. This was a claim which Nancy called a ‘terrible lie’ and the idea of Cliveden as the centre of an upper class conspiracy to impose appeasement has been discredited.

‘Lets give them full air parity, And treat the rats with charity’

Initially Nancy supported appeasement, as did many people at that time, especially the upper classes who saw fascism as the only real alternative to the threat of communism, she even stated this in her election address. However, she was whole-hearted in her support for the war effort, especially within her naval constituency of Plymouth Sutton. Nancy Astor and Ribbentrop got on so badly that she ended up on a Nazi list of people to be arrested in the event of a German invasion. By the latter stages of the War all 4 of her sons were abroad on active duty.

Nancy has been given The Complete Works of Shakespeare and the Bible though I am not altogether convinced that she would have voraciously read the former. Her choice of book? As a committed Christian Scientist it would have to be Science and Health with Key to the Scriptures by Mary Baker Eddy – keeping body and soul intact!

Luxury item: Hat and gloves. Nancy was never knowingly seen without either! Would also remind her of all of those arguments in Parliament over hats!  Or maybe her statue … standing outside her constituency home on beautiful Plymouth Hoe looking out towards Virginia.