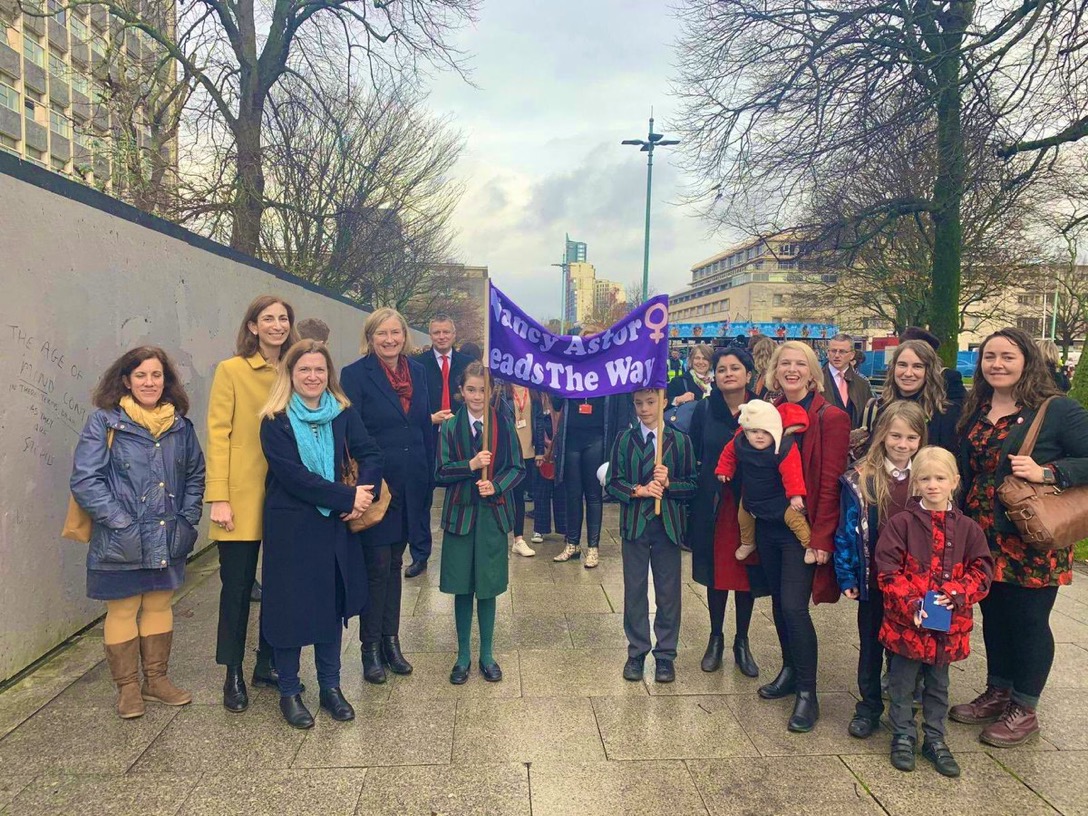 Astor 100 has been an incredible success. My gender often makes me feel uneasy about writing about Nancy Astor but as the MP for Plymouth Sutton and Devonport, near enough the same constituency Nancy was elected to serve 100 years ago, she and I have a special connection. Nancy Astor and I would disagree on a great many things. Her politics and perspectives were not the same as mine, but her passion for Plymouth is a bond we both share. As a Labour MP I got some odd looks for proposing a statue to the first woman to take her seat, a Conservative MP no less.

I did so proudly not because I am a devout follower of her politics or her views but because my city had overlooked her contribution for too long. When we ignore the stories of those who have shaped who we are today, for better or for worse, we miss out a part of who we are and why we are. Plymouth is a master at this. We hide our light under a bushel and hide the bushel so often that Nancy Astor’s achievements being buried was just accepted as the way of things.

It’s not an uncommon story. Women are often airbrushed out of history. Their achievements overlooked and their triumphs qualified or attributed to men. It is why I wanted to make sure that in Plymouth, the home of Nancy Astor’s political story, the centenary of her election was celebrated, noted and marked with a statue to her.

The story of the Nancy Astor Statue is not my story. It is the story of many fabulous people led by the indomitable Alexis Bowater, former MP Linda Gilroy and many others who poured their hearts and souls into this project. Their hard work has given Plymouth a truly remarkable gift: it has helped us rediscover our history and face the future prouder of where we have come from.

The statue of Nancy Astor stands proudly on Plymouth Hoe just a few metres from her home on Elliot Terrace with its grand sea views that she donated to the city after she stood down as an MP in 1945. The bronze sculpture by Hayley Gibbs serves not only as a reminder of Nancy’s achievements but also of the city of Plymouth in electing a woman to serve them in Parliament. The statue is set back from the tarmac of the promenade and so popular has it become that the City Council is having to lay a new path to help people avoid the mud bath that thousands of visitors have created on their pilgrimage to the statue. This, I might add, is a good problem to have.

It is not just people with first-hand memories of Nancy who visit. It’s the energy of young girls in particular seeing someone like themselves heralded and celebrated that is most powerful. Seeing young girls now talk of Nancy fills me with joy. Not because I want them to emulate her politics, far from it, but because Nancy literally broke the glass ceiling. Her advantages in life may have assisted her, but to qualify her achievement in 1919 on being the first woman to take her seat rather serves the point as to why there aren’t more statues of women.

In a response to a Parliamentary Question I asked about how many statues of women compared to men, a junior Minister replied: that information is not kept centrally. But it should be. We should ask why there are hardly any statues of great female pioneers who are not royal, mythical or fictional. Why are there countless statues of men but few of Britain’s great female scientists, political leaders and trade unionists? We still have a long way to go.

Vote100 and Astor100 have been national endeavours; Moments of celebration and reflection that challenge us today just as much as it does recount the progress of the past. What we must make sure is that the curiosity and appetite to tell the hidden stories of women’s roles in politics is sustained, not just by women but by men too. We need the change that these anniversaries have brought to be lasting and as profound as the original moment they remember because we are not yet at a 50/50 Parliament and certainly not anywhere near parity in representation in local government.

Nancy Astor’s election was a century ago. Let’s continue to strive for equality in all things and with that tell the stories of those people who were the pioneers. Tell the good bits and the bad bits but, whatever you do, tell the stories and give these women back their rightful place in our national story.

Luke Pollard is the Labour and Co-operative MP for Plymouth Sutton and Devonport. He founded the Nancy Astor Statue Appeal in 2018.