This month we are celebrating the 100-year mark of Nancy Astor delivering her maiden speech to the House of Commons.

A little over two months after becoming the first women to take her seat in British Parliament, Astor gave her first address to her new peers on a topic she passionately endorsed during her career: drink restrictions.

As a contentious question – and one that she continuously described a ‘vexatious’ – her pursuit in encouraging sobriety was met with a wave hostility both in and out of Parliament.

Nevertheless, Astor’s commitment to the issue of drink eventually awarded her with a second ‘first’ title in British history. In 1923 she became the first woman to introduce a Private Members Bill, which passed as the Intoxicating Liquor (Sale to Persons under Eighteen) Act 1923. The Act is still fundamentally in function in the UK today.

Naturally, her address opened acknowledging her already controversial position as a pioneer, reasoning that at the start of any venturesome opportunity, a cautious voice would say “Do not do it; it has never been tried before. Stay at home, cruising in home waters.” 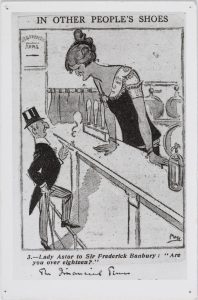 Promptly, she refocused her attention to the community and, specifically, the benefits various restrictions bring to those communities as a prelude to discussing what she considered the most beneficial: drink restrictions.

Astor consistently reiterated the impact on women and children in communities where excessive alcohol consumption was accessible.

“I am thinking of the women and children. I am not so tremendously excited about what you call the freedom of the men. The men will get their freedom. I do not want to rob them of anything that is good. I only want to ask them to consider others.”

Her closing statements unpinned how the theme of drink was one which she must have spoken out on, particularly for the sake of the women who were unable to speak.

With the prohibition movement rife in the United States at this time, Astor’s American upbringing was yet another factor brought under scrutiny by her opponents. The press in particular used the term ‘pussyfoot’ in critical publications to circulate the notion that Astor was linked to American temperance. 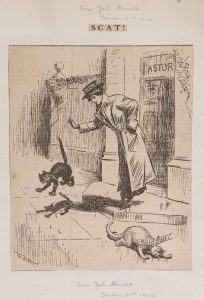 Regardless, Astor often rebutted claims, arguing that she was condoning moderation and did not wish to impede on individual liberties.

“I admit that the country is not ripe for, and does not now want, prohibition. The honourable member is perfectly right there. I am not pressing for prohibition. I am far too intelligent for that. Frankly, I say that I believe that men will get nearer the paradise they seek if they try to get it through a greater inspiration than drink.”

Her devotion to the Christian Science Church also played a part in her commitment to drink restrictions.

The link between Astor’s political endorsements and her faith cannot be understated. Christian Science philosophies on the moral position of drinking are well known, but perhaps what is less well-known is how accessible its theology was for women during the time Astor.

The theme of protecting women, children and the community were encompassed in Astor’s first formal speech to the House of Commons, and were sentiments that echoed throughout her 26-year long career as the sitting MP for Plymouth Sutton.