We are delighted to welcome one of own alumni Lisa Berry-Waite as a guest blogger this week. Lisa is now a studying for a PhD at the University of Exeter, her research focuses on the British parliamentary election campaigns of female candidates, 1918-1931. Here she discusses ‘The Unpublished Autobiography of Nancy Astor’.

‘I loved the Plymouth life, and I loved and understood the people there.’

In November 1919, Nancy Astor won a Plymouth Sutton by-election, becoming the first woman MP to take her seat in the House of Commons. Prior to her election success, Astor enthusiastically supported her husband’s political work (Waldorf Astor), who was MP for Plymouth Sutton from 1910 to 1919. Although she initially stood as a ‘warming pan’ for Waldorf, after he was elevated to the House of Lords following the death of his father, the first Viscount Astor, Astor remained MP for Plymouth Sutton from 1919 to 1945.

Amongst the 374 boxes that make up the Nancy Astor papers, held at the University of Reading Special Collections, is Astor’s unpublished autobiography. Although Astor never finished it, her autobiography is a fascinating source that reveals much about the remarkable life of the first female MP to take her seat. From her childhood in Virginia, to her political career and vibrant social life, this is a vital source that has rarely been studied by historians.

‘The moment I got there I had the strangest feeling of having come home. It was not like a new place to me. I felt that here was where I belonged.’

Astor’s dedication and connection to Plymouth and its constituents is obvious throughout her autobiography. Astor claimed to feel a spiritual connection with Plymouth and saw the city as her Virginian home in England.

Through supporting Waldorf’s political career, Astor soon became an established figure in Plymouth and increasingly knowledgeable on constituency affairs. Astor was not merely, as she put it, ‘The Candidate’s Wife!’ She declared:

‘I knew Plymouth; I knew its narrow streets and alleys; I knew its mothers and infants…I made it my business to know the people; to find out what they were thinking; to discuss points with them, and if need be, to argue with them. I was not a mere passive supporter of my husband.’

By the time she stood for election in 1919, she was an experienced campaigner and captivating public speaker. Known for her charm and Virginian wit, Astor dealt with hecklers with ease. She explained ‘when I stood for my first election in Plymouth I was not lacking in electioneering I had gained it among the people I loved so well.’ Her commitment to Plymouth continued throughout her life; as she stated in a 1956 BBC interview ‘I stuck to Plymouth, Plymouth stuck to me’.

Throughout the Astor100 programme and centenary celebrations, we have seen the city of Plymouth come together to celebrate Astor’s achievements and legacy, most notably through the support of Astor’s statue erected on Plymouth Hoe.

A woman in the public eye

‘No one should enter public life unless he or she has a thick skin.’

Astor’s thoughts on being a woman in the public eye have always stood out to me; the political establishment and press considered her an outsider, both as an American and a woman. Navigating public life as Britain’s first female MP was not easy. Every aspect of her life was scrutinized in the British and American press, so much so that at one point ‘I had to ask the Press to leave me alone. I felt it was unfair to my sex and unfair to my constituency to be the subject of what was only idle chatter.’

Astor’s appearance and clothing choices made regular headlines; she insisted on wearing simple clothing as she wanted her politics to be discussed, and not her outfits. Male MPs were shocked at Astor’s election success – reflecting on this, Astor wrote ‘I know that Parliament hasn’t altogether relished my presence. It has never quite got over the shock of finding a woman installed inside that most exclusive of clubs. I hope I may be able in time to live that prejudice down’.

Women MPs today continue to be scrutinised on their appearance – who can forget the Daily Mail’s headline in 2017 which read ‘Never mind Brexit, who won Legs-it!’ when running a story on the Brexit discussions between Theresa May and Nicola Sturgeon. Furthermore, with the rise of social media platforms, women MPs are experiencing worrying levels of online abuse and intimidation.

‘I did not seek office. I knew that it would have been a straight-jacket for me. The Conservative Party showed great toleration towards me but if I had taken office it would have tried their patience too much.’

Although a Conservative MP, Astor was fiercely independent and possessed liberal views, particularly on matters of social reform. Astor’s commitment to social reform was not popular amongst her party, and she was often politically closer to Labour MPs, despite her anti-socialist rhetoric.

It is often wondered why Astor was never offered a government position, despite her lengthy political career. In 1924, the Duchess of Atholl, Conservative MP for Kinross and West Perthshire, was instead selected by Stanley Baldwin and served as Parliamentary Secretary to the Board of Education. Atholl was seen as the more appropriate choice, given she could be relied upon to follow the party line, unlike Astor. 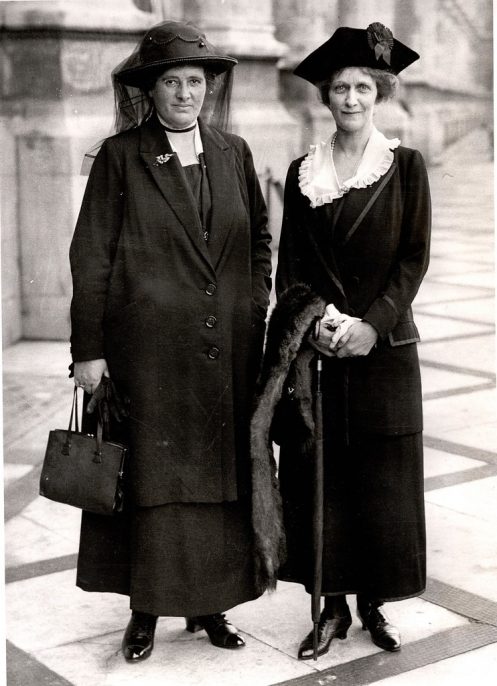 Astor even admitted herself ‘I have never been a good Party Member. In my time I have said harsh things about the Conservative Party and on many occasions I have found myself out of step with the Party.’ Throughout her political career, Astor fostered relationships with fellow female MPs and worked across party to pass legislation on issues related to women and children. She was particularly close to the Liberal MP Margaret Wintringham who was elected in 1921.

As a historian, there is always something remarkable about reading the personal papers of the individual you are studying first hand, and in this case, holding in my hands the numerous pages that make up Astor’s autobiography. Although not complete, Astor’s unpublished autobiography is an invaluable source that reveals the thoughts and feelings of a pioneering figure. Whilst it must be acknowledged that Astor would have wanted to portray herself in a favourable light, her autobiography remains an informative and insightful read, and just like Astor, particularly humorous at times.

Image 1: Astor campaigning, courtesy of The Box, Plymouth (for use with Astor100 projects only).

Lisa Berry-Waite is a History PhD candidate at the University of Exeter and the recipient of a Leverhulme Trust studentship to work on the project ‘The Age of Promises: manifestos, election addresses and political representation.’ Her research focuses on the British parliamentary election campaigns of female candidates, 1918-1931.

Celebrating 100 years since Nancy Astor became the first woman MP to take her seat in the House of Commons: Lisa Berry-Waite