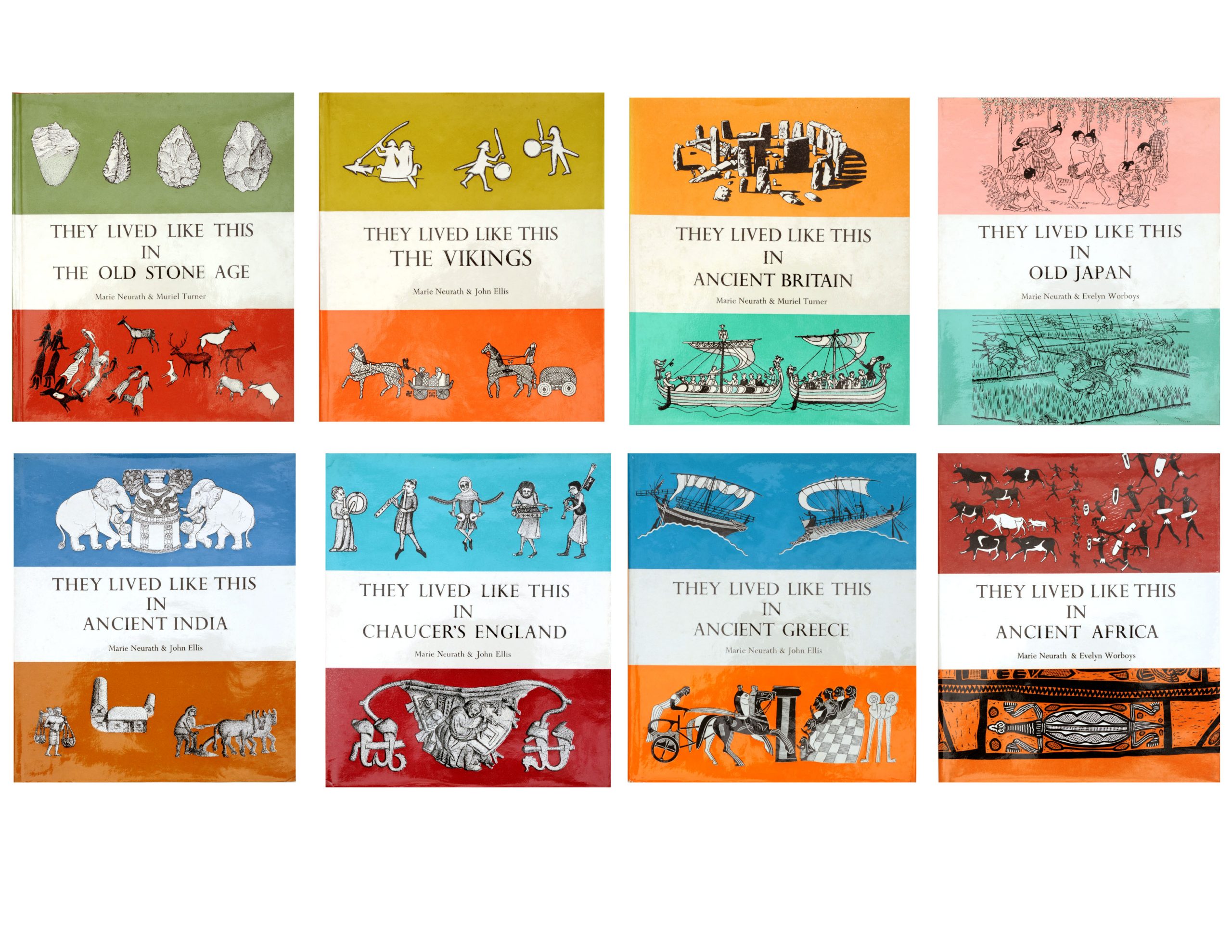 CBCP Co-Director, Sue Walker, was invited to talk about Marie Neurath’s work at ‘Exploring Collections, Archaeology and Empire – Creating Narratives for Younger Audiences, past present, future’, a workshop organised by Amara Thornton in collaboration with the British Museum in December 2020.  Material relating to Marie Neurath’s children’s books forms a substantial part of the Otto and Marie Neurath Isotype Collection in the Department of Typography & Graphic Communication at Reading. The images in this post are from this collection. Sue’s talk drew particular attention to Marie Neurath’s collaboration with the British Museum.

‘They lived like this’ was a series of books about histories of everyday lives of ancient civilisations, written and designed by Marie Neurath. It was an unusual publishing project stimulated by film strips produced by Common Ground between 1953 and 1965 that used photographic images from museum collections. Marie Neurath worked on these film strips, sourcing material including from the British Museum and expertise from its keepers and curators. She recalled:

I had to immerse myself in this new medium: much less should be put into one frame than in the page of a book. Drawings and photographs lend themselves equally well to being used on film and we were able to mix chronological tables, diagrams and maps with photographs of landscapes, people and works of art. For Egypt the magnificent murals and reliefs of Egyptian tombs can be used directly as pictures of their lives.

Marie was taken with the idea of using contemporary imagery to represent everyday life, and realised the potential for expanding the idea into books for young people. Max Parrish needed persuading, but eventually agreed. ‘They Lived Like This’ was a series of twenty books published between 1964 and 1971. Some were translated into Danish, German and Swedish. As with the making of all her children’s books, Marie worked with a small team: researchers, writers, illustrators, typesetters and artworkers.  She was involved at every stage and there was close dialogue with publishers. 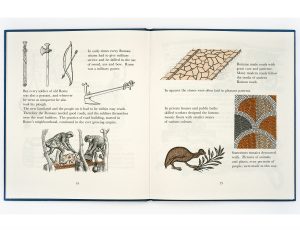 Each page in the books was designed as a unit – with the relationship between pictures and text carefully worked out through numerous iterations – evidence by sketches and drawings. The images were carefully sourced by researchers working with subject experts who recommended reading and sources. Illustrators worked from photographs in a detailed representational style. Just as much care was taken with the text to ensure that it was child friendly and factually accurate. She explained:

We showed how people lived through their own means of representation: cylindrical seals and Egyptian wall-pictures; Greek and Cretan vase pictures; Chinese, Japanese, Mexican forms were introduced … Only occasionally were there Isotype presentations in the narrow sense, but all the pictures had to be read in conjunction with the text.

The books were well-received, as in this comment in Books and bookmen (December 1968) about They lived like this in ancient Rome (1968): ‘… demonstrates clearly that it is possible to write a serious history book for young readers which is both informative and absorbing – and above all does not talk down to them.’

‘They lived like this’ is a distinctive series in many ways not least the thorough sourcing of authentic and relevant images and the care with illustrations that were made from these. As with all Marie Neurath’s children’s books teamwork and partnership underpinned inclusivity in her approach to content generation and design.

Images from the presentation can be seen here: