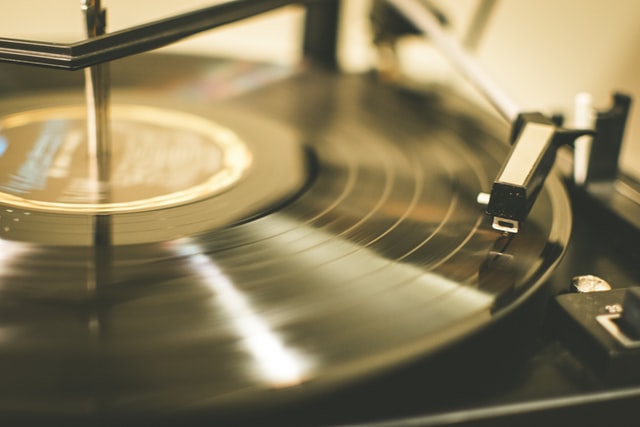 By D-M Withers, Visiting Research Fellow at the Centre for Book Cultures and Publishing, University of Reading.

Since founding in 1952, the Argo Record Company had learnt to make a virtue of its eclectic catalogue. Recordings of steam trains, the choral music of Gustav Holst, Trinidadian folk performed by Edric Connor and the poetry of W.B. Yeats sat alongside each other, seemingly without contradiction.

Argo prized themselves on ‘Quality—Variety—Distinction.’[1] They were the record company version of the BBC’s Third Programme, engaged in ambitious post-war cultural projects that intended to spread literary quality and aesthetic uplift to the many.

In the 1950s and 60s, Argo often worked in partnership with publishers and cultural institutions to produce records. Between 1957 and 1964 they collaborated with the British Council and Cambridge University Press on an ambitious project to record the Complete Works of Shakespeare. This was followed, in September 1963, with The English Poets from Chaucer to Yeats. All the major English Poets had their own LP with complete or abridged versions of the poems read by professional actors. Harley Usill, Argo founder and Director, expressed hope that critics would receive them as ‘the finest, the most extensive and the most scholarly anthology of English poetry’ available.[2] Alongside the records, Oxford University Press published short pamphlets, priced 2s. These featured the poetry on the LP, to be read alongside the recordings, or by themselves.

When LPs were new

When Argo began publishing sound recordings in the early 1950s, Long Playing Records were a new – and disruptive – publishing format. ‘When you played back that record [of T.S. Eliot’s ‘The Waste Land’] to people for the first time’ Usill remarked in an oral history conducted in 1984, ‘after 5 minutes they expected you to get up and turn it over, after ten minutes they started to get a bit anxious. After a quarter of an hour, they were vaguely aware they were going to have to sit and listen to the whole poem…a twenty-five-minute record side was quite an experience in those days.’ Usill’s interests were musical and literary. The extended time of the LP, coupled with the format’s material durability and sleeve’s aesthetic potential, provided the perfect medium to reimagine existing literary texts through music, performance, and sound.

Alongside these grand literary projects, Argo collaborated with publishers to produce educational records. With Macmillan, they released Rhyme and Rhythm (4 volumes, 1965), for primary age pupils, and Poetry and Song (14 volumes, 1967-68), aimed at secondary school students. As a publisher of literary works, Argo’s relationship with Macmillan stretched back to the early 1950s. They corresponded with the publisher to ask permission to reproduce lyrics on album sleeves, and to establish rates for copyrighted materials.

Quantifying the value of copyrighted works – how much is the printed word worth when it becomes recorded speech? – was a not always straightforward process. This problem was magnified because the Argo/Macmillan anthologies used excerpts of several hundred short poems, each clocking in at 10-20 seconds long. In 1963, Argo paid royalties at 1/2d (3.5p in today’s money) per minute, creating a potentially overwhelming administrative burden for company’s small team.

Eventually, Argo agreed to pay Macmillan an overall royalty for each record sold, simplifying what was clearly a complex – and again ambitious – recording project.[3] These collaborations provide an early example of how publishing companies negotiated rights exploitation for copyrighted materials when such materials are transformed into new mediums and commercial products – a form of revenue generation central to creative economies in the contemporary, digital world.

With Penguin Education Argo released Voices (6 volumes, 1968). This was a series of educational books and records that formed part of a new scheme run in partnership with the Schools Music Association. The aim was to innovate music education, modelled on the Nuffield Foundation’s approach in the field of Science and Maths.

In the business sphere, Argo hoped that working in partnership with Penguin Education would enable the companies to share responsibility for publicity and promotion. Books and records, as a novel multi-media package, were nonetheless not an easy sell in the late 1960s. To begin with, these bulky products created distribution and selling headaches. On a purely logistical level, there was the challenge of how to handle the records at Penguin’s distribution centre in Harmondsworth. Despite Penguin Education Managing Director Charles Clark anticipating warehousing problems in March 1968, by October the following year he reported to Usill that handling issues remained, but were close to being resolved.[4]

Then there was the big challenge – which no doubt hampered the Argo/MacMillan collaboration – that Argo, as a record company, faced barriers getting its products into the hands of booksellers and wholesalers. Penguin Education helped with problem solving where they could, proposing a workaround with Leeds-based educational specialists E.J. Arnold.

Another area that hampered synchronous collaboration in the late 60s creative and cultural industries was accounting for purchase tax. As ‘essential’ goods, books were exempt from purchase tax. Records, as ‘luxury’ items, were not, which created new accounting considerations for Penguin Education.[5] The Argo/Penguin Education collaboration was beset by cultural differences too. Argo’s early literary records were expressions of cultural distinction, writ in sound. Usill expressed displeasure at Voices editor Geoffrey Summerfield’s preference for contemporary poetry over canonised works. On the Penguin Education side, Martin Lightfoot was concerned that Argo did not share the division’s political convictions.[6]

Voices certainly had a radical and experimental edge. Leading figures in the post-war folk revival published on the Argo label – Ewan MacColl, Peggy Seeger and members of The Critics Group – provided musical accompaniment. Even today, Summerfield’s liner notes read like a playbook for ‘free’ improvisation, a call to reject training and embrace sonic experimentation. ‘The classroom is full of varied and interesting noises – desk-lids, window panes, milk bottles – which can be drawn together and orchestrated by children […] No conventional musical knowledge or ability is needed.’[7]

In the space of a decade, Argo’s literary publishing changed significantly. From statement projects of ‘great’ works of English literature, to records that celebrated the educational value of everyday creativity, these records represent the diverse ways the LP record as a publishing format democratised cultural access in the post-war period. Through partnership working with established and new publishers, Argo opened up new multi-media practices and possibilities within the publishing industry, breaking ground for others to follow.

[5] Thanks to Maria Vassiliopoulos for this point.

D-M Withers is a researcher writing about cultural dynamics in feminist publishing and history. Their latest book is Virago Reprints and Modern Classics: The Timely Business of Feminist Publishing. D-M is currently Visiting Research Fellow at the Centre for Book Cultures and Publishing at the University of Reading.