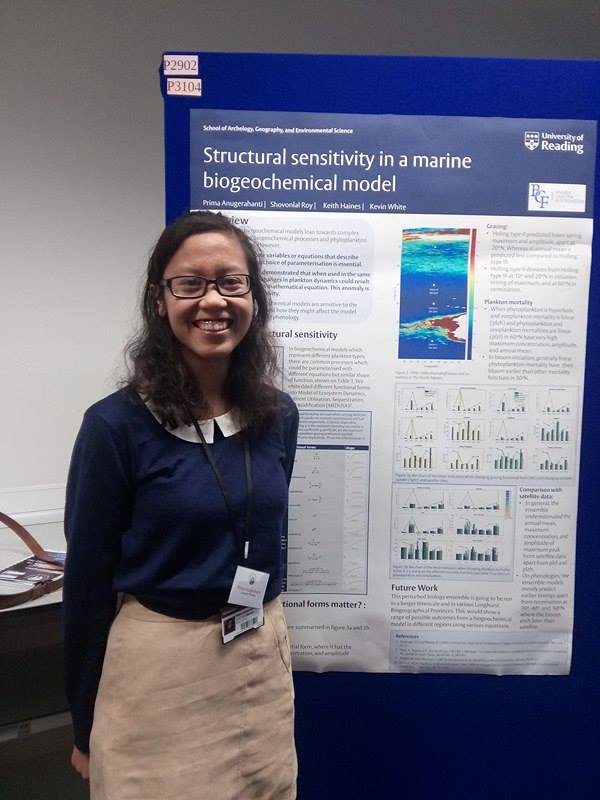 Prima attended the Challenger Conference in Liverpool and gave a poster presentation about the initial results on the effect of structural sensitivity. The focus was on chlorophyll concentration and phytoplankton phenology. She also gave a talk about her project on the Ocean Modelling Meeting. The conference is noted for its training for early career scientists, networking events, and outreach.

Abstract
Marine biogeochemical models used to study the seasonal cycles of phytoplankton and the dynamics of marine ecosystem are sensitive to how the biogeochemical processes are modelled and parameterised. Earlier studies have shown that a slight change in model structure and parameterisation may lead to a major change in system dynamics. We investigate how biogeochemical models are sensitive to the choice of functional forms and how they might affect the model prediction on phytoplankton phenology and associated indicators. This is done by simulating various forms of marine biogeochemical models, a simple nutrient-phytoplankton-zooplankton (NPZ) and an intermediately complex MEDUSA model, embedded with different functional forms on each process, such as nutrient uptake, zooplankton grazing, and plankton mortalities. A list of phenological parameters and ecological indicators were computed from the models and compared with those derived from the in-situ data and satellite observation. We have reported on how structural sensitivity may affect the outcomes of simple to complex marine biogeochemical models.