In order to forecast space weather, it is necessary to accurately model the solar wind, the continually expanding solar atmosphere which fills the solar system. At present, telescopic observations of the Sun’s surface are used to provide the starting conditions for computer simulations of the solar wind, which then propagate conditions all the way from the Sun to Earth. But spacecraft also make direct measurements of the solar wind, which provide useful additional information that is not presently used. In this study we use a simple solar wind model to develop a method to routinely “assimilate” spacecraft observations into the model and thus improve space‐weather forecasts. This data assimilation (DA) approach closely follows that of terrestrial weather prediction, where DA has led to increasingly accurate forecasts. We use artificial and real spacecraft observations to test the new solar wind DA method and show that the error in predicting the near‐Earth solar wind can be reduced by around a fifth using available observations. 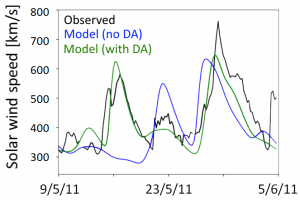 Model near-Earth solar wind speed before (blue) and after (green) assimilation of STEREO in situ observations. The DA enables the model to capture a previously missed fast stream, corrects a false alarm and improves the timing of a third stream.