Background The volcanic ash clouds produced by Icelandic volcano Eyjafjallajökull in April/May 2010 resulted in major logistical and financial issues for the aviation industry. During the early phases of the eruption, the London Volcanic Ash Advisory Centre (VAAC) and the Civil Aviation Authority (CAA) took a ‘no tolerance’ approach and grounded all aircraft at risk to any suspected concentration of volcanic ash in the air. This resulted in the total shutdown of airspace over large parts of Europe from 15-23 April 2010, leaving millions of air travellers stranded. In response to the crisis, the CAA, in collaboration with Rolls Royce, produced the ‘safe-to-fly’ chart. As ash concentrations are the primary output of dispersion model forecasts, the chart was designed to illustrate how engine damage progresses as a function of ash concentration. Concentration thresholds were subsequently derived based on previous ash encounters. Research scientists and aircraft manufactures have since recognised the importance of volcanic ash dosages, the accumulated concentration over time. Dosages are an improvement to concentrations as they can be used to identify pernicious situations where ash concentrations are acceptably low but the exposure time is long enough to cause damage to aircraft engines.

The project Funded by the Natural Environment Research Council (NERC), under the “Environmental Risks to Infrastructure Innovation Program”, we are currently developing a proof-of-concept volcanic ash dosage calculator in collaboration with airline operators and regulators. This innovative, web-based research tool takes advantage of interactive data visualisation to communicate the uncertainty inherent in dosage calculations. To calculate dosages, we use NAME (Numerical Atmospheric-dispersion Modelling Environment) to simulate several Icelandic eruption scenarios, which result in ash dispersal across the North Atlantic, UK and Europe. Ash encounters are simulated based on flight-optimal routes derived from aircraft routing software. Key outputs of the calculator include the along-flight dosage, exposure time and peak concentration. The design of the tool allows users to explore the major areas of uncertainty in the dosage calculation and to visualise how this changes as the planned flight path is varied. We expect that this research will result in better informed decisions for aircraft routing during volcanic ash events through a deeper understanding of the associated uncertainties in dosage calculations. 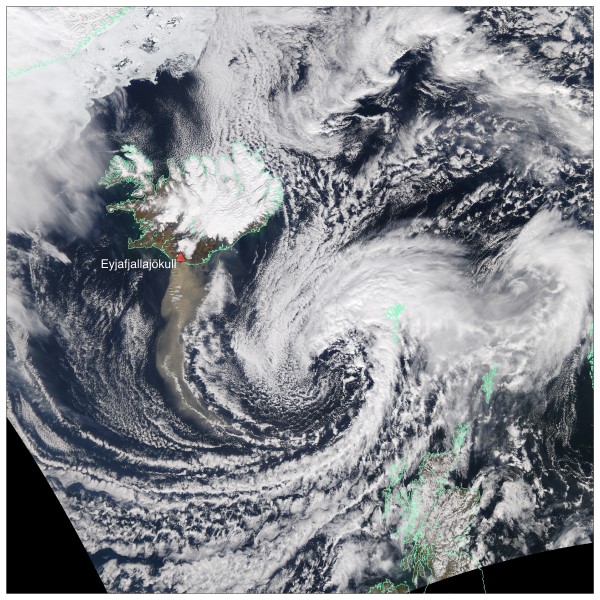 Satellite image of the Eyjafjallajökull ash plume on 19 April 2010, during the European airspace shutdown. The image was taken by NASA’s MODIS sensor aboard the Aqua satellite.