Dr Mai Sato has just published a report examining Zimbabwean citizens’ attitudes towards the death penalty in their country which concludes that public opinion needn’t pose a barrier to its abolition. She explains more in this new post for The Conversation. 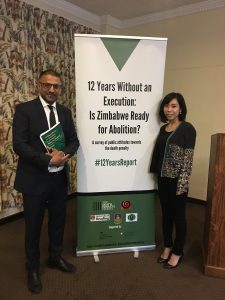 At the end of 2017, the world watched with keen interest as President Robert Mugabe was deposed after 37 years of ruinous rule, and replaced by Emmerson Mnangagwa, who promised “a new democracy”.

The change of power is also significant for those interested in Zimbabwe’s death penalty policy. Mugabe, around the time of his departure from office, had plans to resume executions. Advertisements were placed to recruit a hangman – a position that had been vacant since 2005. Mnangagwa, on the other hand, has been vocal in his opposition to the death penalty. Significantly, he himself had faced the prospect of being hanged under the government of Ian Smith, against which he fought during the liberation war.

Within four months of assuming office, Mnangagwa commuted to life imprisonment the death sentences of prisoners who had been on death row for more than ten years. 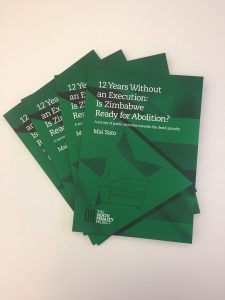 I have just written a new report, “12 Years Without an Execution: Is Zimbabwe Ready for Abolition?” that examines Zimbabwean citizens’ attitudes towards the death penalty. It explores what it means to be a “retentionist” or an “abolitionist” in a country that has not executed anyone since 2005, and the potential consequences of abolition.

The launch of the report forms part of a bigger project on the death penalty carried out by The Death Penalty Project, in partnership with Veritas (an NGO based in Zimbabwe) that’s funded by the the Swiss Foreign Office and the UK Foreign and Commonwealth Office. The report indicated that Zimbabweans are ready to embrace abolition if the government were to exercise political leadership to this effect.

Over the last four decades more and more countries have dropped the death penalty. In 1977 only 16 countries had abolished capital punishment in law or practice. By 2017 the figure had risen to two-thirds of the countries in the world – 142 in total.

There is progress in sub-Saharan Africa too. In 2016 the Constitutional Court of Benin ruled that all laws providing for the death penalty were void and death sentences could no longer be imposed. In the same year, Guinea abolished the death penalty for ordinary crimes.

Now Zimbabwe appears primed to join the trend towards abolition.

Zimbabwe is often referred to as a de facto abolitionist. This is because it hasn’t carried out an execution in more than 12 years. And under the country’s new constitution adopted in 2013 it restricted the scope of the death penalty. Changes included abolishing the mandatory death sentence for murder without extenuating circumstances. It also banned the execution of offenders over 70 years of age, and those who were younger than 21 (from 18) when they committed offences carrying the death sentence.

While the new Constitution restricted the scope of the death penalty, the policymakers felt that the Zimbabwean public was not ready to embrace complete abolition.

In addition, it was clear from the responses that support for the death penalty in Zimbabwe is symbolic – 83% of respondents weren’t even aware that the country hadn’t carried out any executions for more than a decade. And, 45% of respondents didn’t know the method of execution (hanging).

Too often, surveys on the death penalty concentrate exclusively on the punishment, forgetting that it is one of the many policies to control crime. In our survey, respondents were asked to rank a range of policies to tackle violent crime, which included the death penalty.

Both those who wanted to retain the death penalty, and those in favour of abolishing it considered moral education and reducing poverty to be more effective than the use of the death penalty.

Public opinion has been cited as one of the reasons Zimbabwe is not ready to abolish the death penalty. But the findings in our report should serve to assure Zimbabwean policy makers that public opinion don’t need to pose a barrier to abolition. Indeed, the findings suggest that the Zimbabwean public is ready to accept abolition, should the government decide to move away from the death penalty in law – and in practice.

This post was first published on The Conversation on 22 May, 2018. Dr Mai Sato is a Lecturer in the University of Reading School of Law. Her report, ‘The Public Opinion Myth: Why Japan retains the Death Penalty’, and ‘The Wavering Public?’, a documentary she commissioned, have gone a long way to changing Japan’s received notions of the legitimacy of the death penalty. In 2017 she won a University of Reading Research Engagement and Impact Award for her research.