In the summer of 2020, as the UK’s first COVID-19 lockdown gave way (at least for some) to the ‘rule of six’, television screens and social media feeds filled with another news story. Black Lives Matter demonstrations were happening internationally, sparked by the murder of George Floyd by a Minneapolis police officer and speaking of a much longer history of racial injustice and police brutality.

For some, the fact of Floyd’s murder was a first, visceral confrontation with the contemporary reality of racism; for others, the global attention was a long-awaited acknowledgement of unequal and indeed inhumane experiences lived every day: at school, college, and university; in the workplace; under medical care; and simply on the street.

Of course, Black lives mattered before 2020, and Black people have been critiquing and contesting racism since long before the #BLM reading lists started circulating that summer. Black women in Britain have for decades been educating white audiences and offering solace, solidarity, affirmation and joy to their peers, by writing, producing, and performing plays and poetry that answer back to racism and sexism. My book – published a few months after Floyd’s death, but the result of nearly ten years’ research – tells this small part of the bigger story of Black creativity and resistance.

The book gives space to five theatre companies and artists:

The book charts the history and biography of each company and individual, drawing on new interviews and detailed archival research. It also analyses a selection of their plays and poetry, giving sustained attention to the significance of both staging and language. By looking beyond published playscripts to the wealth of material held in archives of various kinds, from institutional repositories to individuals’ attics, I was able to bring critical attention to many of these plays for the very first time. The book shows the rich aesthetic range of Black British theatre, foregrounding works that make meaning not just through speech but through music, movement, still and moving images, and non-naturalistic casting. None of this would have been possible without the generosity and trust of the practitioners themselves, who kindly shared their personal papers and manuscripts along with their memories.

My focus on theatre and performance poetry is not incidental: these are embodied art forms, through which the artists can respond to a culture of objectification by manipulating the presence of the body/ies on the stage. Looking comparatively at plays produced across the decades, I noticed that the practitioners often unknowingly did similar things: using cross-casting, cast-doubling, figurative gestures, audio-visual technology, and choreography, they all found ways to complicate the spectators’ gaze towards the (Black, female) performers, while simultaneously asserting – against the racism of Thatcher’s Britain, and beyond – ‘we are here’.

I call this an ‘intersectional’ aesthetic, borrowing the term coined in 1989 by American legal scholar Kimberlé Crenshaw. Crenshaw’s pioneering scholarship articulated how the oppressive systems of racism and sexism coincide (and this specific meaning of the term must not be lost as it is claimed for popular usage). As my book shows, Black British playwrights and performers were imaginatively portraying the fact of intersectionality years before it had that name.

As most of the plays featured in the book were staged in the 1980s and 1990s, I didn’t have the pleasure of seeing many first-hand. But even when reading typewritten scripts and watching grainy VHS recordings I felt myself addressed and challenged. Theatre teaches us that we are not isolated, autonomous, or pre-existent; rather, we are formed through our interactions with others. As a white British woman, I have certainly been changed by researching and writing this book. I feel more keenly the edges of my knowledge and experience, the blind-spots in my vision, and the beauty and humility and humanity of reciprocal care and learning. I also see more clearly the responsibility to use my academic platform well: to centre unheard voices, to say what matters. 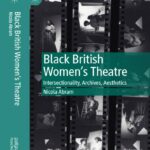 Dr Nicola Abram is Lecturer in the Department of English Literature and was awarded the Research Output Prize for Early Career Researchers 2022 for the Heritage and Creativity research theme. The prize was awarded for her monograph Black British Women’s Theatre: Intersectionality, Archives, Aesthetics (Palgrave Macmillan, 2020).