Twenty years ago, the terrorist group al-Qaida carried out the deadliest attack on US soil the world had ever seen. Overnight, al-Qaida founder Osama bin Laden became the most notorious terrorist to date.

Inspired by pan-Islamist ambitions and outraged by US foreign presence and intervention in the Middle East, this was the highlight of al-Qaida’s campaign to shatter the notion of US hegemony and invincibility. Their ultimate aim was to bring back the umma, the community of all Muslims once united by a political authority. 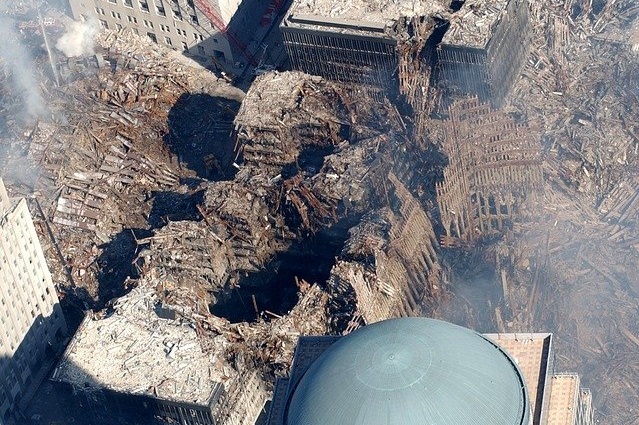 Al-Qaida first appeared on the terrorism radar in 1998 when it carried out simultaneous bombings on the US embassies in Kenya and Tanzania, killing 224 people and wounding more than 4,000. In October 2000, al-Qaida rammed a small boat filled with explosives into the USS Cole in the port of Aden, Yemen, killing 17 US navy personnel.

Following the strike on 9/11, so they reckoned, the US would withdraw their military forces from Muslim lands and end their support for its autocratic rulers, ushering in a modern day caliphate.

“I have only a few words for America and its people,” bin Laden declared in the aftermath of the attack. “Neither the United States nor he who lives in the United States will enjoy security before we can see it as a reality in Palestine and before all the infidel armies leave the land of Mohammed.”

Bin Laden’s expectations turned out to be a serious miscalculation. Instead of withdrawing military forces, the then US president, George W. Bush, moved swiftly to declare a global “war on terror”, calling on world leaders to join the US in its response.

In October 2001, when a US-led coalition went into Afghanistan to hunt down al-Qaida and oust the Taliban, who had allowed the organisation to operate in the country since 1996, bin Laden was caught off-guard. There was no strategy in place to ensure al-Qaida’s survival.

The 9/11 attacks turned out to be a short-lived victory for al-Qaida. Within weeks of the Taliban’s collapse, the majority of its leaders and fighters were captured or killed. Those who managed to escape, including bin Laden, went into hiding in the Federally Administered Tribal Areas of Pakistan, an autonomous area bordering Afghanistan.

For ten years, until he was killed by US special forces on May 2, 2011, bin Laden tried but failed to revive al-Qaida and influence its legacy.

The next phase (and arguably the biggest mistake) of the “war on terror” was the 2003 invasion of Iraq. The ousting of the Iraqi president, Saddam Hussein, who had viewed jihadist activity with disdain, led to a political vacuum allowing al-Qaida to rise under terrorist leader Abu Musab al-Zarqawi. Upon his death in a US bomb strike in June 2006, al-Qaida in Iraq would become the Islamic State of Iraq (ISI) and ultimately merge into the Islamic State (IS).

The highly publicised creation of al-Qaida “franchises” in Iraq and elsewhere including Egypt, North Africa and Yemen, among others, seemed to indicate the revival of al-Qaida.

These franchise leaders, all deeply involved in their respective local disputes, had much to gain from acquiring the infamous brand of al-Qaida. The appearance of the black al-Qaida flag in diverse corners of the world sent shockwaves to Washington. Terrorism experts in the west speculated about the reemergence of the group and the severity of its threat with precious little agreement amongst them.

Hidden away, bin Laden and the senior leaders of al-Qaida had little influence over the running of the new franchises. This is evident in terrorism researcher Nelly Lahoud’s careful reading of the “Abottabad letters”, files of internal communications recovered by US special operations forces during their raid on bin Laden’s compound in the Pakistani city of Abbottabad. In the letters, bin Laden lamented his “brothers” had become a “liability” for global jihad during the last year of his life. The new generation of jihadis, he concluded, had lost their way.

Upon bin Laden’s death in 2011, senior members of al-Qaida vowed to continue the global jihad, promising the worst attacks the world had ever seen.

While the vocal threats put al-Qaida back on the international terrorism radar, action never followed. The group formally continued to operate under the command of its new leader Ayman al-Zawahiri. However, it had no influence over IS, which was beginning to operate with impunity in areas across Iraq and Syria, and orchestrate suicide attacks in Europe.

By 2014, IS – under the lead of Abu Bakr al-Baghdadi – had replaced al-Qaida as the terrorist group most worrying to the west. Within five years, on October 27 2019 al-Baghdadi was also killed in a US military operation. IS was assumed to be, at least temporarily, defeated. It reemerged spectacularly on 26 August 2021 when IS-K, a local affiliate, claimed responsibility for the Kabul airport attack that claimed the lives of up to 170 people including 13 US service members – the deadliest incident for US troops in Afghanistan in a decade.

On August 30 2021 the US completed its withdrawal from Afghanistan, marking the end of America’s longest war. Less than a week later, the Taliban announced a new government and declared it an “Islamic emirate”. Sarajuddin Haqqani, a US “most wanted terrorist” is the new acting interior minister.

On the 20th anniversary of the 9/11 attacks al-Qaida might be defeated, but it is clear that jihadism and the ambition to (re)create a caliphate are here to stay.

Christina Hellmich is an Associate Professor in the Department of Politics and International Relations.