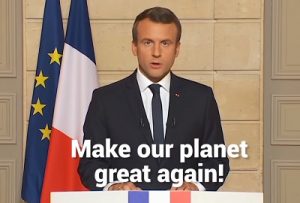 By Phil Newton, Research Dean for Environment, University of Reading

Science is a global business. Very few truly great advances in science happen these days without some level of international collaboration. A quick look at the list of recent Nobel Laureates for Physics tells that story.

But the organisation of science, like many other things, is influenced by politics. Which is how we should view the offer of French President Emmanuel Macron to recruit foreign climate scientists to French institutions.

Macron is riding the wave of populist politics that also helped sweep Donald Trump to victory in the United States. But Macron’s popularity is based on very different foundations to Trump’s. He has wasted little time in opposing the US administration’s policy on pulling America out of the Paris climate change agreement.

Macron has already made overtures to US-based researchers, disgruntled with Trump’s views and policies on climate change. At the weekend, he committed €30 million of public funding to help tempt some of them to cross the Atlantic.

Could this be the sign of a land-grab for the future of climate science? Could France become a new centre of gravity for the world’s best researchers in environmental physics?

Probably not. First of all, while €30 million isn’t an insubstantial amount, in the world of national-scale scientific grants, it’s a drop in the ocean. For Macron to be unveiling policies on this scale shows this has at least as much to do with his positioning of himself in opposition to Trump as it is to do with increasing the scientific capability of France.

The offer has irked some scientists already in France, who would like to see more funding for French research institutes. Others have called it a publicity stunt.

David Ferreira, an oceanographer in the Department of Meteorology, started his career in France. He points out that while Macron’s offer could help lure some high-profile climate scientists, there are still fundamental problems with the way French research positions are handed out.

“The system is still very rigid,” he said. “There is a two-speed system in French universities between faculty and research-only positions. With heavy teaching loads and little time for research, French faculty positions are unattractive when compared with equivalent positions in other countries.

“If you want a research-only position, you need to be known by lots of senior people, which means you have to spend a lot of time networking, rather than getting on with your research. Whereas in the UK, the hiring system is relatively straightforward, offering a fairer chance for all to compete, including outsiders.”

Of course, the UK science system is facing its own severe challenges right now, with international politics playing a role in our ability to stay at the top table of scientific research. With Brexit negotiations beginning this week, I and many of my colleagues are anxious that negotiators on both sides can quickly strike a deal which guarantees the rights of EU nationals in Britain – including many outstanding researchers – to remain here, and UK nationals to remain in Europe.

The UK also needs to ensure that a new, nationally-controlled system of immigration does not to cut off our ability to attract the best international students and staff. Otherwise, top British universities, including the University of Reading, will struggle to play a world-leading role in scientific research.

In addition, it’s essential that after Brexit, UK researchers are still able to access the funding and collaborations that come with EU-funded research. Without that access, UK science could be diminished, as Europe’s brightest minds and most useful research facilities become more out of reach.

So while President Macron’s gesture is welcome in some respects, the real challenge is for the UK and the USA to get their own politics in order, to enable the very best climate science through a global scientific endeavour free of political dogma.