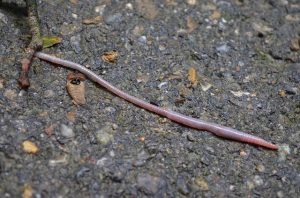 Earthworms are soil ecosystem engineers.  They are the key soil organisms that influence soil biology, nutrient availability and soil physical structure; and their abundance has been linked to significantly improving plant productivity.  The importance of earthworms has long been recognised, Charles Darwin stated “Without the work of this humble creature, who knows nothing of the benefits he confers upon mankind; agriculture as we know it would be very difficult, if not wholly impossible”.

However, natures ploughs, specifically large, deep burrowing earthworms, are decimated by conventional tillage.  This soil management practice accounts for >95 % of all conventional and organic cereal production in the UK. So, is this a threat we should be concerned about, could there be a future where no earthworms = no bread?  Soil management practices that sustain abundant deep burrowing earthworm populations often require a drastic change in conventional thinking.

The conversion from conventional tillage to conservation agriculture is the adoption of a new farming system using zero tillage (using specialised machinery), diverse crop rotations and permanent soil cover (such as mulches); and my research is investigating the impact of this system on soil health and crop productivity.  However, this system is not without controversy when #glyphosateisvital to zero tillage agronomy; igniting the public debate on ‘sustainable agriculture’.  Earthworms are a vital part of the soil system that generate key ecosystem services, the question is, do they play any role in producing the food that you choose to eat?

The impact of deep burrowing earthworms on soils is being showcased at our half-term event #wormscience at the Science Museum in London from the 29 – 31st May between 11 – 1pm; 2 – 4pm.