The way we produce our food has a big impact on the environment. Farmers globally need our support to do two jobs that are fundamental to our survival: feed the world, and look after our environment.

COP26 has been criticised for not adequately highlighting how focusing on farming can help cut emissions of greenhouse gases. The food sector accounts for around a quarter of global emissions. By comparison, aviation contributes two per cent.

We can’t ignore agriculture. At COP26, 90 governments have pledged to cut methane emissions by 30% by 2030. Methane is a powerful greenhouse gas produced in large volumes by grazing animals such as cattle, sheep and goats. 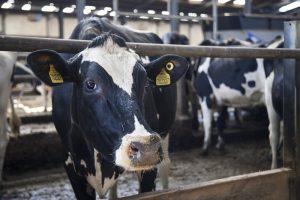 Some projects have looked at ways to change the diet of cattle to reduce methane emissions. Additives in feed have been shown to reduce methane emissions by 30% or more. As a world-leading agricultural research institution, the University of Reading has been involved in some of these international trials. This begs some questions: how do you change the emissions of cattle? And how do you measure a cow burp?

Most methane is produced by bacteria living in the digestive system of grazing animals, helping them turn grass and other hard-to-digest plants into useful nutrients. Change the bacteria with different feed or additives, and you cut the methane – while potentially also making the resulting milk or meat healthier for humans.

The environmental impact of cattle is not just from their own emissions. We also have to consider the impact of the system used to grow their food. Many animals are fed on a mixture of imported protein crops, such as soy beans, and on locally-harvested grass. The environmental impact of this can be forest habitat destruction, ammonia and nitrate pollution, and impacts on air and water. By working with soil, plant and animal scientists, and other experts, we have shown it is possible to feed cattle a good-quality, more locally-produced diet of a mixture of grasse, legumes and herbs that reduces the use of nitrogen fertilisers, while also cutting methane.

How can we tell? This is where regular farming might become Home Office-regulated animal research. Any procedure involving animals is tightly, and rightly, regulated by law in the UK to reduce harm. We can measure emissions accurately by temporarily keeping cows in respiration chambers – similar to their regular cattle stalls but in sealed, air conditioned glazed units where we can measure all the ingoing and outgoing air, water, food, milk, urine and faeces, to see how much methane is produced and where the carbon ends up.

As with all animal research, we apply the ‘three Rs’ – replacing the use of animals with other methods whenever possible; reducing the numbers of animals used in experiments to a minimum, and refining techniques to improve animal welfare. That’s why we have helped pioneer non-animal lab-based ‘gut models’, and use mathematical models based on existing data, replacing the use animals for some studies.

Moreover, healthy animals are more productive. This cuts waste, which is good for farmers and great for the environment. We have an active programme of animal behaviour science, using high-tech methods such as video tracking and accelerometers to help us design farm environments which improve animal health and welfare, and to monitor herds to show when an individual is unwell.

We already know that cows like being with others, staying well, having access to good food and shelter, and these are all things our cattle enjoy.

We applaud the efforts of anyone who, like us, is taking action to replace, reduce, or refine the impact their lifestyle, or their diet, is having on animals. While vegan and ‘flexitarian’ diets become more popular in the UK, so does demand for milk and meat elsewhere – and dairy and meat farming will always be part of the mix. Rather than ignore or oppose farmers and their methods, we need to give support of the right kind to the hundreds of millions of farmers around the world. Theirs is the real front line in the war with climate change.

Dr David Humphries and Dr Zoe Barker are researchers in the Centre for Dairy Research, University of Reading