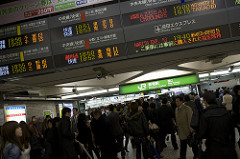 Since the 1997 Tokyo subway attack with sarin nerve agent, Japan’s punitive criminal justice system has increasingly revolved around fear and retribution. The international community will be keeping a close eye on the fate of the 13 attackers still awaiting execution, says Mai Sato, in a new post for The Conversation.

I was at a school camp when the now-defunct doomsday cult Aum Shinrikyo attacked morning commuters on Tokyo subway lines with sarin gas. It was the spring of 1995 and 13 people were killed and more than 6,000 injured. I remember being asked by my teacher to ring my parents in case they were caught up in the attack. Luckily, my father escaped, but only by ten minutes or so. The thought that he could have been a victim left a lasting impression on me.

I remember watching hours of television reports about the attack. The whole nation was glued to the story, and to revelations that the attack was carried out by a cult. Founded by Shoko Asahara – real name: Chizuo Matsumoto – Aum Shinrikyo believed that the world would come to an end in 1997. It was soon established that its members had murdered an anti-Aum lawyer and his family back in 1989, and had carried out other sarin attacks, including a 1994 attack in Matsumoto that killed eight people and injured more than 500.

Now, nearly two decades later, Aum Shinrikyo is back in the news again. In January 2018, Japan’s supreme court upheld the life sentence of an Aum member Katsuya Takahashi, the last Aum member to be tried for the attack. The same month, Japan’s Ministry of Justice also transferred some cult members who’ve been sentenced to death to various detention centres where executions can be carried out. The executions could come at any time, and won’t be announced until they’re concluded. The prisoners themselves will only be notified of their executions on the day.

One might wonder why it took so long to conclude the Aum trials. But the cult’s founder was just one of 190 people who were prosecuted for various crimes committed by the cult, and three members who were on the run, including Takahashi, were only arrested in 2011. The Japanese Ministry of Justice does not normally execute prisoners on death row if an accomplice’s case is still pending. With the last Aum member’s trial completed, the slated executions can now take place.

Almost all of the 13 death row inmates awaiting execution are requesting retrials, but their chances don’t look good. Two unrelated executions were carried out in December 2017 even though the prisoners concerned had retrial requests still pending.

In the waiting line

It’s not unusual for Japanese death row inmates to spend decades awaiting execution; Asahara himself has been on death row for 14 years. Some die in solitary confinement, where death row prisoners are kept, without formally being executed. As I have written elsewhere, long years spent on death row – referred to as the death row phenomenon – are also a feature of the US criminal justice system. The trials and appeals meant to minimise the possibility of wrongful execution often result in prisoners being on death row for a extended time.
But in Japan, this isn’t the only reason executions are delayed. The decision of whom to execute next is not made public. International and domestic law prohibit the execution of such people.

Yet while Asahara’s mental health is reported to be extremely poor, the Ministry of Justice has maintained that he is fit enough to be put to death. The ministry seems downright determined to see him executed. As one senior justice official was quoted: “We cannot leave someone who committed such heinous crimes to die from disease.”

What will the executions tell us about Japan’s attitude to justice today?

Since the Tokyo attack, Japan’s punitive criminal justice system has increasingly revolved around fear and retribution. While Japan’s annual murder rate has steadily decreased since the attack, dropping below 1,000 in 2013, people’s fear of crime has increased, and victims’ rights groups have gained enormous power. The public has duly become ever more involved in the criminal justice process. Judges started to sentence more prisoners to death after the attack; justice for the victims, it seemed, demanded nothing less than a capital sentence.

These trends are not unique to Japan. The UK also went through a period of being “governed through crime” where politicians take advantage of the pubic’s fear of crime and promote punitive policies which often result in increased imprisonment rates. The 1993 murder of toddler James Bulger by two ten-year-olds spurred a similar “punitive turn”. As the public expected the justice system to punish the 10-year-old defendants, sentencing generally became harsher, and the prison population expanded.

But unlike the UK, when the punitive culture emerged in Japan, the country was still an executing state. With limited financial support provided for them by the criminal justice system, a death sentence functions as a symbol of justice for victims’ families in Japan.

But it’s a signal to the rest of the world as well. Executing Aum members would prove that Japan still accepts not just symbolic death sentences, but the death penalty in practice. With the UN’s 14th Congress on Crime Prevention and Criminal Justice to be held in Tokyo in 2020, the international community will be keeping a close eye on how the Japanese government deals with the 13 Aum death row inmates and their sentences. Bearing in mind that more than two-thirds of the countries in the world have abolished the death penalty in law or practice, these 13 executions would further alienate it from the worldwide trend against the death penalty.

This post was first published on The Conversation, 22 March 2018. Dr Mai Sato is a Lecturer in the University of Reading School of Law. Her report, ‘The Public Opinion Myth: Why Japan retains the Death Penalty’, and ‘The Wavering Public?’, a documentary she commissioned, have gone a long way to changing Japan’s received notions of the legitimacy of the death penalty. In 2017 she won a University of Reading Research Engagement and Impact Award for her research.