We’ve all seen news footage of the devastation that flooding can cause – buildings smashed to driftwood, crops destroyed and people huddled on rooftops in a brown sea of floodwater. Flooding hits countries with limited resources the hardest. But what if we could put in place humanitarian aid – clean water, clothes, food, shelter – before a drop of rain has even fallen? 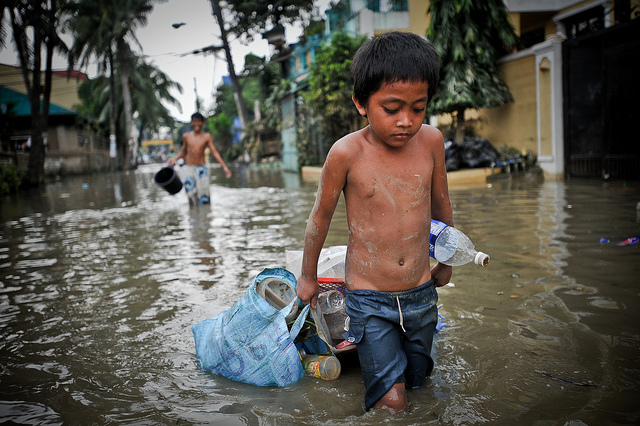 After being interrupted from her skype call with Red Cross Red Crescent Climate Centre in the Netherlands – one of several international partners with whom she works – Liz explains more.

“It’s quite interdisciplinary research. So it’s not just about forecast skill but about what actions you would take, which of them work best, how it fits within the wider development agenda. You don’t want to make a community dependent on aid. It’s much better to improve their long-term resilience.”

The science side of Liz’s research is trying to better understand how teleconnections– patterns of ocean warming that change atmospheric circulation and affect rainfall thousands of miles away – might predict floods. Her team also works with the Global Flood Awareness System for forecasting at the European Centre for Medium Range Weather Forecasts, based just up the road in Reading.

That’s linked up with practical action in the form of ‘forecast-based financing’ research; setting up forecast-based thresholds to trigger the release of aid. As Liz explains, this work not only benefits those affected by floods but it also means the UK tax payer’s money is better spent on international aid.

“It might even be cost effective to act on a 20% chance of a flood. So even if a flood only occurs one in five times that preventative action is taken, the benefit of putting aid in place before the flood happens outweighs the money supposedly spent in vain the other four times. You need some very willing donors and there’s a bit of a challenge in terms of communicating that. But actually, in the long run over however many number of forecasts and floods it does make sense.”

The initiative was successfully put into action in Uganda in summer 2017, with aid distributed a day or two before floods hit, which she thinks is “not a bad start.”

A keen traveller, Liz’s choice of career was partly shaped by people she’s met across the globe. She recalls an encounter with a taxi driver in Cambodia who drove her friend to a clinic after she’d been bitten by a monkey: “He broke down in tears and said that his daughter had died of malaria there the year before. It just felt stupid and unfair because back at our hotel we had malaria medication. I realised then that I wanted to use my skills to support people in need – to be involved in the best way that I could be involved.”

After undergraduate studies and a PhD in Geography at Bristol University she did post-doctoral research at Oxford University, before gaining a prestigious Leverhulme Early Career Fellowship at Reading. She’s been leading FATHUM since 2016.

With its strengths in interdisciplinary research and forging partnerships across the globe, Reading has been the perfect place for her research. She says: “It’s a really welcoming place to work and there are people across the University who are really interested in collaboration so it’s a good environment to be in. Part of my job is also communicating and collaborating with people on different continents and bringing together that knowledge. It’s really nice to work as part of an international community”.

In the coming years, Liz hopes that FATHUM will continue to support and influence the new Red Cross Red Crescent forecast-based financing mechanism; a scaled-up version of her research. Ultimately she hopes to see better early warning systems for floods everywhere, not just in wealthier countries like the UK.