Flooding expert Professor Hannah Cloke puts the recent heavy rain across the UK in context and gives her top tips for future flood preparedness in a new post for The Conversation. 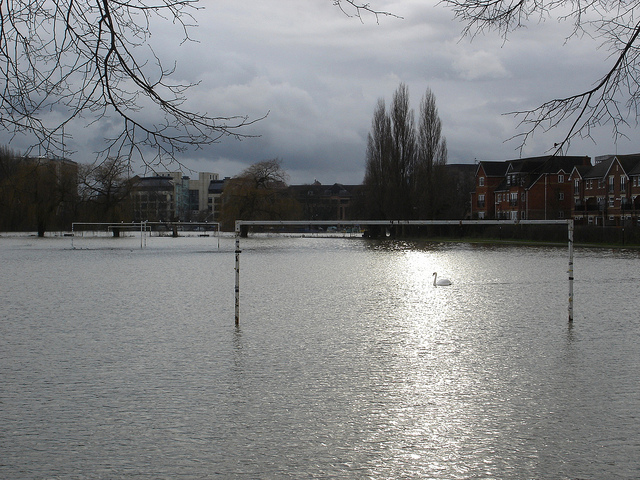 Parts of the UK had more than a month’s rain in one day on Monday June 10. More rain on the following Tuesday, particularly in the north of England and Midlands, created localised flooding. Sinkholes appearing on the M25 – one of Europe’s busiest motorways – and closed train lines have created expensive travel chaos. The flooding of hospitals and other essential services has even put lives at risk.

In the middle of all this, groundwater levels across the country are much lower than normal. There’s been little rain between 2018 and 2019 – the winter was drier than normal and it wasn’t so long ago that Britain was basking in one of the warmest Easter weekends on record. Still yellowing lawns suggest that hardly any rain has fallen since.

This isn’t an usual pattern of weather and it isn’t specifically linked to climate change. Slow-moving, intense bands of rainfall can emerge in the summer, though wetter Junes can possibly be linked to climate change as the jet stream – which is responsible for steering much of the weather systems we get over Britain – changes due to a warming atmosphere.

You might expect the dry ground to soak up all the water, but it hasn’t for several reasons.

The rainfall has been so intense that the ground can’t soak it up fast enough. So many of the surfaces in urban areas of the UK are paved over and don’t allow water to soak through naturally, causing huge amounts of run-off.

Smaller rivers respond very quickly to heavy rainfall, which is why we have seen many smaller rivers and tributaries bursting their banks and causing localised flooding. Many of the flood warnings in place in the north of England and Midlands are for tributaries and smaller rivers with names that many people have never heard of before, but these often flow through urban areas and close to homes and businesses. Whatever the river is called, it’s not much fun when it’s flowing through your kitchen.

The bigger rivers on the other hand, such as the Thames and Severn, take much longer to respond to heavy rain and will only flood when water tables are much higher than they are at present. Lower groundwater levels mean that larger rivers are able to swallow up extra water without too much trouble. If rain keeps up for another month or two, we could be in trouble. This is what happened during the winter of 2013-14, when months of rain meant the Thames flooded towns like Oxford, Staines and Wraysbury, and low-lying parts of Somerset resembled a lake.

What does this mean? It’s a reminder that floods are pretty simple – lots of rain very often equals flooding, no matter what has happened with the weather in previous weeks and months. It also shows that floods are made worse by the way people have changed the landscape – paving over areas so that water runs off the ground too quickly, creating floods that are essentially human-made.

Floods are only a problem when people are in the way of them. Britain needs to build more homes, but where and how many will affect the risk of more floods in future. There are still plans to build homes on floodplains, which we should avoid. The construction of sustainable drainage systems – ditches and ponds that hold back water where it falls and prevent heavy rain from rushing into rivers too quickly – hasn’t gone far enough.

Dealing with flooding is a team effort – it requires collaboration between flood authorities, landowners, homeowners, community groups, and local and national government. Only by working together can effective action be taken. People very often have good local knowledge about flooding. They know when and where it will flood, and can sometimes be perplexed when “experts” tell them otherwise. Much of the political fallout during the 2013-14 flooding was not due to the damage itself, but anger from communities who felt abandoned or ignored.

As the UK commits to limit future climate change by setting emissions targets, people must consider the costs of the climate change people are already experiencing. This means changing how we live our lives, not just to prevent future floods but to deal with floods when they next occur. We must prepare better for floods, not just for the next decade, but for those next week.

This post first appeared on The Conversation, 12 June 2019. Professor Hannah Cloke is a hydrologist and physical geographer specialising in land surface modelling, flood forecasting, applications of Numerical Weather Predictions and catchment hydrology. She was recently honoured with an OBE for services to flood forecasting and the development of hazard early warning systems.