Water@Reading PhD student Rebecca Emerton is often asked how she got a paper published in Nature at such an early stage in her career. She shares her top five tips for getting published in a major journal and tells us about the research that caught the editor’s eye. 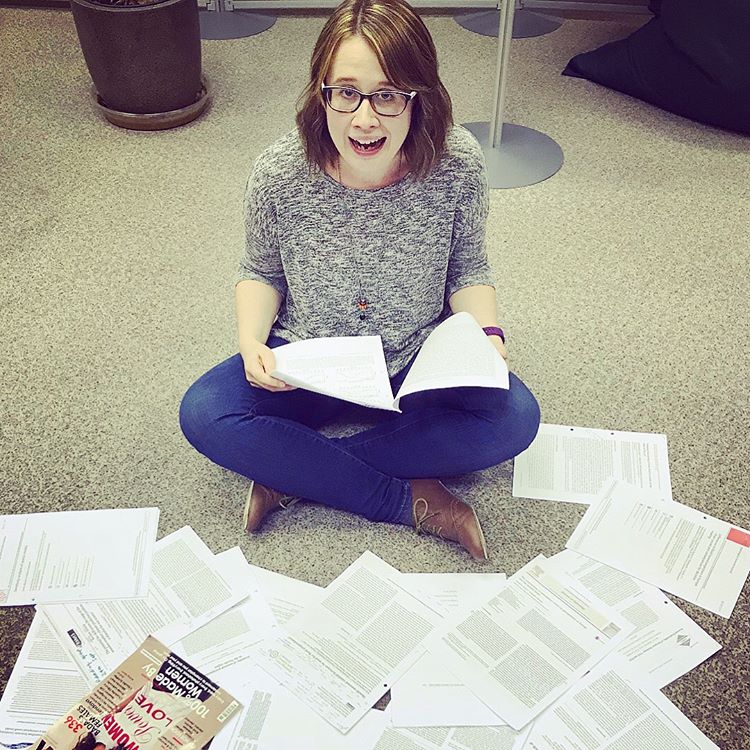 This question is the one that my PhD research, and my most recent paper, aim to address – looking at the links between El Niño and river flow to see if we can use it to provide earlier flood warnings. But the question I’ve been asked a fair few times over the past year in relation to this research, is “how on Earth did you publish a Nature paper as a PhD student?!” Sometimes out of genuine interest in the process of writing a paper for Nature, and sometimes with a tone that suggests surprise that such a thing is possible.

Since it’s now a year today since the paper in question was published, I thought it would be a good occasion to write a bit about the research, and how I ended up publishing it in a Nature journal. Plus I’ve included the top 5 things I learnt when writing and publishing this particular paper – we actually had a great talk on this at our department’s postgraduate conference last year, from a postdoc at the University of Reading who’s now an editor of a Nature journal. It was a really interesting insight into how things work from the other side of the paper, with some great publishing tips, some of which I wanted to share, along with my own experience! So, first things first:

What is my research paper about?

The research centres around the infamous phenomena called El Niño and La Niña, which see changes in the ocean temperatures in the tropical Pacific, and are well known to affect weather, and indeed river flow and flooding, around the globe. Since we know that El Niño and La Niña affect flooding across the world, I’m interested in whether we can use that link to predict where and when flooding might be more or less likely to occur during these events.

When an El Niño is declared, or even forecast, we tend to think back to memorable past El Niños (such as 1997/98), and begin to ask whether we will see the same impacts. Will California receive a lot of rainfall? Will we see droughts in tropical Asia and Australia? Will Peru experience the same devastating floods as in 1997/98, and 1982/83?

For organisations working at the global scale, such as governments and humanitarian aid, global overviews of potential impacts are key in taking decisions on where to focus resources during an El Niño. Typically, statistical products indicating the impact on rainfall are used to judge whether a region will experience flooding during an El Niño (or La Niña). The motivation behind this research was to provide similar information, but taking into account the hydrology as well as the meteorology. We wanted to answer the question ‘What is the probability of flooding during El Niño?’, for the global river network.

So I did just that – I created global maps  indicating the probability, based on what’s happened during past El Niños over the last Century (using a cool new dataset that I’ve described in the paper), of increased or decreased flood hazard (or in other words, unusually high or low river flow).

The question ‘What is the probability of flooding during El Niño?’, however, remains difficult to answer. We now have maps of the probabilities, but it’s clear that they are often lower, and much more uncertain, than might be useful – how do you make a decision on whether to provide aid to an area worried about flooding, when the probability of that flooding is 50%?

“We conclude that while it may seem possible to use historical probabilities to evaluate regions across the globe that are more likely to be at risk of flooding during an El Niño / La Niña, and indeed circle large areas of the globe under one banner of wetter or drier, the reality is much more complex.”

To go back to the example of Peru – during the winter of 2015/16, there was a strong El Niño. Our results estimated an ~80% likelihood of unusually high river flows in northern coastal Peru. And while flooding did occur, it was not as severe as expected, particularly given the strength of the El Niño. Then, in early 2017, a ‘coastal El Niño’ occurred (as it is known in Peru, but these events are not widely acknowledged as El Niños because the central Pacific is not anomalously warm) led to devastating flooding in several regions.

And Peru wasn’t the only place that didn’t see the impacts it expected in 2015/16; other regions of the world, such as the US, also saw more rainfall than normal in places that were expected to be drier, and California didn’t receive the deluge they were perhaps hoping for at the time. It’s important to remember that no two El Niños are the same, and El Niño will not be the only influence on the weather around the globe. While El Niño and La Niña can provide some added predictability, the impacts are far from certain.

How did I end up publishing a Nature paper as a PhD student?

Well first of all, the fact that I’m a PhD student really doesn’t have much to do with it at all – I’ve found that there seems to be this general assumption that PhD students shouldn’t aim to publish in high impact journals, because they’re “just PhD students”. I’ve had people express surprise that I was so bold as to even submit my research to Nature so early in my career – but if you have results to publish that fit with the content of those journals, then why not go for it?!

So that’s exactly what I did! I never set out to publish in Nature, that wasn’t the main goal – the aim was to do some interesting research and provide some hopefully useful information on the links between El Niño and flooding. When the analysis was finished, we had some really interesting results – findings that we wanted to share with a wider audience than the more subject-specific journals might reach, and Nature was the perfect journal to achieve this. With the encouragement and help of my amazing supervisors, I wrote it (which wasn’t always easy, since it’s a different style of writing but I enjoyed the challenge!), and submitted it. The worst that could happen was they would say no, right?

I have to admit I did set my expectations fairly low, not because I didn’t believe in the work, but because I knew that Nature receives ~200 papers a week, and publishes <8% of them. I was really happy (and a little relieved!) when my paper came back from review with positive comments. The editor then recommended that it be published in Nature Communications (with Nature journals, editors are able to recommend other Nature journals that the paper would fit with better, so you could submit to Nature and end up with your paper in Nature Climate Change for example, or Nature Communications in my case!), so it went for a further review there, et voila!

I learnt a lot from the process of writing this paper, but these are the top things I learnt that apply more generally to writing a paper for Nature journals:

Write the paper for the journal you intend to submit to! Read papers from that journal and get an idea of the style – Nature papers tend to be written more like a story of the work, rather than a paper split into distinct sections containing the method, results, conclusions etc.

The title is really, really important. Nature papers have a different style of title to most scientific journals – they’re shorter, and tend to be a bold statement – and no jargon!

And the abstract is too! Most people will read this to decide if they want to read the whole paper – you should use it to make people want to read more, and tell them why your findings are important, and the implications of the work. I’ve also heard that with the number of submissions to Nature, often editors will read the abstract only to decide whether to send the paper to review – but I can’t comment on whether this is true!

Write a good cover letter. Not all journals require a cover letter, and a lot of people write them off as unnecessary, but they can be a good way to introduce the paper and the potential impact of your findings beyond your field of research, and why the editor should consider it for publication.

Go for it! Obviously, not every paper will be suited to Nature, your findings will fit best with a certain journal and that may be a subject-specific one, or a technical one, or one covering a broader range of subjects with a wider audience. Submit your paper to the journal it will fit best in, with the readership that you want to reach!

You can read the full paper here:

This post was originally published on Rebecca’s blog, Everyday Scientist.