In a recent post for The Conversation, Simon Clarke outlines why, in most cases, wearing latex gloves isn’t a good alternative to hand-washing. 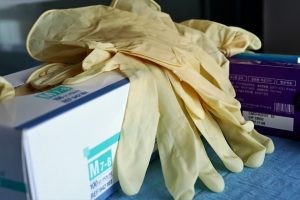 The COVID-19 pandemic has sparked a great deal of interest in how people might avoid getting infected. One of the methods public health officials strongly encourage is handwashing. By now, everyone should be adept at washing their hands like a surgeon preparing for theatre.

People touch their faces all the time, often without realising, so an infected person can get the virus on their hands from their mouth or nose and pass it on to others, either directly (although handshakes are now strongly discouraged) or by contaminating a surface which others the touch, such as a door handle, keyboard or handrail.

But repeatedly cleaning your hands with soap and water or alcohol-based hand sanitiser can lead to damaged skin and soreness. It would seem that a simpler solution is to wear disposable gloves, which are often made of latex. But is this as safe as frequent hand washing?

For a better idea of how to use gloves properly and, indeed, what their limitations are, it’s helpful to look at an environment where they are used routinely, namely hospitals.

It’s important to remember that most gloves that come in large packs are not sterile and are associated with a risk of cross-contamination and spread of disease. This is because they are often used when they aren’t really needed, put on too early, taken off too late or not changed at the appropriate times.

Gloves should only ever be worn to protect healthcare workers from blood, bodily fluids or certain drugs. (Hand washing is unlikely to be of any use if a healthcare worker is exposed to a toxic chemotherapy drug or blood-borne virus.)

When the patient needs protection, such as during surgery, gloves should be sterile. Either way, they need to be removed when they become contaminated and the same pair of gloves should never be used to touch more than one patient.

When you see someone wearing gloves in a food preparation or retail environment, it’s worth remembering that they may have had them on for hours and might have handled contaminated material with them. For example, did the person who’s just cooked your burger handle the raw meat with gloves on, only to then give you the cooked product while wearing the same pair of gloves?

Similarly, if someone has touched a contaminated surface with a gloved hand, they are just as likely to transmit contamination as someone who hasn’t worn gloves. Failing to change gloves when needed is no different from failing to wash your hands.

Indeed, wearing gloves may make someone less aware that they have contaminated their hand when they might otherwise notice and simply wash them. If you handle something contaminated with coronavirus and then touch your face, the gloves won’t stop you from getting infected.

Wearing gloves is a convenient way to minimise contamination and keep our hands clean, but they are only really useful when handwashing is either not possible or insufficient to prevent chemical or biological contamination. And if they are worn, will need to be changed as often as hands need to be washed.

It’s also worth remembering that while soap or hand sanitiser can cause unpleasant soreness, latex gloves can cause allergic reactions and irritation.

This article was originally published on The Conversation. Read the original article.