While President Abdel Fatteh al-Sisi’s success in this week’s Egyptian elections was guaranteed, support for him is flagging and monumental challenges to his power lie ahead, says Professor Dina Rezk in a new post for The Conversation. 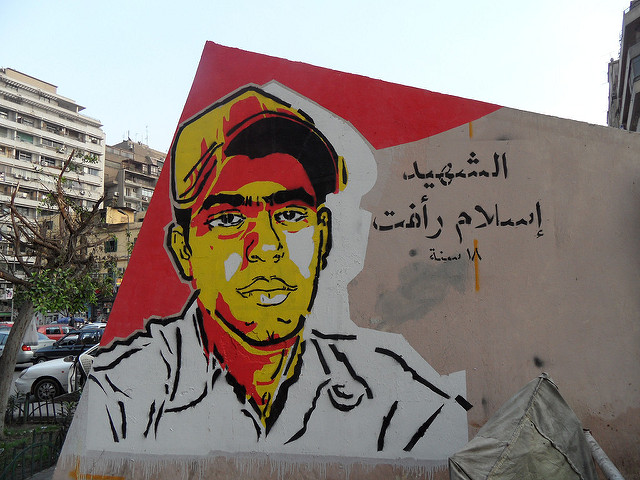 “Will you be voting for Sisi?” I asked a waiter in St John’s Wood, London as he brought me a steaming bowl of Kosheri, an Egyptian street food. He nodded apathetically, shrugging his shoulders, and replied “Who else is there?”

The outcome of this year’s Egyptian elections is a foregone conclusion. Even many of President Abdel Fatteh al-Sisi’s supporters would concede that the so-called “opposition” candidate, Moussa Mustafa Moussa, was merely a prop to allow the vote to be called a multi-candidate election rather than an empty referendum on a president who’s here to stay.

Strange to think that four years ago, Sisi was riding a wave of genuine popularity. Back then, many Egyptians had run out of patience with their first civilian head of state, the Muslim Brotherhood’s Mohamed Morsi, who had presided over a rapidly deteriorating economy, a constitutional crisis, and unprecedented public protests. The discontent and chaos culminated in a military intervention in July 2013 that put Sisi at the helm. The move was decried by Western observers as a “coup”, but heralded by many Egyptians as a salvation of the popular revolution of January 25, 2011.

At the time, a discernible sense of relief, perhaps even euphoria, coalesced around Sisi’s 2014 presidential campaign. This manifested in a curious mélange expressing the people’s support for the incumbent leader: from Sisi chocolates and underwear, to a mandate from the daughter of popular nationalist Gamal Abdel Nasser that the military strongman was the legitimate heir of her father’s legacy.

Today, both Sisi and the Egyptian people are in a considerably less jubilant mood. The always-suspect narrative that Sisi and his military regime would sustain the revolutionary impetus of the January 25 revolution has long since dissipated.

The principal goals of the 2011 protests, “bread, freedom and social justice”, are nowhere in sight. Food is more expensive than ever, with unprecedented price hikes and inflation still running at more than 20%. As for freedom, according to Human Rights Watch, Sisi’s primary accomplishment in 2017 was “applying violence and repression to decimate the rule of law and peaceful opposition”. In a recent speech, Sisi himself claimed that “calling for social justice results in the destruction of our country”.

Instead of improving the Egyptian people’s standard of living, the Sisi government’s overriding concern is an indiscriminate “war on terror”, a term that extends to violent crackdowns on political opponents.

After a public massacre of more than 800 Muslim Brotherhood supporters in August 2013, the Egyptian government declared the group a terrorist organisation. Claiming that the nation faces an existential threat from political Islam backed by foreign conspirators who want to see Egypt’s demise, the regime has spent years rounding up both Islamists and secular political opponents under the pretext of protecting Egyptians from “terrorism”.

As a recent spate of attacks has shown, Egypt does face very real security risks – but the government’s actions are only exacerbating them.

Conflating and repressing opposition groups who express any political dissent not only radicalises individuals and groups but also detracts from the country’s principal terrorist stronghold: the northern Sinai.

There, the Islamic State-affiliated Ansar Beyt al-Maqdis (or Sinai Province), capitalises on the ungoverned space in which such insurgencies typically thrive. The group strives to fan sectarian violence as it did in Iraq and Syria, most notably with an attack on a Sufi mosque in November 2017 which killed more than 300 people.

Northern Sinai has been designated a closed military zone which journalists cannot access. But with more than 100 “covert” Israeli airstrikes recorded since 2015, it is an open secret that Egypt is becoming increasingly reliant on Israel to secure this territory.

So despite his inevitable “win”, Sisi is also genuinely vulnerable. The electoral jostling of the past few weeks has shown that the strongman has not succeeded in dominating Egyptian politics to the degree he might have hoped. The (withdrawn) campaign of human rights lawyer Khaled Ali breathed a little life back into the spirit of the January 25 revolution, and subsequent calls for a boycott among the liberal opposition reveal an enduring desire for political protest of sorts. More worryingly for Sisi, was the emergence of hopeful candidates from the military, notably General Sami Anan, who was arrested for daring to stand.

While the net result wasn’t much affected, for the first time, there was a real possibility of challenges from within Sisi’s principal power base. So while his “success” is assured, Sisi comes out of the election with less support than ever and monumental challenges ahead.

Dina Rezk is Lecturer in Middle Eastern History at the University of Reading. Her work focuses on the history of the Middle East over the past two centuries, including the Arab Spring and other 21st century upheavals in the region. Dr Rezk’s research findings have led her to provide policy briefings to the UK Cabinet Office, Home Office, Ministry of Defence, Nato, and the US Department of Defense. She leads the research project ‘Social listening in the past, present and future‘.