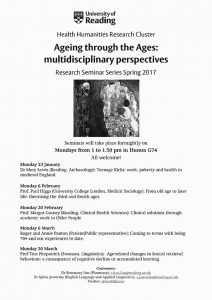 Ageing through the Ages: multidisciplinary perspectives

Roger and Annie Panton (Patient/Public representative): Coming to terms with being 70+ and our experiences to date.

My initial business experience, following a secretarial course at Mrs. Hoster’s in Central London, included working for a variety of businesses – within the property industry, the fashion industry and Human Resources. This gave me a basic grounding in the business world which I have loved working in ever since.

All of these organisations were in Central London – one story – a guy rang me one day at the company I worked for called Garrard Smith and said ‘my name is Michael Caine and I want to view a property that you have’ – well, I could have died but he insisted on collecting me from the office, taking me to the property he wanted to view and was charm personified!

Subsequently, I went on to work seriously in HR and joined a company that was starting up in the UK from the US. I had a great time within this company which was where I met Roger! The company moved out of central London into Berkshire sometime later and it was there that we decided to buy a property in Cookham village. I then worked within the property business in Slough – where my introduction to relocation was made – and at the same time Roger’s company grew in stature in Maidenhead.

Then as part of my connection with property, I came across something I thought was a good idea – moving into Oxfordshire – into a property which I had been asked to sell – so we did and I was pregnant so a. we moved and b. we had our daughter in the Radcliffe Hospital in 1979.

Village life was beautiful but I wanted to get back to where Alex might become friends with her age group more easily and we ended up coming back into Berkshire near Maidenhead where we all settled into our respective careers and bringing up our dear daughter. The friends she made here at that time are still her friends now – 32 years of friendship!

So we’re still here, getting older and having to cope with the ‘getting older’ syndrome particularly when illness creeps into the equation.