It is a rarity that an email arrives which is cause for good cheer. The invitation to speak at the Cheltenham Literature Festival—on Ghetto: A Very Short Introduction— was one of those times. It was not that I am the first person at Reading to receive such an invitation, not even the first this year. Professor Paul Luna spoke at Cheltenham a few days after me on his book Typography: A Very Short Introduction. Our publisher chose two Reading authors, out of a long list, which reflects well on our university. 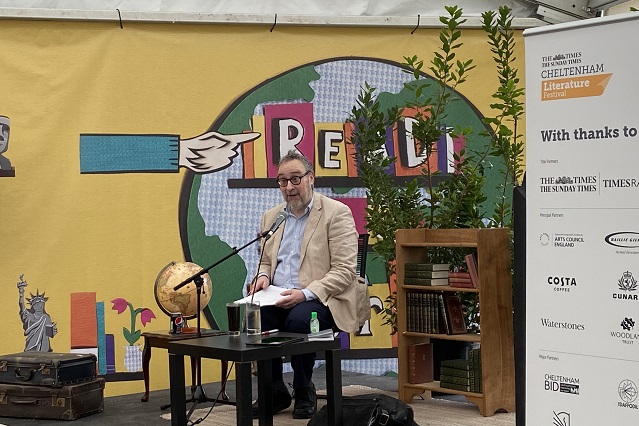 Despite the book being user-friendly, I was a little more nervous than usual in writing my talk. The London-based book festivals that I speak at tend to be full of friends and an audience that I understand. Cheltenham, in contrast, was Radio Four personified—the book-buying wing of “middle England”— and much less diverse than London. I was out of my comfort zone. What can a woke-ish (when not bloke-ish) academic do in this situation? I decided to tell the story of how my book came to be written and why I chose “ghetto” as a topic. This part was easy as “ghetto” is a word which I have lived with my whole life.

When I graduated, my parents bought me the complete works of Israel Zangwill who first popularized the term “ghetto” in the English language. His transatlantic bestseller Children of the Ghetto (1892) has been described by Patrick Parrinder (an emeritus Professor at Reading) as the first ethnic novel in Britain. Children of the Ghetto is set in the East End of London and was also a hit Broadway play. As my father was born in the East End (known today as “Brick Lane”) there is a sense that he was a “child of the ghetto”. But, in truth, he lived in an ethnic enclave rather than a ghetto as, within a generation, he was able to move to suburban Ilford.

Living in a ghetto (the word originated in Italy) meant that you were confined to an enclosed space and could not move to another residence. It was my job as a writer, I explained to the Cheltenham audience, to make clear the differences between ghettos or ethnic enclaves or slum areas. The three main historical ghettos in my book are benign Jewish ghettos in Italy (1516-1789), genocidal East European ghettos (during the Second World War), and discriminatory African American ghettos (between the 1920s and the 1970s).

At the end of the talk, a member of the audience came up to me and said that it was a pity that there was not an evocative word for “ethnic enclave” to match the allure of the word “ghetto”. A brilliant question full of self-assurance. Cheltenham, in general, was amazingly bullish about cherishing culture—which can be found in “every nook and cranny”— and in placing mountains of books at the heart of the festival. Audiences turned out in their hundreds to hear accomplished academics such as Marc Morris on his The Anglo-Saxons: A History of the Beginnings of England or Amy Jeffs on her Storyland: A New Mythology of Britain. I could not help but contrast the literature festival with university life.

Obviously, Cheltenham and the academy could not be more different. One is private and lasts a week, one public and lasts a year; one customer can afford to buy books and has leisure time, the other relies on e-resources and might have a part-time job; one institution is sold out, the other has a shrinking demographic. But, even so, all universities in these extraordinarily challenging times can learn a great deal about valuing history and culture from the self-confidence of Cheltenham Literature Festival.

Bryan Cheyette is a Professor in the Department of English Literature. Ghetto: A Very Short Introduction (2020) is published by Oxford University Press.