Since the field of pharmaceutical sciences emerged in the 19th century, it has been necessary to develop new medications to treat diseases effectively with few or even no side effects. Some of the side effects of drugs are related to the fact that drug molecules can reach and accumulate within tissues and organs that are not their targets. A well-known example of this is the drowsiness associated with the administration of some antihistamines used to treat allergies. 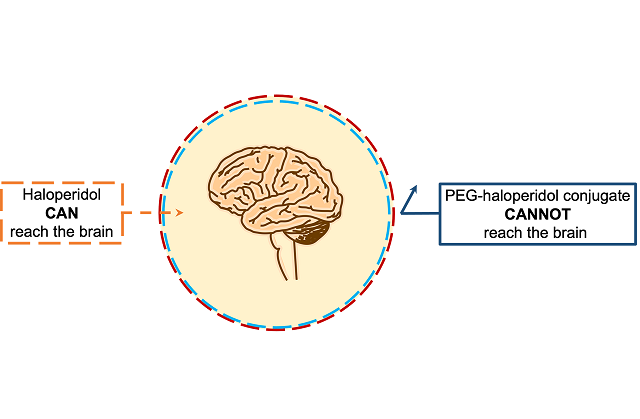 This unwanted effect (drowsiness) happens as a consequence of the medication reaching the brain across the biological barrier protecting the central nervous system. Therefore, there is a need to design new drug delivery systems that could offer localisation of drugs at the intended site or organ while reducing or even preventing their side effects associated with their penetration into other compartments. We applied the concept of nanotechnology, using molecules sized in nanometres, to develop such systems employing polymers (large molecules with repeating subunits) to prevent drugs from reaching the brain whilst maintaining their desired action outside the brain.

In this study, we evaluated the strategy of conjugating (linking together) a model drug (haloperidol) to a polymer (poly(ethylene glycol, PEG)), using a specific chemical linker, to prevent side effects associated with haloperidol. Several experimental approaches were employed to test the activity of the PEG-haloperidol conjugate. We used a radioactive compound to measure the levels of the biological activity of the conjugated haloperidol. In addition to that, computer-modelling studies were performed to examine the effects of conjugation on the interaction of haloperidol with its target receptors. Finally, and of particular significance, an animal model (namely rats) was used to test the effectiveness of the system in preventing the side effects associated with the administration of haloperidol on the central nervous system. Our results indicated that PEG conjugated haloperidol exhibited a biological activity on its target receptors. Furthermore, experiments on animals revealed that rats treated with haloperidol showed a clear indication of immobility (rats lost the ability to change their positions when placed in unusual positions after receiving haloperidol). This side effect occurred as haloperidol’s molecules reached rats’ brains. Interestingly, no side effects were observed in rats treated with the conjugate haloperidol, and these rats exhibited normal behaviour. These findings might indicate the absence of haloperidol in their brains.

In this work, we demonstrated an emerging concept for using polymers, which have been widely used pharmaceutically to improve the safety of administered drugs, to prevent drugs from reaching undesired tissues or organs while preserving their therapeutic effects. Therefore, there is wider applicability of this technology (conjugating a drug to a polymer via a specific chemical bond) in the field of drug delivery. This might include developing systems for treating diseases such as cancers. Where designing effective anticancer agents with minimised side effects would be of great benefits to the patients. In addition, it could allow using drugs for new applications that are not related to the original intended uses of these drugs but are limited by side effects related to distribution into other tissues, such as reports of using haloperidol for managing Covid-19 infections.

Az Alddien Natfji is a Research Associate in the Department of Pharmaceutics and was awarded the Research Output Prize for Early Career Researchers 2021 for the Agriculture, Food and Health research theme.