From popping lizards in pillow cases to tape-measuring a mamba, London Zoo has to come up with some creative methods for the annual weigh-in of its animals. But what can a zoo animal’s weight and size tell us about conservation of its wild counterparts? Zoo Keeper turned wildlife researcher Dr Tara Pirie explains more in a new post for The Conversation. 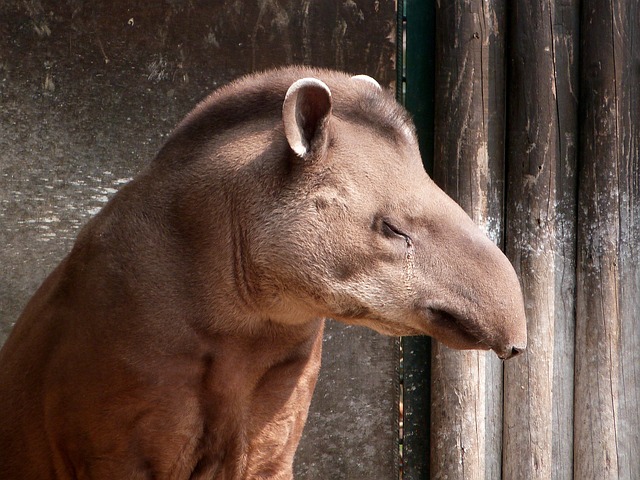 Every August, London Zoo weighs and measures every one of its 19,000 animals. It’s a great PR move for the zoo, guaranteeing lots of friendly coverage of photogenic animals on scales or next to tape measures, at a time when many politicians and journalists have clocked off for the summer.

But, as a wildlife conservation researcher and a former zookeeper, I have seen exactly how these sorts of annual “weigh-ins” also helped the animals themselves. Recording the weights and size of animals in a zoo directly benefits their welfare, and could potentially help in the global conservation of their wild counterparts.

Monitoring the health of the animals in your charge is a large part of what being a keeper is all about. You do this by getting to know the individuals and noting any changes in their behaviour each day as you would your own pet. You even assess their droppings, looking at colour and solidity – which made for interesting conversation on morning coffee breaks.

Although these observations are useful, they can be a bit subjective. By taking measurements such as weight you immediately have something a bit more concrete that can be used to evaluate well-being and review the effectiveness of husbandry methods. Also, giving the correct dosage of food supplements or medicines often requires you to know the weight of an animal.

How to weigh a zoo animal

Small creatures like snakes or lizards can be put into a pillow case and weighed using hanging scales. A trained handler can even hold venomous snake species such as a black mamba against a tape measure.

However larger mammals are a bit trickier. Whether it is a lemur or rhino, it often involves time, effort and patience to train one to walk onto a set of scales. Usually there is some form of food reward to help entice them onto the scales in the first place and then to keep them stationary long enough for a reading. For the most dangerous mammals of all, like the African leopards I worked with, zookeepers have to either target train them with food (using a stick with meat on the end) or wait until there is a reason to sedate them then weigh them.

If you think this sounds difficult, it is nothing compared to the challenges faced out in the wild. There, this kind of information is usually only gathered when the species is specifically being studied and only then typically when the animal is under sedation for research purposes (for instance to fit a GPS tracking collar).

Often the species that are being studied have been officially assessed as threatened with extinction, based on population numbers and trends, types of threat and conservation effort. Although populations need to be monitored directly over time to check for increases or decreases, they can also be modelled based on basic information such as weight, life expectancy and breeding rates to give an idea of what the population is likely to do under different circumstances.

How can scientists fill in those gaps? I attended a conference recently where a speaker was discussing the potential for utilising the data gathered by zoos to produce models for the species with missing data and assess how vulnerable they might be to climate change, habitat loss and other threats.

And zoos have a lot of data: of all the thousands of threatened land vertebrate species – everything from tigers or lemurs to colourful snakes or tiny frogs – around one in seven have some individuals held in captivity somewhere. Zoos really can fill an important role and have an impact.

This knowledge in turn could then be used to highlight where conservation efforts and often limited funding should be focused, to increase the survival chances of more threatened species out in the wild.

This post first appeared on The Conversation, 24 August 2018. Tara Pirie is a Postdoctoral Researcher in the People and Wildlife Research Group at the University of Reading. She recently completed her PhD at Reading on the ecology and conservation biology of the African leopard and other carnivores. Her current research project ‘Uncovering the hidden world of cats’ looks at the roaming behaviour of domestic cats.