In cities around the world, tiny living spaces are becoming increasingly common. An estimated 200,000 people in Hong Kong live in what are called “coffin homes” – subdivided units so small that a person cannot even fully stretch out their legs.

Such stories are exotic fodder for the British press, but in the UK too, tiny living spaces are on the rise. Over the past 20 years, the average private renter in Britain has seen their individual living space decrease from 31 sq metres in 1996 to 25 sq metres, as more and more people are forced to reside in shared accommodation. 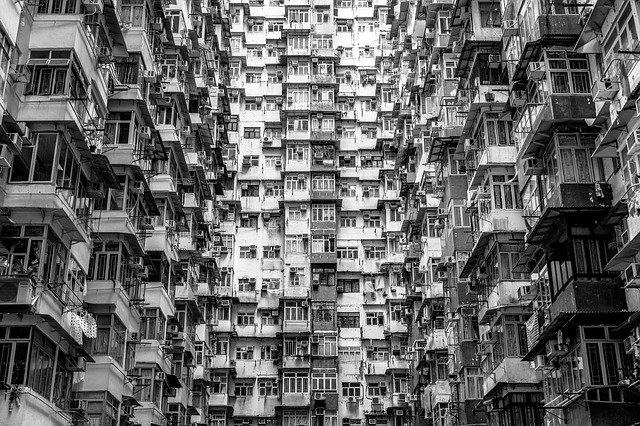 As advanced economies have become centred around urban growth, housing supply has failed to respond and the price of land has skyrocketed. Consequently, renters and new homeowners have been forced to occupy ever smaller and more expensive spaces, even as existing home-owners have seen their housing wealth multiply, their living spaces expand and their property portfolios grow. In UK, this has resulted in increased living-space inequality

Research shows that these trends have significant implications for people’s personal and collective wellbeing. As I have found, on an individual level, people’s expectations of how much living space they find adequate are not innate. Instead, they are informed by the space they are used to and the space of those around them. On a societal level, meanwhile, spatial inequality is both a product of, and further compounds, socioeconomic disadvantage.

There is no universal relationship between size of living space and subjective wellbeing. Different people and different societies use – and understand – living space in different ways. This can lead to interesting discrepancies when cultures collide.

In a study published in the early 1990s, the ethnographer Ellen J Pader recorded one Mexican immigrant saying, “I see so many Americans living on their own and I think how lonely they must be”. Because of this diversity, a small living space will not affect all people to the same degree.

Houses are what economists call positional goods: they determine our social status by effectively exhibiting our wealth and tastes. Even if a person’s living space is large enough to meet their basic needs, they may still feel a stigma (or pride) if it is smaller (or larger) than that of their neighbours, friends or family.

One new small-home owner-occuper interviewed for a recent study on housing expectations in the UK said that she felt judged by people for choosing to remain in her one-bedroom tenement flat. “It was very hard to separate society’s and friends’ views about where people should live and what achievement looks like,” she said.

One-third of the people surveyed for a 2005 study by US economists Sara J Solnick and David Hemenway said that they would prefer to have a smaller house in absolute terms, so long as it was bigger than everyone else’s. Similarly, there is evidence, also from the US, that an individual’s living space expectations are particularly affected by the size of the largest houses in the local area: when these increase in size then the housing satisfaction of nearby residents decreases. (I failed to find a similar social-comparison effect in UK or Germany, although my data was much thinner).

One could be tempted, looking at this evidence, to take a cynical view of some cultures revelling in the space poverty of others. While this may be true of some conspicuous consumers, most people probably just aspire to a “normal”-size living space, where they can practice “normal” activities in the home, such as having friends round. Being unable to do so can bring a sense of shame.

It can also disadvantage people who don’t have much space in more tangible ways. The education system in Britain implicitly expects that all households will have enough living space for children to do their homework in peace and quiet. Children in households that are unable to fulfil these norms are therefore likely to face worse educational outcomes.

By making us more reliant on our homes the pandemic has heightened the disadvantage associated with having little living space. Participants in a recent study on how COVID has changed the way we use our homes spoke about how working from home – and over Zoom – forced them admit to colleagues that they didn’t own a sofa or didn’t have a spare room.

Increasing average levels of living space, through building more homes where they are needed, would certainly help alleviate some of the more tangible negative effects of tiny living spaces. But unless we tackle the growing inequality of living space in the UK, through progressive taxation of housing wealth or by building more social housing, relatively space-poor households will continue to feel stigmatised and locked out of many social norms.

Dr Chris Foye is a Lecturer in Housing Economics at the University of Reading.