Dr Graeme Marlton explains how different clouds are named and why cloud classification matters in a new post for The Conversation. 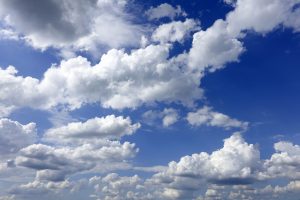 Clouds form in a multitude of different shapes and sizes, their infinite combinations and position across the sky offering a visual drama in response to the light conditions. But despite their apparent randomness, a detailed naming convention is in place to categorise them.

When a cloud ultimately can’t be fitted into one of the many existing categories, it can be nominated for a classification of its own. In 2017, the World Meteorological Organisation (WMO) added 12 new types of cloud to the International Cloud Atlas, the world standard guide for cloud classification. And I worked as part of a small team investigating the science behind one newly categorised cloud, Asperitas, which exhibits wave-like perturbations, reminiscent of a rough sea in the base of the cloud.

Clouds are named using a Latin-based system proposed by Luke Howard in 1803, which laid the foundations for the WMO cloud atlas in 1939. Clouds are separated into ten basic genera, which are shown in the image below, and are described by their shape and altitude.

For example, Cumulus, from the Latin for heaped or puffed, describes clouds with a “cotton wool” appearance. Stratus describes a low-level layer cloud with a uniform, even base that covers much of the sky. Nimbus means rain-bearing, so a cloud called Nimbostratus is a layer cloud that produces rain or, sometimes, snow.

Read the rest of this post and see images of the different cloud types on The Conversation, where this piece was first published on 27 March 2018. Dr Graeme Marlton is a Postdoctoral Researcher in the University of Reading’s Meteorology department.