What will the future of humanity look like? Ahead of tonight’s Albert Wolters annual lecture on consciousness, autonomy and responsibility by philosopher Daniel Dennett, we asked five Reading academics what big changes to technology are going to do for us in the coming decades. 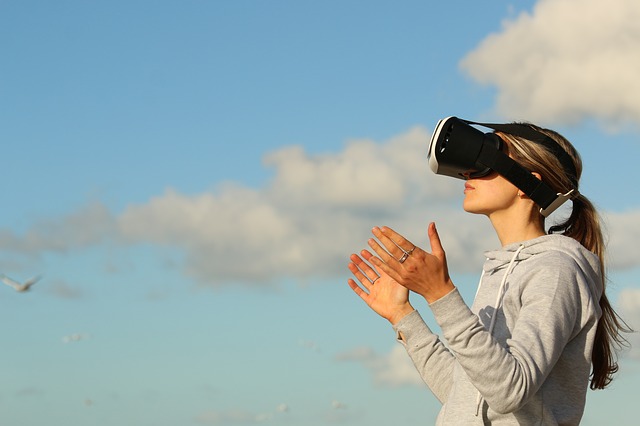 A new reality through VR

Social media has opened gateways of communication between even the remotest of places. Knowledge is digitally distributed and no longer situated in distinct geographical locations and under the supervision of experts.

The sheer movement of words and images across digital networks has revolutionised the way in which we communicate with the world around us. But what might happen if more than our words begin to move across these digital networks? What if we could be transported through them?

Virtual Reality (VR) is finally efficient and stylish enough to be mainstream, and virtual experiences now enable us to feel present in other worlds and interact with them.

We can see, touch, and hear landmarks and artefacts that would otherwise be impossible to experience (for example Matthew Nicholls’ Virtual Rome). We can navigate complex virtual worlds, feel virtual objects and respond in virtual simulations of dangerous situations. We can practise complicated surgical procedures or even train empathic skills.

In the near future, VR could provide instant access to the experiences of others and instant transportation to worlds that are as close to reality as possible, immersing us in the digital network now surrounding us.

With the technology advancing at a remarkable rate, it might not be long before VR powered by Artificial Intelligence (AI) changes the face of education, healthcare and medicine, entertainment, media dissemination and much more.

We are at the forefront of an experiential revolution that will inevitably change what it means to be human and how we live our lives.

Big brother, or no bother?

Imagine a vision of the future where the daily cycle of a traveller involves passing between different public environments. Such public spaces may one day be filled with multiple vision-based services offering a range of access, information, safety, monitoring, navigation or surveillance services. These could actively or passively support a traveller’s activities within each environment, and promote the collective well-being of these traveller spaces.

My team and I in the Computational Vision Group in the Department of Computer Science are working on future technologies just like these. I’m currently leading the EU PROTECT project on the design and development of contactless biometric-based on-the-move traveller verification for border security, enabling travellers to cross borders without stopping.

The work is aiming to answer questions such as ‘how non-intrusive can we make identity confirmation systems for border security between countries – and how fast and useable can we make these systems?’ Also, what are the limits on the use of these technologies in terms of cost-effectiveness and human rights?

No longer in the driving seat

Autonomous vehicles will very soon become an integral part of our lives and many machines will ‘see’, ‘think’ and act in ways that have been considered to be exclusively human until now.

My lab uses immersive virtual reality to study the way that humans build up a representation of the world as they move around. This is of interest to the designers of autonomous vehicles because the developers would like to replace the type of full 3D reconstruction of a scene that vehicles currently rely on.

Instead, they would like to use computationally light, task-specific representations similar to those that animals have developed. Neural networks now have become sufficiently powerful and pervasive that insights from biological researchers into the way that humans see and represent the world can be implemented in artificial systems with remarkable speed.

Technology is all around us and has the potential to be very useful – but do we feel in control of it – or do we feel a slave of technology? Are we in control or are the machines?

The latter view prevails for instance when we find technology awkward. Who is not annoyed when websites insist you create an account before progressing? Or when well-known packages have a poor interface – for instance, a single mouse click used to open a dialog box to let you read a document in the current folder – now it takes four such clicks. What is worse, the large companies don’t seem to respond when you complain!

The more positive view is that we can enhance our life with technology – at work and in leisure. AI and automation have the potential to do some of the boring tasks, leaving us free to do what is more interesting, and hopefully have a shorter working week.

The Albert Wolters Lecture, ‘Consciousness, autonomy and responsibility’ will be delivered by Professor Daniel Dennett  – a distinguished cognitive scientist at Tufts University specialising in the philosophies of mind, science and biology and is known as one of the ‘Four Horsemen of New Atheism’ along with Richard Dawkins, Sam Harris and the late Christopher Hitchens. The lecture is sold out but will be live streamed at https://www.youtube.com/watch?v=KOApAHhKCxQ from 8pm, 9 May 2019.

The Albert Wolters Visiting Distinguished Professorship is a prestigious honorary title, which takes its name from the first Lecturer in Psychology at the University of Reading (1908). It is awarded annually to internationally distinguished scholars in recognition of their world-class contribution to psychology, language sciences or neuroscience.