It’s Dementia Action Week. Reading researchers are tackling the problem of dementia on all fronts, from investigating its causes to how we can improve care and quality of life for those it affects. Today we speak to Professor Arlene Astell, who uses sound and video to trigger long-term memories in people with dementia and get them talking again. 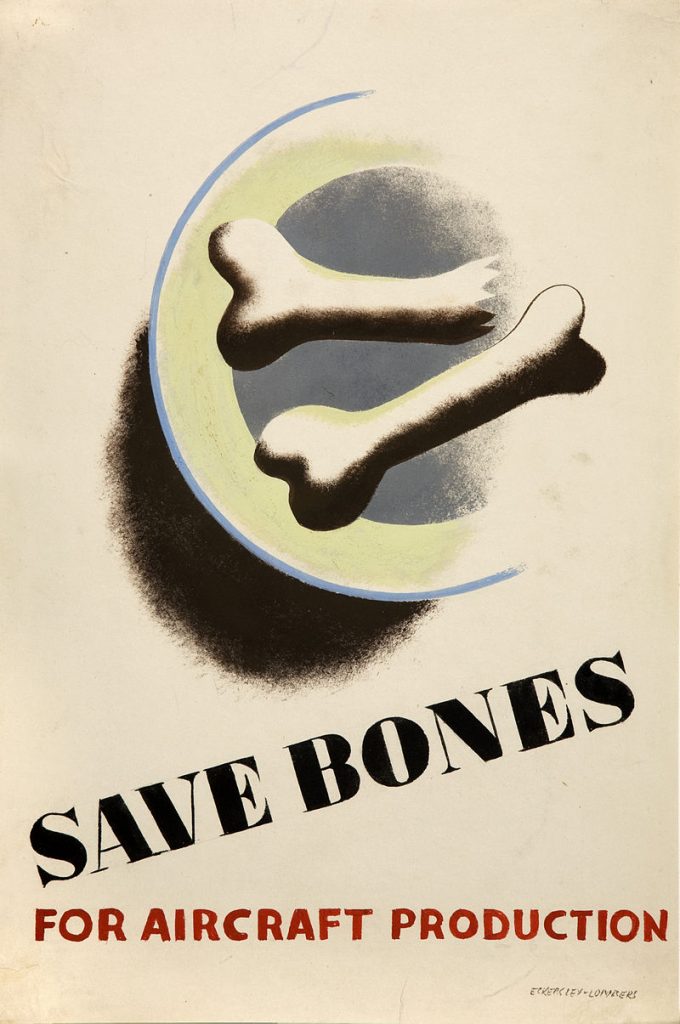 “People with dementia often withdraw from social interactions, lose confidence and feel embarrassed about their condition – their world shrinks. We want to find ways to stimulate their mind and memories and improve their quality of life,” explains Arlene Astell, who is Professor of Neurocognitive Disorders in Reading’s School of Psychology and Language Sciences.

“One of the questions we’re asking in our research is ‘What makes life more enjoyable for people with dementia – what are the activities and pastimes they can do that give them the same pleasure and satisfaction that they had before?’”

Arlene and colleagues are doing this through the use of technology. Working with the BBC to use their sound and TV archive they have developed touch-screen software, called the Computer Interactive Reminiscence and Conversation Aid (CIRCA). The software uses audio and video clips of evocative sounds, music and images from the past – such the whine of an electric milk float, a picture of a 1950s street scene or a recording of Winston Churchill speaking on the radio.

Sights and sounds of the past

The idea is to use this to tap into people’s long-term memories, which remain intact despite the disease’s ravages on short-term memory. The sounds and images encourage people to start a conversation about the material and makes them more equal partners in those conversations. 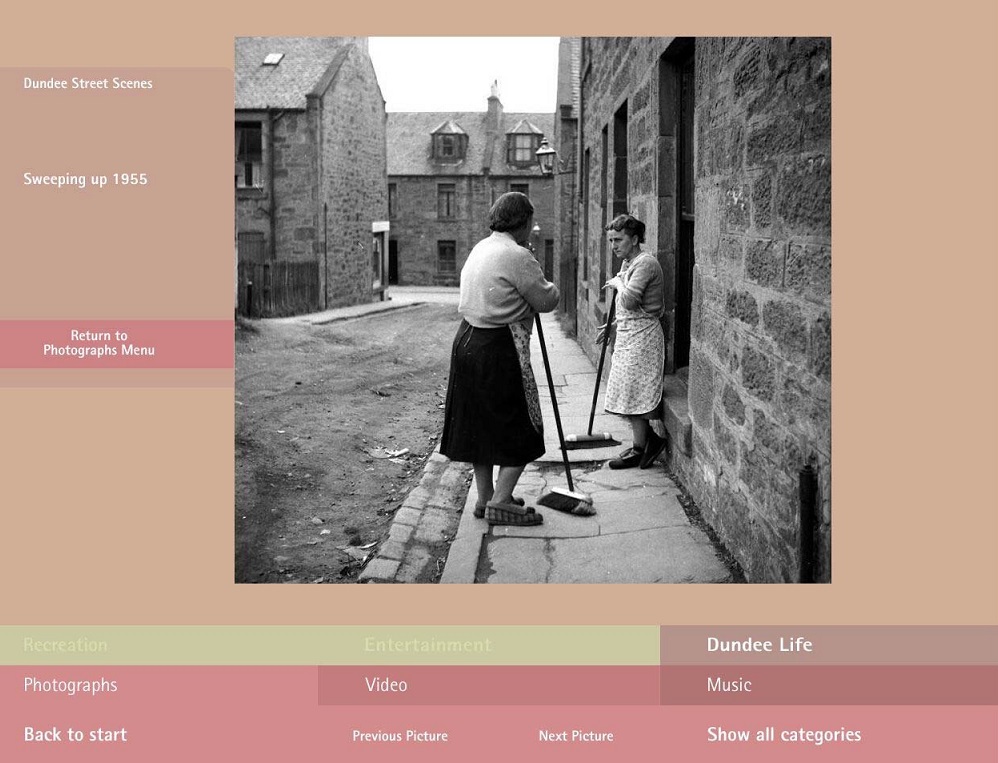 An evocative image from the CIRCA software, designed to stimulate reminiscences in people with dementia.

A research study carried out in care homes using CIRCA twice a week as a group activity showed that it significantly improved both cognition – the ability to learn, understand and reason – and measures of quality of life in 60% of the people who took part. What’s more, the effect could still be seen in the people who had been in the study three months later.

The BBC provided some of the archive material used in CIRCA and it has now developed a publicly accessible online Reminiscence archive to help people with dementia. It was launched last year and is free for anyone to use. The research team and BBC are currently seeking more funding to develop CIRCA for use in the NHS and hope to see it rolled out over the next couple of years. 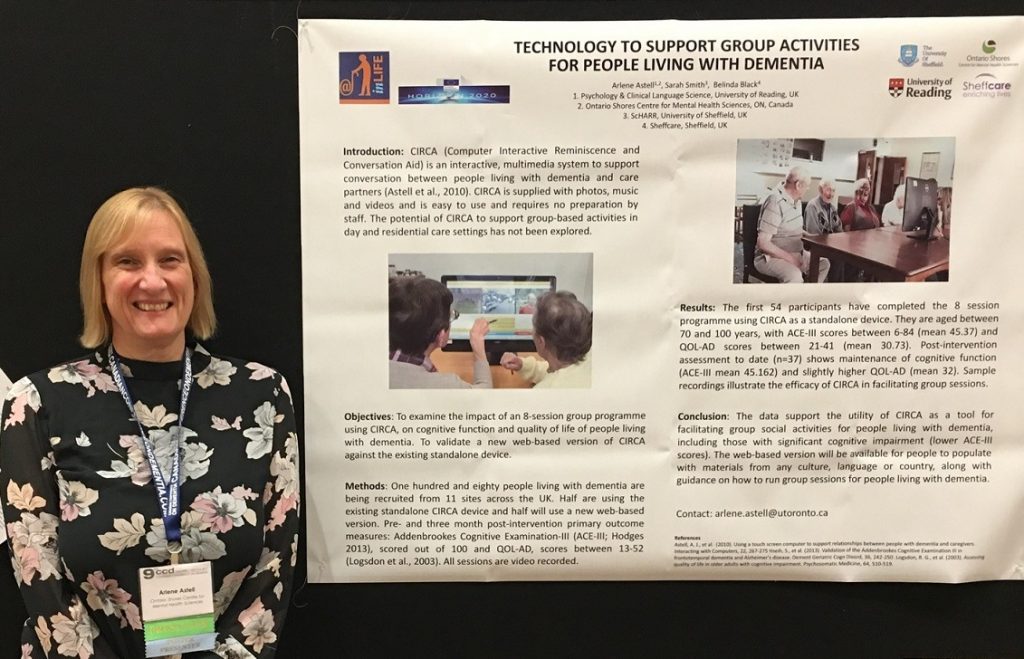 Arlene presenting her work on CIRCA at the Canadian Conference on Dementia, November 2017.

Arlene’s research group is also exploring the benefits of off-the-shelf motion-sensing computer game technology (such as the X-box Kinect) for people with dementia. A trial in 38 people with dementia who played a bowling game for an hour twice a week over 10 weeks were able to learn and master the game and improve over time. They learnt to play independently while being watched and encouraged by others, as a fun social activity.

“They were able to teach others to play the game, which gave them back some confidence. Mastering new activities has a positive impact on caregivers, because they see people with dementia in a new light, and games such as this can provide an inter-generational activity too.”

“We’re really hitting our stride with digital solutions now. Since tablets were introduced in 2010 there’s been a rapid expansion in commercially available products and there’s been a lot of excitement and claims about the potential of the technology – which aren’t always backed up with the clinical evidence. The focus now needs to be on seeing how these technologies can fit into people’s lives, what aspects of our cognition they can enhance, and how we can take advantage of that,” explains Arlene.

“There are no drugs to treat dementia and the numbers of patients are growing. So we want to enable people to live as well as possible after a dementia diagnosis until the end of their life, focus on what they can still do rather than what they can’t, and increase their social engagement.”

Arlene recently published a book with her former colleague from University of St Andrews, Dr Maggie Ellis, ‘Adaptive Interaction and Dementia – how to communicate without speech’ which explains practical ways – such as imitation, sounds, eye gaze and touch – to aid interaction people with dementia who can no longer speak. The book is being translated into German and will become compulsory reading for all trainee nurses in Germany.