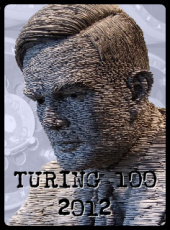 This Saturday (23 June) the School of Systems Engineering will be staging the famous Turing Test to mark the centenary of the birth of Alan Turing, mathematician and code-breaker. Turing100 takes place at Bletchley Park and visitors can see if they are able tell the difference between a computer and a human.

Cybernetics professor, Kevin Warwick, Chair of the School of Systems Engineering’s Turing100 project, writes about what the Turing Test says about us.

Perhaps the most important point here however is that people tend to over-value humans and how they communicate. The test considers a comparison between machines and ALL humans – however many humans have little of importance to utter and even then they make many mistakes when they do so; as Agatha Christie put it “Man is an unimaginative animal”.

The largest set of Turing Tests ever, at Bletchley Park on June 23, will give us an insight into how far the best machines have come. But maybe they will tell us even more about ourselves as humans than they do about their own individuality.