Money matters was the theme of the University of Reading’s annual Children’s Christmas Lecture. With puzzles, questions and role play it was enthusiastically received. Here, economic historians Adrian Bell and Tony Moore summarise some of the key ideas from the lecture, which explored the development of money as a concept over time. 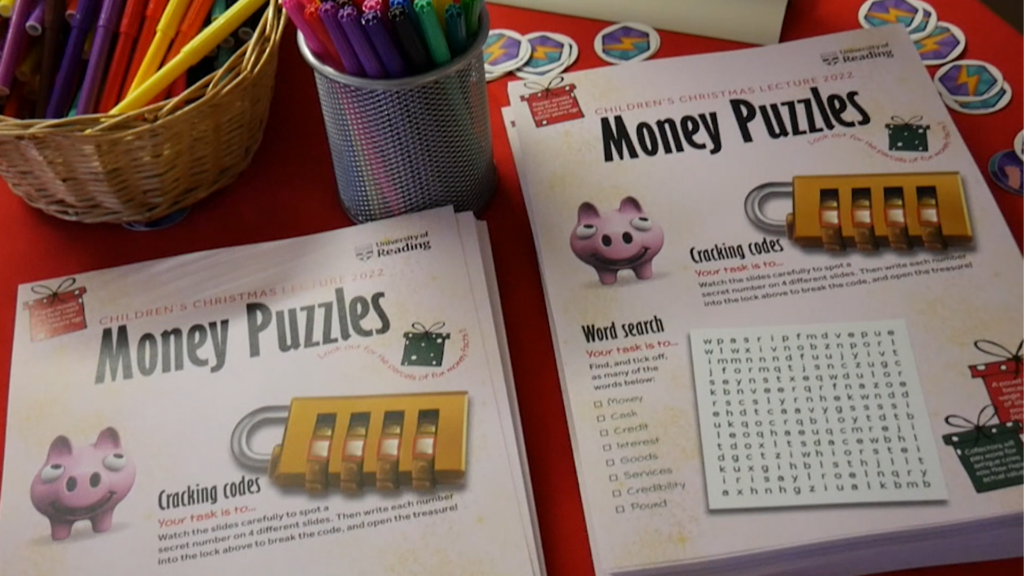 History shows us that money can be many things: from sea shells (used in the Americas, Africa, Asia and Australasia for long periods), to paper notes (from Chengdu in China c.900AD, the first paper money in history), salt (widely used, for example in Ancient Egypt and nineteenth-century Ethiopia), coins, and cryptocurrencies such as bitcoin. Some economic historians even consider mobile phones to be money.

Most money today is not in the form of coins and notes but exists as deposits in bank accounts which we access by electronic means such as bank cards, phones and watches.

Money does not have any inherent value – it is worth whatever we believe as a society it is worth. We accept lots of different things to represent money, and as we can see from examples such as cryptocurrencies, it doesn’t even have to exist in physical reality.

Money is not fixed forever but linked to the culture and beliefs of different times. Money can be seen as a distributed form of ‘social credit’ – simply put it is an agreed unit of account or measure of value that can be used when allocating and exchanging resources.

The concept of credit

Money changes value over time and not always to our benefit.

We can earn money by working, investing, or starting a business. We can buy things with cash but also with credit – and pay it back with interest added. And although it can be appealing to pay small amounts over a longer time, it is more expensive in the long run. I can pay £50 today for something or agree to pay £5 per month for 12 months. This is easier for me to manage in my budget, but will cost me £60, so I will actually pay much more for the same thing.

The concept of credit was the same for our ancestors – and sometimes they had sophisticated methods of moving money around without any money changing hands. In medieval Europe this would be achieved via a bill of exchange, the precursor of the cheque and chequebook.

Some fellow economists have described the development of money as following a historical process that moves from barter to coins to credit. However, the discovery of clay tokens recording debts from around 2000 BC in Mesopotamia (modern-day Iraq) suggests that credit came before coins and accountancy (keeping a record of financial transactions), predating the development of writing.

So, money is just a concept – it works if we all believe in it – like Tinkerbell from Peter Pan. Problems arise when credibility or trust in the system is lost.

As an example, let’s look to the actions of our former Chancellor of the Exchequer, Kwasi Kwarteng. Many commentators argue that his mini budget panicked the financial markets as they lost trust in the UK’s fiscal stability and as a result destroyed the UK’s financial credibility. He himself now admits he ‘got carried away’ and was too impatient: ‘There was a brief moment and the people in charge, myself included, blew it’.

For political impartiality we should also acknowledge that the current Chancellor, Jeremy Hunt, quickly acted to calm the markets – by reversing almost everything Kwarteng had proposed and thus restoring some element of financial credibility.

As economic historians of medieval Europe, we have researched how this period saw trade networks expand and the first banks and accounting introduced via Italy. We have looked at medieval financial innovations involving wool forward contracts, sovereign credit and defaults, foreign exchange and real estate bubbles.

We will conclude by asking you to think carefully when people tell you that things related to money are new and have never happened before.  As we have explored in this blog – we can often find a historical parallel.

Professor Adrian Bell is Research Dean for Prosperity and Resilience at the University of Reading and Dr Tony Moore is Lecturer in Finance at Henley Business School.