It’s never been more crucial to undertake a full medical check-up for planet Earth, and satellite instruments provide an essential technological tool for monitoring the pace of climate change, the driving forces and the impacts on societies and the ecosystems upon which we all depend.

This is why hundreds of scientists will be milling about the Space Park Leicester at the UK National Earth Observation Conference talking about the latest innovations, new missions and new scientific discoveries about the atmosphere, oceans and land surface.

For my part, I will be taking a relatively small sheet of paper showing three current examples of how Earth Observation data is being used to understand ongoing climate change based on research I’m involved in.

The first example involves using satellite data measuring heat emanating from the planet to evaluate how sensitive Earth’s climate is to increases in heat trapping greenhouse gases. It’s important to know the amount of warming resulting from rising atmospheric concentrations of greenhouse gases, particularly carbon dioxide, since this will affect the magnitude of climate change we will need to adapt to and the severity of impacts that can be avoided with the required rapid, sustained and widespread cuts in greenhouse gas emissions. However, different computer simulations give different answers and part of this relates to changes in clouds that can amplify or dampen temperature responses through complex feedback loops. New collaborative research led by the Met Office shows that the pattern of global warming across the world causes size of these climate feedbacks to change over time and we have contributed satellite data that has helped to confirm current changes.

The second example uses a variety of satellite measurements of microwave and infrared electromagnetic emission to space along with ground-based data and simulations to assess how gaseous water vapour is increasing in the atmosphere and therefore amplifying climate change. Although there are some interesting differences between datasets, we find that the large amounts of invisible moisture near to the Earth’s surface are increasing by 1% every 10 years in line with what is expected from basic physics. This helps to confirm the realism of the computer simulations used to make future climate change projections. These projections show that increases in water vapour are intensifying heavy rainfall events and associated flooding.

In the third example, we exploit satellite-based estimates of precipitation to identify if projected intensification of the tropical dry seasons are already emerging in the observations. My colleague Caroline Wainwright recently led research showing how the wet and dry seasons are expected to change, and in many cases intensify, with global warming. But we wanted to know more – are these changes already emerging? So we exploited datasets using satellite measurements in the microwave and infrared to observe daily rainfall across the globe.

Using this information and combining it with additional simulations of the present day we were able to show (and crucially understand why) projected intensification of the dry season in parts of South America, southern Africa and Australia are already emerging in the satellite record (Figure 1). This is particularly important since the severity of the dry season can be damaging for perennial crops and forests. It underscores the urgency in mitigating climate change by rapidly cutting greenhouse gas emissions, but also gauging the level of adaptation to the impacts of climate change needed. This research has just been published in the Geophysical Research Letters journal. 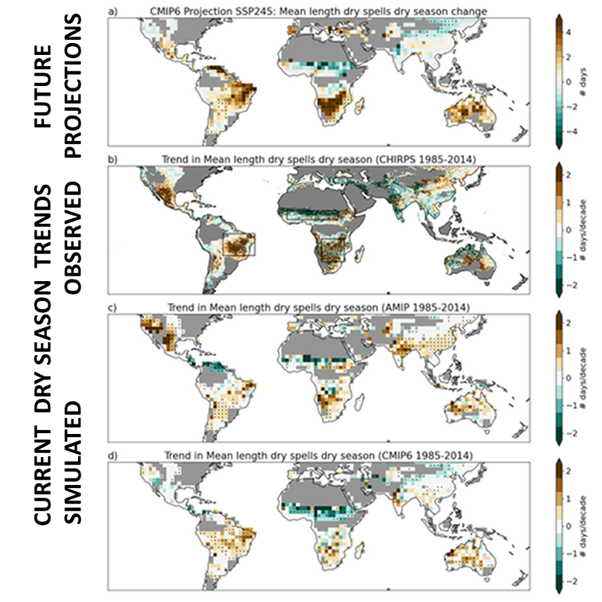 There is a huge amount of time, effort and ultimately cash that is needed to design, develop, launch and operate satellite missions. The examples I am presenting at the ukeo.org conference highlight the value in these missions for society through advancing scientific understanding of climate change and monitoring its increasing severity globally

Richard Allan is Professor in Climate Science in the Department of Meteorology and National Centre of Earth Observation at the University of Reading.