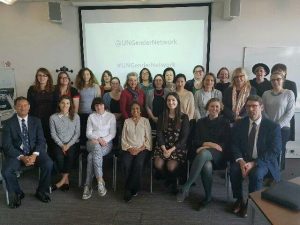 Professor Rosa Freedman ran a series of events at the University and at the UK Foreign and Commonwealth Office aimed at addressing gender inequalities within the United Nations.

The first of those events, ‘Working Globally’, was attended by hundreds of academics the Midlands and South of England to hear panellists from the UN and UK FCO talk about the importance, benefits and challenges of women working in senior positions at the UN. That event was followed by high-level workshops aimed at producing policy reforms that will address the visible and invisible barriers to women applying for or progressing to senior positions within the UN. More information about that project, the AHRC-funded ‘UN Gender Network’, and reports of the workshops and ongoing research can be found here. Anyone interested in attending the next Network event, to be held at LSE Women, Peace and Security Centre on 7th November, may register here.