Each year, hundreds of bonfires are lit across Northern Ireland on 11 July – Eleventh Night – by Protestants, Unionists, and Loyalists. The vast majority pass without incident. However, each year a small number of bonfires are mired in controversy as individuals and groups use them to signal political and social opinions about both their own community and the “other side.” 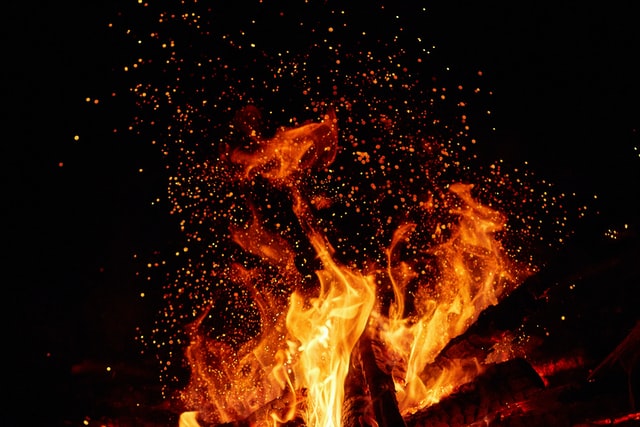 My research indicates these controversies have developed since the 1990s through changes in the practice of bonfires that exploit vulnerabilities left in the wake of the formal peace process. This signals that “peace” cannot be taken for granted – particularly as new challenges posed by Brexit enflame tensions.

While historically linked to commemoration of the Battle of the Boyne – also marked by marches on 12 July – bonfires have become increasingly decoupled from this event. They now build group spirit and strength (in particular within Loyalist groups who claim responsibility for the structures) as well as to draw a boundary between this “in-group” and their “out-group” (including Catholics, Nationalists, and Republicans).

Bonfires during the Troubles are remembered as relatively casual affairs as neighbours gathered around piles of scrap wood and tree branches, often collected by local youth. However, these began to change around the time that paramilitary groups declared ceasefires in the early 1990s.

The changes in the last three decades are visually striking: the largest “monster” bonfires now reach over 100 feet tall, built out of rings of wooden pallets (often internally supported by rubber tyres) as organisers compete for bragging rights. These are impressive feats of engineering, requiring significant material and practical support; the largest bonfire in 2021, at Craigyhill, was reported to be over 140 feet tall and constructed from over 17,000 pallets. Builders of this year’s structure at the site intend to break a Guinness World Record.

More controversially, these monster bonfires are increasingly adorned with sectarian symbols – from effigies and campaign posters of prominent nationalists, to Irish tri-colour flags and signs reading “KAI” or “KAT” (acronyms for “Kill All Irish” and “Kill All Taigs,” using a derogatory word for the same group). These were new additions as the Troubles began to wane, with flags first appearing in discussion of the structures in 1994.

Where these bonfires cause controversy or pose risks to health and safety, little can be done by those outside the community to control them.

Firefighters attempting to control the spread of flames have previously come under attack, while those involved with efforts to deconstruct bonfires before they are lit have found it necessary to work under police protection and cover of darkness, even when local politicians and residents have been in support of removing the structure. In other cases, the threat of violence has seen contractors refuse to participate in dismantling structures.

While there have been increasingly loud calls to discourage sectarian demonstrations and to celebrate bonfires safely, including from politicians, activists, and community groups, efforts to impose limitations or encourage changes to practice have also been heavily resisted.

That is because these changes have not emerged out of a vacuum. Instead, they are a response to decades of concerns among some in the Protestant, Unionist, or Loyalist community that they are being “left behind” by the peace process.

Bonfires have thus become a key red line for those responsible, who use them to reassert territorial control and political power. This has serious implications for the future of peace, as this strength can be leveraged not only to influence political debate but also to support the kinds of violence which emerged in response to the Northern Ireland Protocol in spring 2021.

After Belfast City Council tried to place an injunction on bonfires in 2017, prominent Loyalist Jamie Bryson accused Sinn Féin of starting a “cultural war.” In the same year, those celebrating at Sandy Row complained that it was “not fair the kids have to suffer” after funding for their children’s celebration was retracted due to concerns about the size of the main pyre.

Political support for reigning in bonfires has also been made conditional on other factors, signalling their symbiotic relationship with other aspects of life. The DUP withdrew from a Derry and Strabane District Council working group concerned with the issue in 2021, citing issues of “disenfranchisement” within the council. This included the implementation of the Protocol and the decision by the council not to mark Northern Ireland’s centenary.

Changes to bonfires over time signal the vulnerabilities of the peace established in 1998, particularly as many of the same groups lighting and controlling these structures are the ones who are directly challenging that peace in many other ways. From street riots to formally withdrawing support for the Good Friday Agreement, these actors are eager to show their control over the future of the region.

Dr Amanda Hall is Lecturer in Politics and International Relations at the University of Reading.

This blog is an abridged version of the article ‘Loyalists assert themselves through controversial bonfires…‘, first published on Slugger O’Toole.